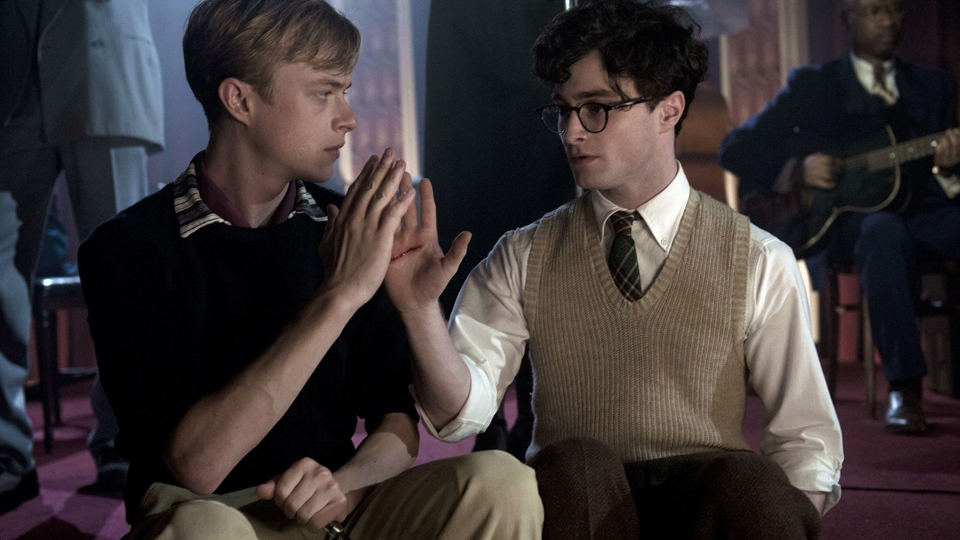 The Double
In The Double, Jesse Eisenberg plays a man who is slowly driven mad when his much more charismatic doppelganger—also played by Eisenberg—appears and begins to overshadow him in all aspects of his life. Even aside from the quirky concept, it’s clear from the start that this is a film operating within its own set of rules, and director Richard Ayoade does a fantastic job of building a grimy, industrialized world of shadows. It’s surreal and grim at the same time, yet it still feels like a place that we want to spend time in, if only to see just how bizarre it can get. Eisenberg, too, does daring work, distinguishing his two characters in subtle but instantly recognizable ways and bringing his signature snarky humour to the part. It’s not a warm or feel-good film, yet the madcap humour of Ayoade’s vision makes The Double a surprisingly entertaining watch.
MMMM — Colleen Munro

Joe
The fact that Joe is perhaps Nicolas Cage’s most toned-down, realistic role in years says a lot. However, while this is a movie with a sly, irreverent sense of humour and moments of surprisingly brutal violence, director David Gordon Green still manages to avoid sensationalism and tells a gritty, grounded tale of a teenage boy, Gary (Tye Sheridan), who befriends a scraggly outlaw, Joe (Cage), in hopes of finding a job. Green really captures the dire circumstances that Gary and his family are in without it ever feeling too manipulative, and by sprinkling in a variety of local, non-professional actors into the supporting roles, he gives this Southern tale a true feeling of authenticity. While the film’s mixture of prolonged, mood-driven scenes and sudden emotional outbursts gives it a slightly unsettled tone, Joe is a strong effort overall from all those involved.
MMMM — C.M.

Hotell
Swedish director Lisa Langseth somehow mines a sweet and frequently funny film out of the dark matter of postpartum depression with her latest film, Hotell. The film begins very dramatically, as we see the harrowing effect that a complicated birth has on first-time mother Erika (Alicia Vikander, A Royal Affair). However, she soon joins group therapy and ends up taking off on an unlikely road trip with a group of newfound friends to temporarily escape their overwhelming lives. Boosted by a searing lead performance by Vikander and a delightfully quirky supporting cast, Hotell shows the devastating effects of depression, yet it also offers a hopeful but unsentimental message of self-discovery in the film’s second half. It’s not a comedy per se, yet it successfully finds humour in some of the darkest experiences people endure.
MMM½ — C.M.

Night Moves
Director Kelly Reichardt seems to enjoy testing the patience of the squirmier moviegoers with ponderous films like Meek’s Cutoff and Wendy and Lucy. Her latest film, Night Moves—which stars Jesse Eisenberg, Dakota Fanning, and Peter Sarsgaard as three radical environmentalists who plan to blow up a dam—is no different.
With Night Moves, Reichardt combines her signature lingering camerawork and slow pace with compelling character drama to let the film’s impact really sneak up on you. Reichardt leaves magnificent breathing room in her movies, and that provides a nice juxtaposition to the tightly wound characters of Night Moves. Eisenberg in particular gives a brilliantly measured and internalized performance. Gone is the jittery banter he’s known for; instead, the emotional weight of the film more or less rests on his expressive face. He need only slightly clench his jaw or raise an eyebrow to tell us what he’s thinking.

Reichardt shows that you don’t need elaborate character backstories or even much dialogue to make an emotionally affecting film. All of those moments of half-heard conversations and long shots of landscapes aren’t just there to be artsy. And when the credits began to roll, I was left with the unmistakable feeling of having seen something truly special.
MMMM½ — C.M.

Beneath the Harvest Sky
Though it may cover familiar teen drama territory, Beneath the Harvest Sky is ultimately a potent film as a result of the respect shown to its characters. It evokes the hazy boredom and defeat of small town life through its two main characters, Caspar (played brilliantly by Emory Cohen) and Dominic (Callan McAuliffe), who long to escape their dead-end town but lack the means to do so. The dynamic of their relationship is really what ensures that Beneath the Harvest Sky succeeds. The film’s crime storyline never quite kicks into gear convincingly, and many of the film’s supporting players feel like nonentities, yet I found something oddly moving about watching Caspar and Dominic attempt to muddle their way through life against the backdrop of gorgeous cinematography and a searing soundtrack.
MMMM — C.M.

Kill Your Darlings
Kill Your Darlings follows Allen Ginsberg (Daniel Radcliffe) at the start of his stint at Columbia University. There, he manages to get sucked into a countercultural movement led by a charismatic, sly young rebel by the name of Lucien Carr (Dane DeHaan, The Place Beyond the Pines). However, as is the case with most tales of excess, things take a turn for the worse and the fun and games threaten to vanish before the young men even make it out of college.

There is an undeniable, volatile chemistry between Allen and Lucien, which becomes apparent when the boys first meet during one of Lucien’s regular outbursts in the school library. DeHaan has an especially commanding presence on the screen, both relishing Lucien’s showmanship and delving into the depths of his bruised psyche.
However, considering the anti-establishment bent of the film’s characters, Kill Your Darlings comes across as a fairly standard telling of a familiar (albeit true) story. It’s The Great Gatsby, it’s A Separate Peace, and it’s The Talented Mr. Ripley. The film would also be stronger without the cliché scenes featuring Allen’s mentally fragile mother. Somehow, the free-spirited lifestyle of these young beat poets comes across as a touch superficial
MMM½ — C.M.

Devil’s Knot
Atom Egoyan is one of Canada’s most celebrated directors thanks to films like The Sweet Hereafter and Exotica, but you wouldn’t know it from his messy, mishandled new film, Devil’s Knot. It follows the trial of the West Memphis Three, in which three teenagers accused of being Satanists were wrongly convicted for the murders of three young children in 1993. In the end, Egoyan’s execution here is too unfocused to forgive. For example, nearly all of the most interesting information about the case’s ambiguity is relayed through expository text placed on the screen at the end and throughout the movie. He would have been better off focussing more on the character of the grieving mother (played well by Reese Witherspoon) and giving her a satisfying arc, rather than trying to display every side of the story.
MM — C.M.