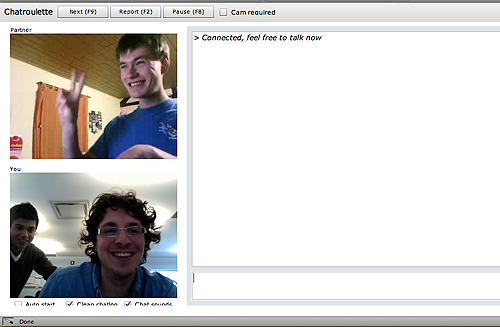 If you haven’t been privy to the Internet-phenomena that is ChatRoulette.com, I’d recommend giving it a look. The website, which has been up and running since November 2009, was created by a 17-year-old high school student in Moscow as a way for him and his friends to randomly meet strangers online.

Using it is simple. Press “Play,” and you’re automatically connected via webcam with a stranger, anywhere in the world, to (ideally) have a conversation with. Outside of the obvious appeal of an opportunity to meet people, Chatrt.com offers an interesting self-sociological experiment: how do you behave when you’re anonymous and free from the standard constructs of social repercussion? Even if you don’t take anything away from the upwards of 20,000 potential webcam chat-mates that are online at any given time, you might just learn something about yourself.

Just so you aren’t shocked, or if the potential of a site like Chatroulette hasn’t already occurred to you, be warned: many people use chatrt.com as a venue to act out sexual compulsions. Many young men, in an effort to inspire more intimate conversation with the opposite sex, exercise their keenest circumlocution and fine-tuned flattery—“Show me your boobs!” being a staple of this sort of courtship. Many others don’t even wait for a visual queue before beginning their partly-auto-amorous-endeavor. They just troll along, mid-effort, waiting for that special someone to not hit the “next” button.

The voyeuristic appeal has a marked effect on the patronage of the site. Like most pornographic Internet sites, its fan-base is largely male. That’s not to say that Chatroulette is a pornographic website, but to ignore the fact that in using this website you will see a certain amount of penises would be a glaring oversight.

While some seek cyber-promiscuity (or, depending on how you look at it, true love), others satisfy different means of catharsis. Yesterday, while researching the site, I was told by a young man in the United States mid-west that, based on the fact that I was on my computer talking to people over the internet, I would die alone. He then “nexted” me as he laughed to his friends.

This sort of random verbal violence can be jarring, but the whole experience did help me consider the appeal of this site. It is addictive. I sat there for two hours playing with it. (The website). And after my brief altercation with the rude Midwesterner in the River’s Cuomo glasses, stewing and wondering why a person would be such an ass to a stranger, I considered my own behavior. The only reason I stopped to talk to those people was because the two girls he was with were cute. I had been “nexting” all the men that appeared on screen as soon as their pictures rendered. What, then, were my intentions, if not purely analytical?

There are raw animal impulses that exist in each of us, which for the sake of social boundaries, we restrict. How much of our natural existence is shaped by this? And, how much can we safely realize these impulses, if we so choose to, through something like Chat-roulette? I can only deduce that this is the main appeal of the site. Furthermore, why is it that mostly men seek out this sort of outlet? Is that societal, or a reality of natural male/female sexuality?

Maybe I’ll get online and ask somebody.