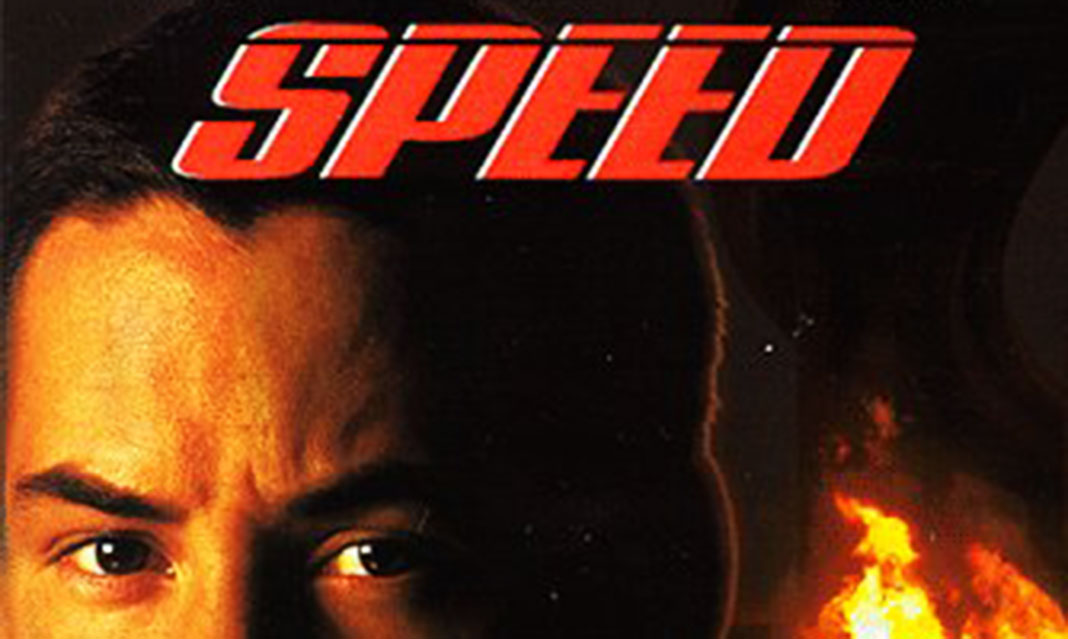 A ticking bomb on a moving bus. Fight scenes on a moving subway. A starry-eyed romance between a young Keanu Reeves and Sandra Bullock. Speed (1994) stands out amongst most action films, elegantly composed of action-packed sequences and an untimely romance.

Unlike many other action films, Speed doesn’t dwell on an unnecessary background story. With a bomb threatening the lives of those stuck in an elevator and a ransom of 3.7 million dollars, SWAT team members, Jack (Keanu Reeves) and Harry (Jeff Daniels) attempt to diffuse the bomb. As a sacrifice, Jack releases the bomber, Howard, for the lives of the others in the elevator.

All of this unravels within the first 20 minutes of the film.

What’s startling about the film is that the characters and audience know the face of the bomber from the very beginning. He’s not an enigma, but a visible and active force in the film.  It was a clever creative choice by the director to highlight the menacing efforts of the perpetrator along with building the frustration and helplessness in the audience. We know who he is but can’t stop him.

Under antagonizing efforts of the bomber, he teases Jack with yet another task. Same bomb. Same ransom. This time, on a moving bus that will set off the bomb if travelled under 50 miles per hour. With every movement watched by the attacker, Jack abides by the instructions, but his hope guides him to rescue the passengers.

When chaos and frantic passengers erupt on the bus, Annie (Sandra Bullock) a young, quirky passenger steps up and takes control of the situation. Her immediate actions and calmness settle not only the frantic passengers, but Jack as well. Annie’s appearance, humour and charisma adds a settling effect to the situation and moments of intensity in the film. The connection that forms between Jack and Annie appears peculiar given the situation but nonetheless natural. Furthermore, the on-screen chemistry between the two makes you forget for a moment what’s at risk.

The final sequences of the film reside on the relationship formed by Annie and Jack as they attempt to capture the man behind the bomb. Between the battle of a love interest and duties as an officer, the decisions lie on Jack.

From the beginning until the end, this film is packed with non-stop anticipation and suspense, unlike many other action films. Somehow, the seamless pacing of events and the action sequences aren’t overwhelming. This balance found within the film must be credited to the on-screen romance of Jack and Annie. However prevalent the cliché love story may seem between a young stud and the girl next door, this romance is necessary to the nature of the film. Jack and Annie’s relationship is the heart of the film and adds an enjoyable contrast to the intensity of what’s at stake.