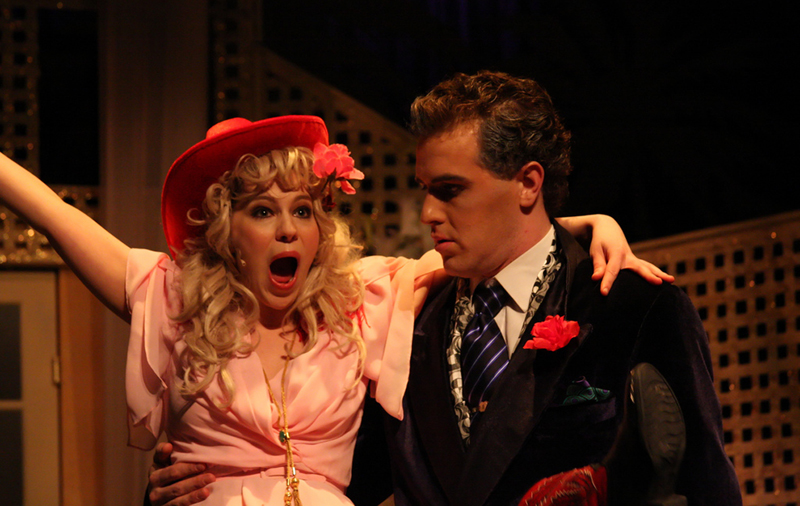 Things are starting to heat up at Hart House these cold winter days as Jeremy Hutton’s Dirty Rotten Scoundrels: The Musical reels the audience into the heart of the exotic French Riviera, featuring a stage tossed with glitter, palm trees, and luscious curtains. Based on the 1988 film starring Michael Caine and Steve Martin, Hutton’s adaptation isn’t too concerned with establishing a plot up front; rather, it launches straight into an exuberant song and dance overture, which sets up the equally elaborate entrance of Laurence (Neil Silcox), a dapper prince and con artist known for wooing the ladies out of their riches.

The debonair conman hosts fanciful parties at his grand summer villa, yet he gets more than he bargained for when he meets and invites Freddy (Evan Dowling) to his lavish home. Freddy is another charismatic con artist, yet he is unrefined in speech and etiquette, and though Laurence would never consider Freddy a youthful reminder of himself, the English aristocrat agrees to teach the frumpy American how to be smooth and alluring. However, Laurence soon realizes there is no reforming Freddy, and the two soon find themselves in a bet to see who will be the first to charm and con a woman out of $50,000. The loser must leave the French coast and is only permitted to work in a few desolate parts of the world, including Mississauga, according to Laurence (he really is a snooty one).

The rest of the performance more or less follows the hijinks and predicaments both men find themselves in as a result of their deceitful sweet-talking. But the real focus is on the musical side of things. With a whopping 24-song program over the course of two acts, the musical numbers seem almost separate from the main plot, as if the dialogue between songs is only included to string them together. Nevertheless, choreographer Ashleigh Powell’s sequences are quite entertaining, especially those like “Giving Them What They Want”, in which the entire ensemble comes together in a Hollywood Golden Age routine, and “Ruffhousin’ with Shuffhausen”, in which Laurence, disguised as psychiatrist Dr. Emile Shuffhausen, puts Freddy through some rigorous “treatment”.

There are a number of other colourful characters, including a wealthy heiress from Oklahoma (Lea Russell) and a corrupt yet charming French police officer and confidant to Laurence (Cameron Johnson).

Russell delights as an excitable and bubbly southern belle and plays the part quite well. Johnson’s impeccably tuned French accent and suave delivery of much of Scoundrels’ clever dialogue won him major laughs from the audience, and although he doesn’t occupy a lead role, he stands out as one of the musical’s strongest and most endearing characters.

But the stars of the show are Silcox and Downing, who complement each other greatly onstage; scenes such as the introduction of Ruprecht are particularly amusing and present their great chemistry. Just as Laurence mesmerizes his guests with a snap of his fingers, so too Silcox entrances the audience as he masterfully conveys the regality and pomp of a high-brow millionaire. Dowling also wins great favour for his daring and risqué antics, at times reminsicent of Animal House, and shows that roug-and-tough is more fun than prim-and-proper. Both actors showcase their comedic strengths, great voices, and overall ability to convey two entirely opposing personas while still playing off each other perfectly.

Although the musical could have used more of the original narrative at its core, the performances were bursting with energy and grandeur typical of the Roaring Twenties. David Yazbek’s music and lyrics whisk you away into a fantasy world of glitz and glamour—after all, he’s just giving us what we want.