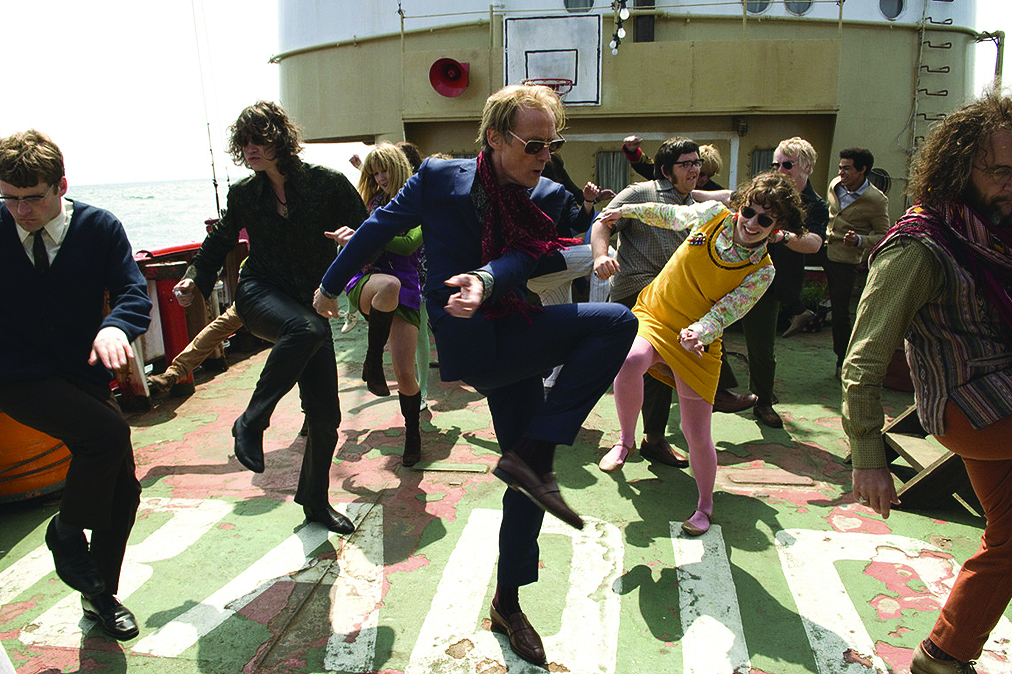 Imagine a world without the legacy of The Rolling Stones, Jimi Hendrix and The Kinks. A world where the government frowns upon freedom and where guitar riffs and racy lyrics have no place. This was the impending fate of rock ‘n roll in Britain circa 1966. The future didn’t look promising, but since when have people conformed to the rules? Welcome to the era of UK pirate radio.

Loosely based on Radio Caroline and the experiences of numerous pirate radio operators of the 1960s, Richard Curtis’ Pirate Radio tells the fictional story of a band of rogue DJs aboard the infamous Radio Rock, an offshore pirate radio station that broadcasts rock ‘n roll music in the North Sea (and much to the dismay of the British government, just outside of their jurisdiction). Yet that doesn’t stop Minister Dormandy (Kenneth Branagh, Hamlet) and his aptly named sidekick, Twatt (Jack Davenport, Pirates of the Caribbean), from finding alternative ways of shutting down the station, such as the invention of the Marine Offences Act, which of course has little effect on the rebellious disc jockeys.

Led by the Count (Philip Seymour Hoffman, Capote), it’s all sex, drugs and rock ‘n roll as Radio Rock’s 24/7 on-air antics are broadcast to the rock-worshipping masses. When a final turn of events threatens the crew’s rebellious cause, they must adjust their morals or suffer the consequences. Claiming to be the first radio station to say the “F” word on air, declaring young Carl’s (Tom Sturridge) loss of virginity to half the nation and broadcasting the greatly anticipated marriage of Simon and Elenore (Chris O’Dowd and January Jones) which falls apart after only 17 hours, Radio Rock wins the hearts of 25 million listeners, whose lives were revolutionized by the DJs who fought for freedom and changed the voice of a nation.

Though more of a parody than a factual documentary, Pirate Radio uses the overindulgent nature of the 1960s to its advantage, and goes all out in its ridiculous depictions of drunken misconduct and sexual innuendo. One of the plot’s central elements is the development of a relationship between Carl and his long lost father (Ralph Brown), whose obsession with the past makes it difficult for him to accept the present. Though the film is essentially a string of isolated events, moments such as these are effective reminders of how self-oriented people can find happiness in the company of others.

While most of the cast is obscure to North American audiences, certain actors such as Nick Frost (Hot Fuzz) and Bill Nighy (Pirates of the Caribbean) are familiar and stand out as the films most well-developed and humorous characters. Tom Brooke plays the hilarious Thick Kevin, who describes Jesus as “a nice guy with long hair, no shoes, lots of friends and he wore a dress,” while Tom Wisdom plays Midnight Mark, a heartthrob DJ who doesn’t say anything at all, but manages to woo all of his female listeners. Yet the captain’s seat belongs to Philip Seymour Hoffman, and though his portrayal does not match up to his past Oscar-nominated performances, he still manages to make a lasting impression as the passionate American God of the airwaves. On another note, though many of the songs featured in the film were released after 1966 and do not truly represent the chart toppers of that year, Pirate Radio‘s soundtrack still remains one of the films strongest elements. With the likes of Cream, The Who, and The Hollies, the songs capture the spirit of the 60s and do well to unify the film’s sometimes disjointed scenes.

While Radio Rock stands for an unsinkable ideal, even their idealized society has its flaws. The DJs’ lives are defined by live in the moment attitudes and pleasure-seeking impulses, but when their lifestyle is threatened, their vulnerability becomes quite evident. The British government is also an exaggerated extreme with its overly strict nature and opposition to change that doesn’t appeal to the masses as Radio Rock does. The two lifestyles clash repeatedly without a resulting victor, which just goes to show that neither society is perfect, and a balance must be achieved before any real progress can be made.

The emphasis on the influence of rock ‘n roll is one of the film’s major concerns, but its underlying and more prominent theme is the back and forth struggle for freedom against censorship. Pirate Radio highlights the mockery that a group of rebellious individuals want to make of a government that stands in their way, but their desire to achieve the unthinkable isnt attained without a fight from the opposition. Nevertheless, the film is pure entertainment, and with the help of risqué British comedy and the film’s stellar soundtrack, Pirate Radio is easily able to stay afloat.