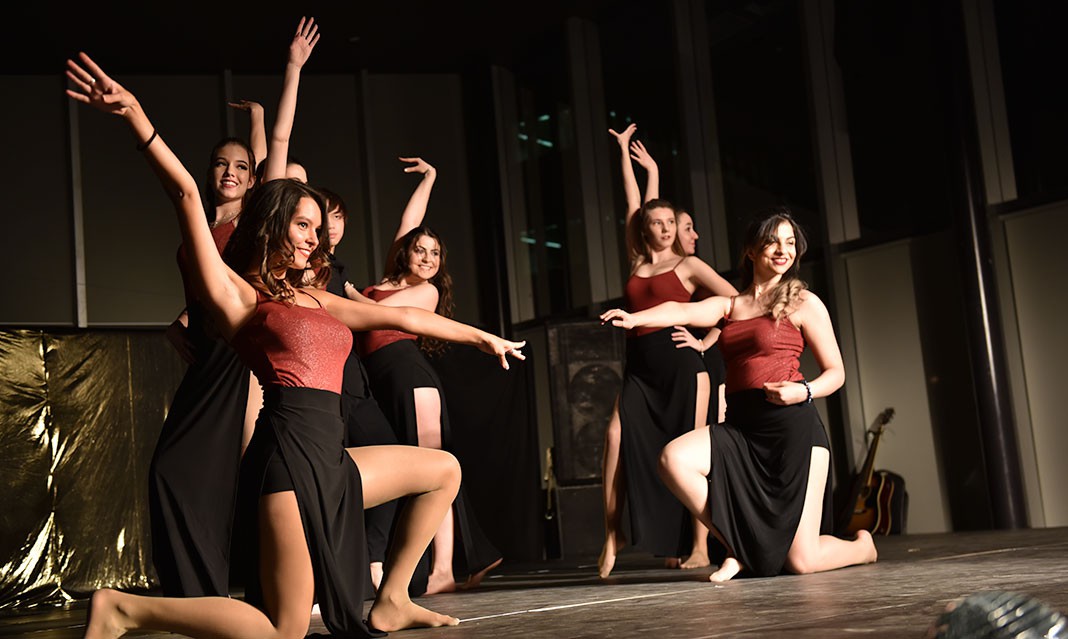 Experience Style & Profyle 2016 in photos and read about it below.

On March 4 and 5, The Blind Duck opened its doors for the first night of Time Warp, a charity dance and fashion show. The inside of the pub was transformed, adding an extended stage, a backstage walkway, colourful bar-side decorations, mood lighting, and tons of confetti.

Style and Profyle is a non-profit student club at UTM that supports local charities through presentations of the arts. The charity being supported at Time Warp was SKETCH—a Toronto-based arts charity that allows marginalized youth to be involved in music, drawing, dance, and many other forms of artistic expression. All proceeds went towards SKETCH’s initiatives and all prizes awarded during the show were given by sponsors.

Time Warp opened to a mix of people standing at the bar and sitting in chairs—the spaces in between filled as the night progressed, packing the pub with cheers for the 20th century dances.

Doors opened at 6:30 p.m. and the hosts—Corey Belford and Ayesha Anand, president of Style and Profyle—took the stage at 7:20 p.m.

Time Warp was made up of a group of dances moving forward through 20th century styles. The first dance to hit the stage was a 1930s swing, a rhythmic performance with groove and attitude. The next was a jazz performance by the UTM Dance Club set to a postmodern jukebox cover of “Seven Nation Army”. The distinction in movements between the male dancer and the female dancers was a nice feature that added dimension to the performance.

An intermission in the performances introduced the second component of Time Warp: a designer fashion show. A line of models walked out of the backstage walkway onto the stage, showed off, and exited. The line, by Rhenice Bowman, was based on the 1950s jean-and-leather crazes. The 1950s continued with a saucy cha-cha performance set to the classic mambo song “Sway”.

The third component of Time Warp was song. In the first song performance of the night, halfway through, Jillian Robinson took to the stage to sing the 1960s hit “Natural Woman” by Aretha Franklin. The powerful performance led into Justine Lyn’s 1960s fashion showcase and into the intermission, concluding the first half of Time Warp.

After a 20-minute intermission for drinks and discussion, the stage lights came to life with an introduction to SKETCH. This is when I realized the problem with the venue. By this point in the night, the seats and most of the bar space were taken up. With drinks on the table, the audience was difficult to control and the chatter often drowned out whatever the hosts were saying—at least near the middle and back of the room.

The show continued nonetheless with a funky 1970s dance performance set to “Stayin’ Alive” by the Bee Gees. Wearing bright tops and glow bracelets, performers sprang to and from the corners of the stage.

After the ’70s performance, it was announced that the ’80s would inexplicably be skipped, missing a great opportunity for some upbeat song and dance.

The ’90s started off with a designer showcase by Aicha Diallo. Female models entered the stage wearing skin-tight beige dresses. A model entered wearing a bright red top with a beige skirt, introducing a splash of colour to the stage. Finally, the showcase concluded with a model wearing a flowing, airy red dress with a golden necklace.

After a three-man hip-hop feature, a strong performance of “My Heart Will Go On” by Aseel Aoun, the highlight of the ’90s was an extremely well done and synchronized belly dance performance. The middle-eastern themed performance elicited high-pitched calls from the back of the audience and went back and forth with irregular tempos but was executed flawlessly the whole way through. The UTM Dance Club concluded the ’90s with a large group performance of classic ’90s hip-hop with sweatpants and flannel aplenty. It was somewhat redundant having two hip-hop performances, but I can’t blame them for starting and finishing the ’90s with hip-hop.

To Style and Profyle’s credit, they did save the best for last. Local dance group In The End performed a flawlessly coordinated remix of today’s and ’90s hits. With modern dance moves and ’90s attitude, they rejuvenated the crowd for one last hit. The show came to a somber conclusion with Arlind Kadiri’s acoustic performance of “How Deep Is Your Love” by Calvin Harris and a vocal performance of “Apologize” by OneRepublic.

There was a long, awkward pause when Belford called out to the performers to come up on stage, but they eventually ran out in a flurry of dance and laughter and lined up along the back of the stage in a semicircle, with Anand coming out last, announcing the conclusion of the first day of the show.

Despite the occasional missteps, the slightly out-of-sync movements, and the audience’s nonstop chatter, it wasn’t a bad show. “Some of these people aren’t dancers,” said Anand. “It’s about having fun and giving back.” I have to agree. I saw a lot of the same faces up on stage over and over again. It takes a lot of dedication and practice to dance the whole night, switching outfits and remembering all of the moves. But to give others the opportunity to do that was worth it.