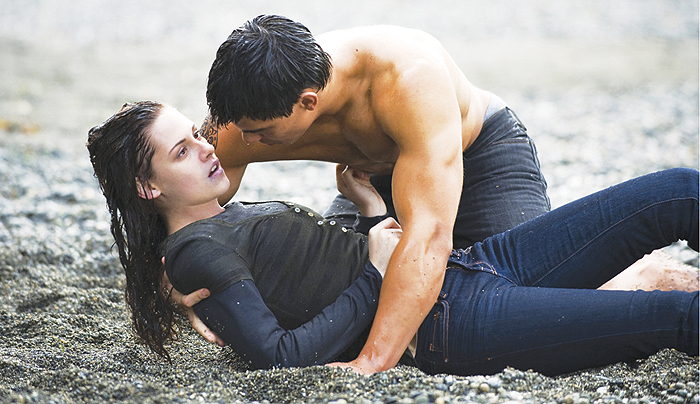 Forbidden love is in the air, and fans bitten by the vampire bug are back for more. New Moon, the second installment of Stephenie Meyers Twilight saga, continues the story of Bella Swan (Kristen Stewart) and her ever-seventeen vampire boyfriend, Edward Cullen (Robert Pattinson).

Directed by Chris Weitz, New Moon explores some of the dangers vampires, even the human-friendly Cullen family, pose towards humans, the hidden vampire world and its laws, and the introduction of new supernatural beings—the werewolf pack.

New Moon opens with Bella and Edward in a meadow. Bella sees her grandmother across the field. While introducing Edward, Bella realizes that the white-haired figure opposite her is herself many decades later, while Edward remains seventeen. This dream represents a recurring theme in the movie: Bellas fear of aging, and her wish for Edward to turn her into a vampire.

The scene continues with Bellas eighteenth birthday. At a party held at the Cullens lavish home, Bella accidentally nicks herself on some wrapping paper. The tiny paper cut looks innocuous enough, but the single drop of blood dripping onto the carpet sparks off a deadly chain reaction among the Cullen vampires, who still hunger for human blood despite making the conscious decision to only consume animal blood. The very next day, Edward leaves Bella, the Cullen family disappears, and Bella falls into a spiraling depression.

Pattinson and Stewart have great physical chemistry, but Edward seems a little too monotone and lifeless in his interactions with Bella at the beginning of the movie. Edwards brooding good looks might stun movie viewers, but Jacob Black (Taylor Lautner) steals a good portion of the spotlight and the movie. Jacob pulls Bella out of her depression, and a hint of romance builds between them, spoken through Jacobs lingering hands on Bellas while teaching her to ride a dirt bike and the many times he tries to hold Bellas hand or kiss her, only to be foiled by other people or the ringing of the phone. Stewart, like the character she plays, comes alive when she is on screen with Lautner.

Lautner plays Jacob, a gangly and long-haired teenager who likes tinkering with mechanics, as well as Jacob after his werewolf transformation. Jacob, after he has turned wolf, looks mature, extremely fit and very different from the teenage mechanic, and Lautner captures the transformation well.

Readers of the novel will be pleased with the movies pacing. New Moon jumps straight into the action with little unnecessary scenes, and sets up foreshadowing early on in the movie. Reminiscent of the novel, the beginning of New Moon shows a flash of a scene that occurs later on in the movie—Bella running through a crowd of crimson-cloaked figures. The movie is set up well for the revelation of the Volturi, Jacobs revelation of his werewolf heritage, and for Victoria, the vampire who continually hunts Bella as revenge for her dead lovers death. New Moon, in comparison to its movie predecessor, contains much more action, but does not leave out the crucial interactions between the characters.

New Moon excels in its cinematography. There are beautiful vistas of Italy, dark silhouettes of autumn trees against a night sky, meadow scenes and rolling grasslands. The only problem with the stunning backgrounds is the lighting: Forks, where New Moon is primarily set, is renowned for its foggy, misty days, allowing the vampires to move without revealing their inhuman, glittering skin, whereas the movie contains far too many bright, sunshiny scenes.

There are often close-ups, both of the actors and of important details, such as the burning of Bellas bloody bandages in a silver bowl to eliminate the potent smell of blood in the Cullens home. New Moon speeds through Bellas long months of depression with the camera turning in circles, alternately showing an expressionless, almost catatonic Bella and the view outside her window, which changes from summer, to autumn and winter with each revolution. This calls into mind the act of turning the pages of a book; like the New Moon novel, the movie simply states the month (October, November, and December) with background music and no dialogue to show the passing of time.

The special effects in New Moon are spectacular. The werewolves, in particular, appear extremely lifelike and realistic, while subtle changes in the eyes and body language clearly convey the wolfs thoughts and emotions. The use of alternating slow motion and the speeding up of scenes to illustrate the vampires and werewolves inhuman strength, speed and agility is a definite improvement from the comic tree-leaping feats Edward pulled off in Twilight. One of the most exciting scenes in the movie (other than the entire Italy arc with the Volturi, where Pattinson finally wrenches back the spotlight) is the Quileute werewolves hunt and chase after Victoria.

New Moon, with its larger budget, has better cinematography, special effects and sets than Twilight, but viewers can thank screenwriter Melissa Rosenberg for the movies solid storyline and steady pacing. New Moons makers know their audiences well—they included plenty of shirtless shots of Jacob and Edward. Other than a few eyebrow-raising comical moments, such as Bellas hallucinations of Edward (who appears as a ghostly apparition whenever she puts herself in danger), New Moon is a solid movie that will appeal to both fans and new viewers alike.