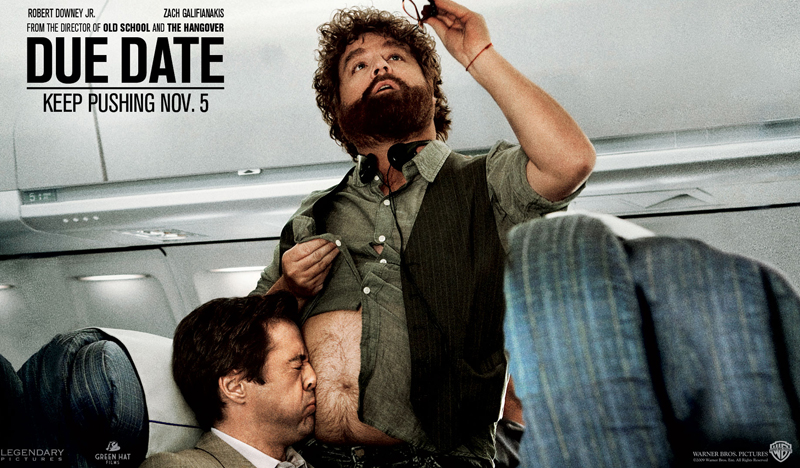 First Todd Phillips gave us The Hangover, and now he delivers Due Date, an off-the-wall buddy-comedy about two extremely different men who take a road trip and get into all sorts of hijinks. Sounds a lot like John Hughes’ 1987 film Planes, Trains, and Automobiles, doesn’t it? Well, for the most part, it is. Except we need to remember that Phillips is nothing like Hughes and if you think you can predict what will happen in this absolutely outrageous movie, you’ve got another thing coming.

It should be made perfectly clear that the main characters are definitely not buddies, as Peter (Robert Downey Jr.) stresses to Ethan (Zach Galifianakis) on more than one occasion. The two play your typical polar-opposite pair who have been thrown into the traditional road trip scenario shortly after being thrown off of a plane, heading from Atlanta to LA; Ethan Tremblay travelling to Hollywood to fulfil his dream of becoming an actor, and Peter Highman making the trek home from a business trip in time for his wife’s C-section. With no hope of finding his lost wallet or a rental car, the high-strung expectant father accepts a ride with the naïve, overly open actor on a road trip across the southern states. As expected, shenanigans ensue.

Yes, the plot still sounds a lot like Trains, and on paper they seem rather similar. Except Phillips took the idea of Trains, dropped it on its head, got it high, and beat it up. While John Hughes was brilliant at pulling dramatic moments out of comedy, Trains is not nearly as hilarious as Due Date, which is all right because Phillips isn’t going for the touching moments—he’s going for the “OMG! WTF?” moments. The director’s fingerprints are all over this movie, from the bizarre situations that Peter and Ethan land in, to the zany characters themselves. He even has a cameo as drug-dealer Juliette Lewis’ tenant.

While the humour is unmistakably the same ridiculous, vulgar fun apparent in The Hangover, the characters in Due Date manage not to end up in as much trouble—even though they break about 40 laws! There are car crashes, high-speed pursuits, drugs, theft, violence (Downey’s character goes through hell physically), and they get away with all of it. Well, of course they do—it’s a movie, after all.

But what is most enjoyable is that instead of the John Hughes ending where both men resolve their differences and become buddies, these characters don’t change! All right, so stressed-out Peter mellows slightly and learns to control his temper a little better, but that’s all. He still only just tolerates Ethan, whose own character growth is also rather minimal. Nevertheless, it wouldn’t be realistic for both men to have a personality overhaul in just a few days, though that’s not to say that what happens in the movie is realistic in the slightest. Yet even in a ridiculous comedy, the depth of a character is important.

Peter is definitely not your average “straight man”, regardless of what Downey’s deadpan sarcasm would have you believe. The character is not a nice man—there are incidents involving unruly children and desk clerks which prove this—but he is willing to go through anything to be with his wife for the birth of their child. Ethan, by extreme contrast, is the most preposterous character—take his acid-wash skinny jeans, for example—and yet there is a real vulnerability about him, which Galifianakis lets out in strategic bursts throughout the film. Both actors are watchable in anything, and in particular, their partnership with Phillips in Due Date is what keeps audiences gasping for breath between laughs.