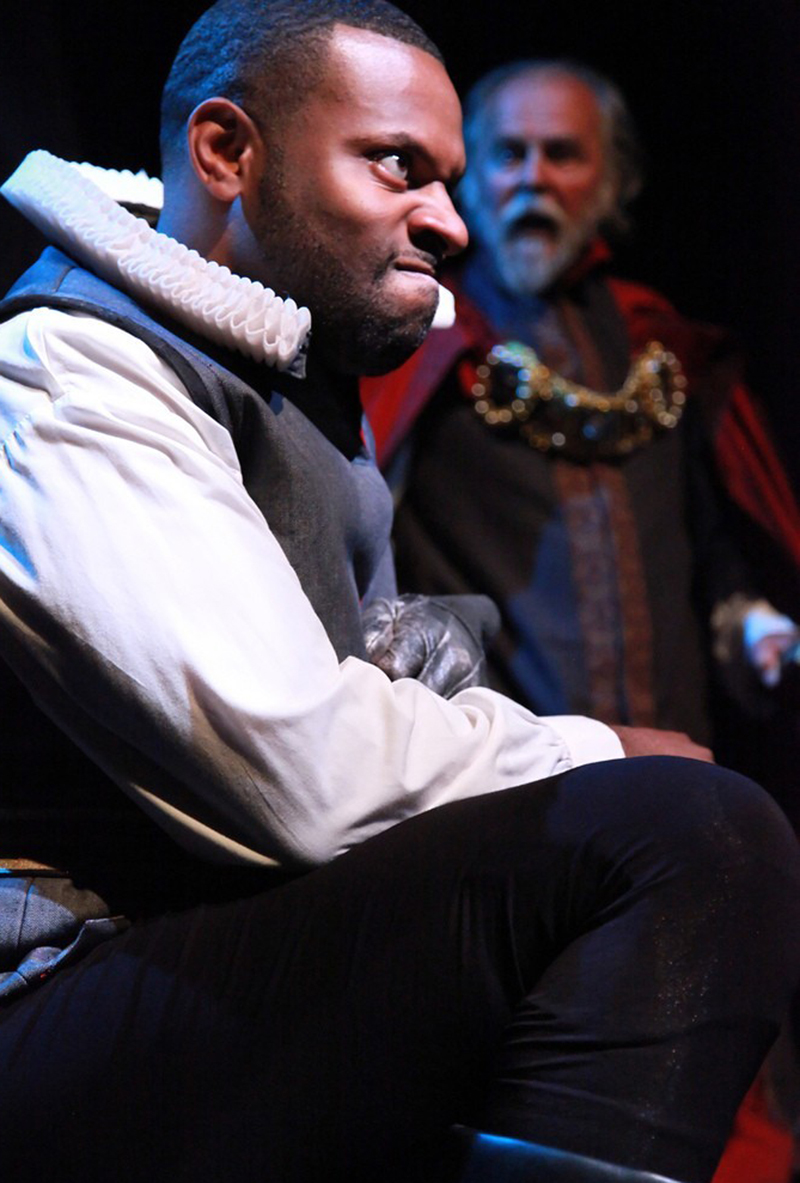 “Now is the winter of our discontent made glorious summer by this sun of York.” This phrase has gone down in history as one of the most famous utterances by one of the most tyrannical villains in English literature. And it is without reservation, but with historical accuracy and creativity, that director Jeremy Hutton does justice to one of Shakespeare’s bloodiest histories, Richard III.

This rendition of the play actually begins at the end of Henry VI Part 3. This is a clever choice on Hutton’s part, as this scene provides insight into the mind of the villain; it makes sense to start with his first murder, instead of with the famous lines above. It was under the sun of York that the battle of Tewkesbury was won, and the stage is set for the scheming Duke’s bloody rampage.

Even from his opening lines, it was clear that Richard—played by the impeccable Andre Sills—would steal the performance and keep every audience member glued to his every move. He does not disappoint; from those famous opening lines, to his scheming soliloquies, to his duplicitous interactions with other members of the court, Sills embodies the villainous King Richard with ease. Besides the power and persuasion he brings to the king’s speech, Sills physically portrays the hunchbacked king by limping across the stage with his shrivelled-up, lifeless hand pinned to his chest, and the performance is a veritable tour de force.

Annemieke Wade also gives a memorable performance as the cursed Queen Margaret. Delivering her anguished, frenzied speeches throughout the play, Wade plays the part with intensity and force. Her curses upon the kingdom resonate across the stage, and she reappears throughout the performance as a sinister, witch-like figure. Hutton’s choice to transform the grieving, embittered Queen Margaret into a wrathful, almost demonic creature works well with the dark theme and setting of the play.

The theme of darkness is indeed prevalent throughout the entire piece. The stage, props, and costumes all seem to reflect the darkness and austerity of Richard’s wicked soul. Instead of any elaborate props or set pieces, the design is minimal, with tall dead trees lining the back of the stage, all covered in thin, black shrouds. The shrouded branches light up at various moments in the play, as in during Richard’s scheming soliloquies; when the rest of the stage is blackened, the spotlight is on him, and only the mangled branches of the dead trees behind him are outlined with light. The tables and chairs are covered in the same black shroud and tied with rope; there are no ornate decorations present on stage.

Hutton uses this effect to mirror Richard’s twisted mind and allow the audience to see the world through his maniacal eyes, and through the darkness which permeates his soul.

The use of lighting and sound serves to highlight and enhance the world of Richard III. Each time a murder is underway, as a character shrieks and wails, the light music is replaced with the sound of a loud, screeching violin, and the backdrop beyond the shrouded trees turns blood red. This effect projects each victim’s pain and agony onto the set itself, and allows the audience to feel like part of the sinister plot as well.

Several times throughout the play, Hutton uses a series of montage-like scenes in which the stage darkens, with the spotlight resting on one or a few characters. This allows for the story to progress quickly and for entire scenes to be played out in a matter of seconds, giving certain parts of the play a movie-like feel. A strong, resounding soundtrack of Celtic-inspired music is used throughout the play, varying from soft and quiet to loud and screeching, and accents the context of the scenes it appears in.

The experience of Richard III, through the creative direction of Jeremy Hutton, offers an intense and memorable look into the mind and machinations of this deformed, scheming, and tyrannical king. The creative use of sound, lighting, and set design offers the perfect framework through which the powerful performances of Sills, Wade, and the rest of the cast shine through. The design and montage-like scenes add an aspect of modernity and newness to the play, all the while grounded in the traditional Shakespearean atmosphere and experience. Richard III is a performance sure to thrill and entertain.

Richard III runs until October 2 at Hart House Theatre. Visit the website at www.harthousetheatre.ca for performance times and ticket prices.