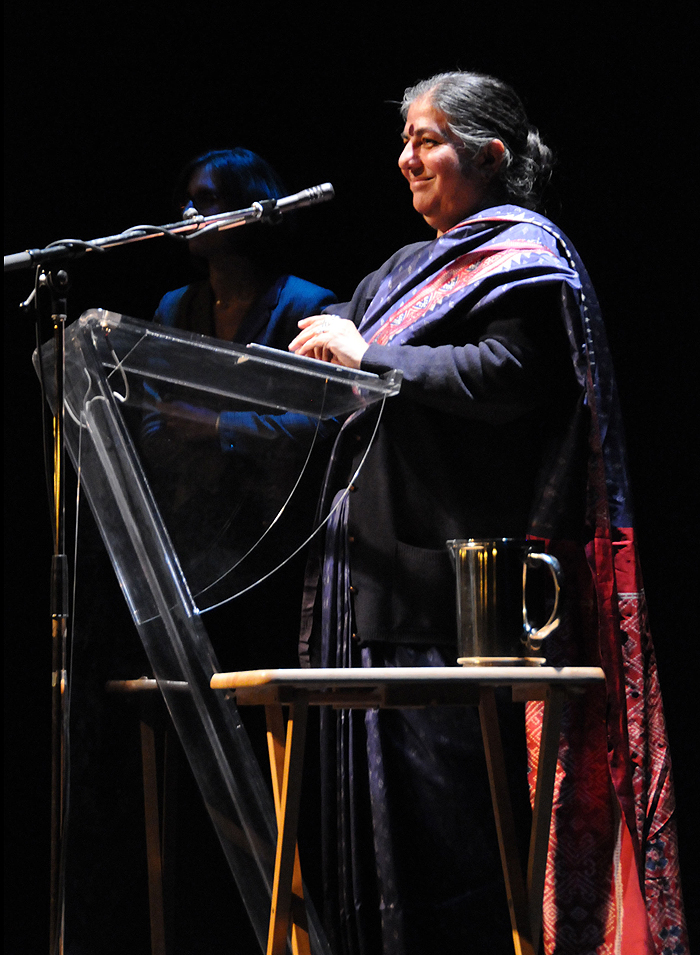 Do you ever think about where your food comes from, who produces it and how it is processed?
With an ever growing concern for better food quality, cost and distribution in todays society, there has never been a better time to question and challenge our current food system and to adopt more sustainable methods of food production.

During Hart Houses World Food Week from October 16 to 23, students and community members were invited to think critically about food and our relationship with it through a series of tastings, workshops, panel discussions and lectures.

The week began on World Food Day with Home is Where the Fork Is, a free tasting of local foods at the Wilson Hall Lounge at U of Ts New College. The tasting aimed to  encourage participants to try local food as well as to discover the benefits of being a locavore — one who eats locally grown foods.

The week proceeded with the screening of Fresh, a shocking and yet inspirational documentary by filmmaker Ana Sofia Joanes. In an intimate set up at Sammys — a small cafeteria at Hart House — audience members learned about the crude reality and disastrous consequences of industrial agriculture. Although depressing at times, Fresh also offered encouraging advice by food experts and motivational examples of farmers who are already changing the way they produce food.

Ive seen a lot of food security documentaries and I sometimes find they use a lot of scary tactics to shock and to get the message across. But, I found that [Fresh] had a positive message, said Ana Greisman, an audience member.

On October 20, Hungry for Change: What Toronto Eats, an impressive photo exhibit showing Toronto families surrounded by what they eat, was launched at Hart House. This exhibit runs until October 26 and can be seen hanging from the walls of hallways at Hart House.
The highlight of World Food Week was a keynote presentation about Earth Democracy delivered by world-renowned author, ecologist, physicist and activist Dr. Vandana Shiva.

Dr. Shivas scholarship and livelihood exemplifies what World Food Week is all about: living consciously to sustain and honour our earth’s resources, said Estelle Oliva, assistant director of Student Life and Leadership and the events organizer. We are thrilled to have her participate in this week-long awareness campaign.

Dr. Shiva gained recognition for her tremendous contribution to and support of environmental activism. A visionary, she is the founder of Navdanya, the Research Foundation for Science, Technology and Ecology. Navdanya was founded in India in 1987 and has since served as a network of seed keepers and organic producers in 16 states of the country.

Prior to her presentation at Hart House Theatre, Dr. Shiva met with a select group of U of T students, who have demonstrated leadership skills, taken initiative on campus and [demonstrated] a passion for sustainability and equity issues, said Oliva.

The event was organized as a Conversation Café, where small groups of approximately ten people sitting at round tables answered specific questions regarding food equality, agricultural sustainability and earth democracy. Each group had a facilitator who would rotate tables every ten minutes, taking their tables question along. Dr. Shiva was one of the facilitators, giving students the opportunity to engage in conversation with and learn from this distinguished guest.

During this intimate gathering, Dr. Shiva urged students to petition the government to subsidize healthy food, not the unhealthy. She insisted that respect be brought back to food, farmers and the Earth.

World Food Week ended with a lecture by UmKhonde Patrick Habamenshi, a member of the Toronto Food Policy Council and founder of Behind Dogon Doors, a Canadian social enterprise working to bring awareness to challenges faced by disadvantaged groups.

Those who missed World Food Week or those who simply didnt get enough of it are welcome to attend U of T’s Action 4 Food Justice — a free lunch provided by U of Ts famous Hot Yam. This event will take place at Hart Houses Music Room on October 27. Action 4 Food Justice is an opportunity for students and community members to come together and share their ideas on food issues.