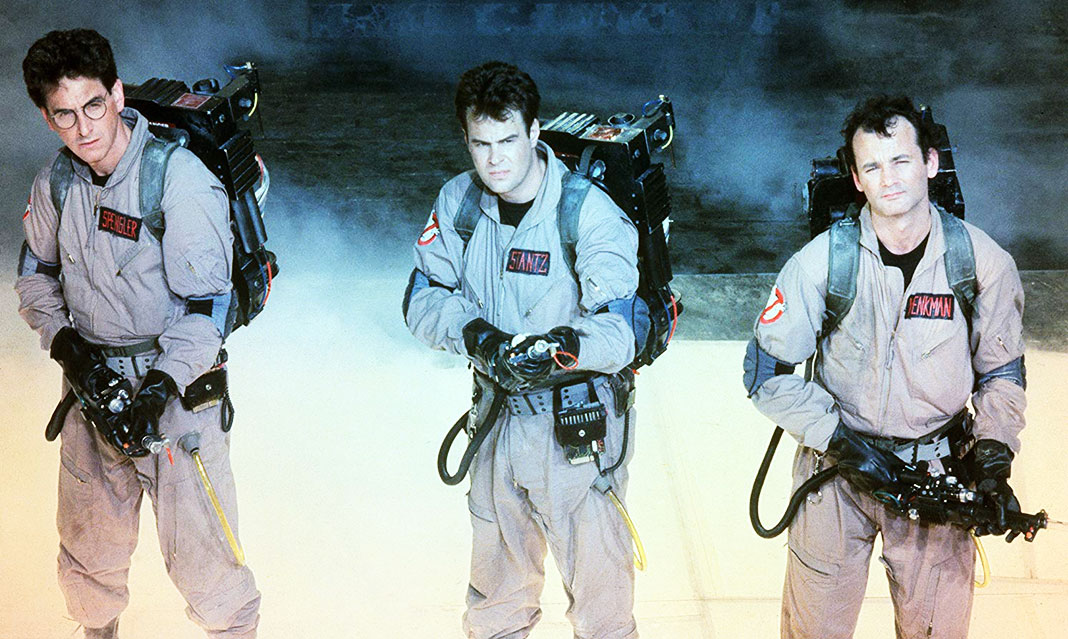 Ghostbusters is a 1984 paranormal comedy film directed by Ivan Reitman. When Peter Venkman (Bill Murray), Raymond Stantz (Dan Aykroyd), and Egon Spengler (Harold Ramis) are let go from Columbia University, where they work as parapsychologists, they decide to go into business for themselves, catching ghosts across New York City. Initially, the Ghostbusters have trouble drumming up business but after their first major success in catching a ghost in a Manhattan hotel, paranormal activity across the city starts to increase, and so does their business. In fact, their business is so successful, they have to hire Winston Zeddemore (Ernie Hudson) to help them out.

The Ghostbusters take New York City, capturing ghosts, poltergeists, and spirits, with their proton packs as their weapon of choice, but Egon warns them that crossing the streams could be catastrophic. Their operation appears to be going well until the Environmental Protection Agency shows up and demands that they shut down their containment unit since it’s unlicensed waste disposal. The Ghostbusters protest but the EPA flips the switch, causing an explosion that releases all the ghosts into the city.

All the ghosts wreak havoc across NYC but none are more dangerous than Zuul (The Gatekeeper) and Vinz (The Keymaster). The ghosts have possessed the bodies of Dana Barret, who Venkman has spent the majority of the movie hitting on, and Dana’s neighbour, accountant Louis Tully, who has also been hitting on Dana. Zuul and Vinz find each other and climb to the roof of the apartment building where they open an interdimensional gate, the same one that was earlier seen in Dana’s icebox, for the ancient god Gozer who threatens to destroy the city.

It seems like the Ghostbusters have their work cut out for them. Now they are the only ones who can save New York. In true comedy fashion, as the iconic theme song plays, they pull on their jumpsuits, strap on their proton packs and get ready for action. When they get to the gate on the rooftop, Gozer tells them to choose the form of the Destructor. Just when you think this movie can’t get any more ridiculous, the Destructor takes the form of the Stay Puft Marshmallow Man, who then proceeds to stomp all over the city, destroying it. The Ghostbusters realize the only way to stop the attack is to cross their streams, the one thing they were told never to do. But this time it all works out as the explosion causes the gate to close and Puft explodes in a mess of marshmallow goo.

This movie is a perfect blend of comedy, paranormal ghost stories, and ridiculous cheesy visual effects. Normally, horror films aren’t meant to make you laugh but this one sure does. The dry, expressionless humour from all the characters makes this a very funny movie. Clearly, the Ghostbusters take their job very seriously. This movie is good escapist entertainment for an hour and a half and has become a classic over the years, with good reason.