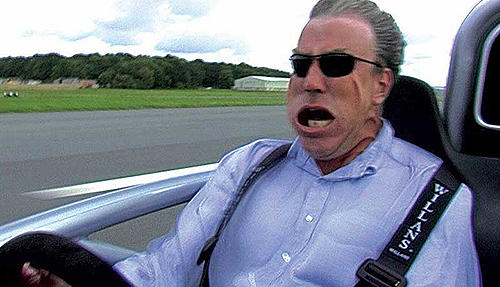 Automotive shows are boring. I’m not talking about the shows that take place at convention centres with lots of Asian import models and tricked-out rides. I’m talking about the kind that are shown on television, which are usually hosted by some middle-aged bore and offer meaningless advice to the everyday “consumer.” Over the years, most car shows have done nothing to change this perception. They figure that the more solid information, statistics and test drives they present, the better the show is. That’s clearly not the case. And some Brits have figured this out.

You may have seen the commercials, if you are lucky enough to have cable that shows BBC2 or BBC Canada at home. Exotic cars speeding along racetracks cut to clips of hatchbacks attacking a beach with the British Royal Marines. This is clearly not your average car show. This is Top Gear.

Yes, it has been around longer than most shows—since the late 1970’s. Yes, it was nearly cancelled in 2001 when ratings dipped. And yes, it is currently one of the most syndicated and popular shows in the world. But you haven’t heard of it. If you had, then you wouldn’t be reading this right now. You would be on Surf the Channel, trying to get past the MegaUpload restrictions on the 14th series’ opener—the one where they tour in an Aston Martin, Ferrari and Lamborghini across Romania, getting in trouble with gypsies and dignitaries alike.

Since its reinvention in 2002, Top Gear has become one of the most praised and innovative shows in the BBC lineup. The show’s production value is enormous—most notably the top-quality editing of the car footage. You will almost never see cars strolling along sideroads in an effort to distinguish their road capabilities. Instead, Top Gear comes up with challenges specifically designed to test what the car was made for. When they tested the Bugatti Veyron (the most expensive and fastest car on the road) they took it to a top secret German track in an effort to break the top speed record (over 250 mph). When they tested different cars for newly licensed 17 year-old boys, they determined insurance costs as well as how cool they would look in front of high school girls. This is not what you would normally see on a run-of-the-mill car show.

The presenters have a fantastic sense of humor. Led by Jeremy Clarkson, the Top Gear team has a bit of everything. Clarkson, the tall, overbearing leader, doesn’t accept anything of poor quality—people and cars alike. Richard Hammond, the smaller sidekick, has a penchant for flashiness, usually in the form of a Porsche 911, which is usually accredited to his mid-life crisis. James May, the “alternative” of the bunch, is usually the butt end of the cast’s jokes, mainly because of his safe driving (he is nicknamed Captain Slow by his peers) and his inability to follow directions. Rounding out the group is the Stig, their test track driver who, according to Clarkson, has a magnetic right hand.

This sense of humor invariably leads to fun and interesting car segments. One of their most well-known clips to date, Clarkson’s test of the Ford Fiesta, was in response to a letter the show received regarding how they don’t “properly” test “proper” cars. That is, cars that most people would actually be able to purchase. In an effort to appease the writer, the crew took the Fiesta through a series of regular tests, looking at its acceleration, braking, trunk space and color/fuel efficiency (yes, it is green—very). In addition to these normal tests, Clarkson also wanted to know how it would fare if being chased by a Corvette in a shopping mall. As it turns out, the Fiesta did quite well. Which makes me want to buy one.

What’s most notable about the show is their final opinion on the cars they test. You never hear about what specifications make the car worth its price (though it is mentioned during the tests), but the presenters make sure to let you know how the cars feel, which, as anyone who has every driven a vehicle knows, is the most important aspect. In their test of the Lexus LF-A, Hammond made it clear that the car was well-engineered in every shape and form, but at the end of the day, you’re still driving a Lexus, which is boring. This is the case with all the cars they test, from concept cars and custom drag racers to family sedans and two-seater hybrids. It’s not hard to be captivated when you feel like part of the action.