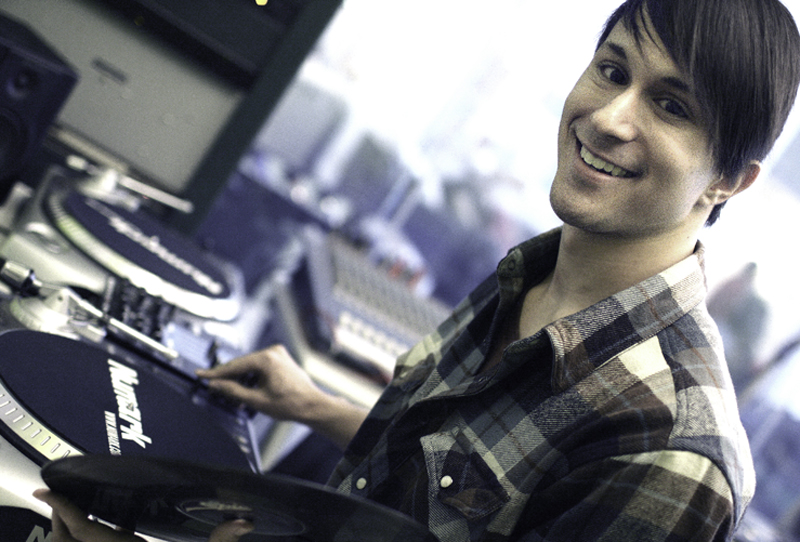 The Medium: How did you become a DJ and what was the process like?

Aristotle Eliopoulos: Well, to be perfectly honest, I didn’t even originally know about CFRE Radio.  I kind of knew we had a radio station on campus, but it wasn’t until Clubs Week when I saw their booth and they had some sample CDs out; I saw the buttons and the logo and everything sort of drew me to their table. They gave me an application form [and] I submitted it the next day. At that point Kenny, the programming director, just took my application and emailed me almost right away. We just set up a really brief interview to go over the guidelines of the station and to know what I can and can’t do as well as set up what time of day I would want to do my show. Also, I just had to shadow a couple of DJs during their own shows and attend a short technical session on how to work the equipment, but after that, everything was good to go.

TM: Cool. Does CFRE require any previous broadcasting experience in its DJs? What do they look for when selecting DJs?

AE: I don’t think so. They do ask for a résumé when you send in your application, but when you actually meet for an interview it doesn’t really seem like having past broadcasting experience would be necessary. I know I didn’t have any. I’m sure having that experience would definitely be a plus, but when they interview you, they just sort of, you know, see if you’re responsible enough to be in the booth and that you’re gonna take the effort to do your show every week for that one hour. It’s a commitment.

TM: Give us the scoop on your show.

AE: My show is called The Gamut and it’s on every Monday at 6 p.m. Basically, I play current alternative and independent pop music. I really like trying to find music and artists that incorporate elements of mainstream radio pop, but mix it up in small ways in order to make smart and innovate songs. It’s also just artists that I really enjoy. And I hope that when people listen, they will enjoy the songs and music as well.

TM: We definitely enjoy The Gamut. What kind of stuff do you do each week in preparation for your show?

AE: Before I even did the show, I always tried to keep up with independent music and artists. So I’d check music blogs, you know, Stereogum, Pitchfork, Hype Machine. I’d always try to find tracks that really grab my attention. Before I started doing The Gamut, I’d listen to these songs and be like “Oh! This is cool! I love this track,” and I would add it to my iPod. I actually take into consideration whether a certain song could work for the show and try to find out if it could work in an entire playlist. Because there are some songs that would be great for the show, but then I’m like “No, it doesn’t work with any of the other songs I’m playing, so forget it,” and then sometimes I get a great fluke when two songs I really love just blend together perfectly. It’s always just keeping an ear out for independent music you think could really work in a radio setting.

Also, you know, coming up with dialogue or content between the music. I personally do “Tweets of the Week” and I try to find artists online that are saying interesting things. It’s sort of the idea that while you’re giving listeners music that they can enjoy, you’re also giving them some sort of background information about the artist. Also, I try to think of ways to interact with the audience. It’s hard to do that when you can’t see or hear them in any way. but you have to be aware that they’re there, even if you sometimes feel you’re just yelling into the void [laughs].

TM: How do you decide which songs go on your playlist or which themes you choose to do weekly?

AE: Well, when I say “theme”, it’s a pretty loose idea. Like, I’m not saying all these songs are gonna be about heartache or . . .  zebras? [laughs], but when you listen to an album or even just an EP, you can kind of feel when a group of songs all relate to each other on a basic level, even when they might not be stylistically the same. So when I am making the playlist, I’m always changing and revising the songs I want to play until the show actually happens on Monday. Sometimes it’s guesswork, like “That works, oh that doesn’t work, let me remove that, oh I don’t know about that.” There’s no real system for creating a perfect set of songs, so you can only hope that it flows together and listeners don’t feel jolted by a sudden change in style. Really, I’m not even sure people listening notice little stuff like that, but to me, subtle details are important.

TM: What is a typical evening in the DJ booth like? What do you do between songs, while you’re waiting to go back on the air?

AE: Well, while I already listen to my playlist before the show when I create it, it’s sort of different to hear the music when you are in the DJ booth. I’m always reflecting on the show as it’s happening and thinking, “Maybe that song didn’t blend as well as it could have” or “Ooh, I really like that! I didn’t notice that before!” But at the same time I’m trying to do small publicity, so on The Gamut’s Facebook page I usually post that the show is happening really soon, or even is happening right now. Also, you want to make sure you’re filling out your CFRE Radio form, which basically is just a record of the songs you’re playing, and the PSAs you’re playing, and the Canadian artists you’re playing [laughs]. It’s nothing majorly complex when you’re in there. It’s all about just knowing your cues. You know, “Okay, I said I would speak at this point, I’m gonna turn up the microphone now”. Oh, which is done through the dashboard right there [points]. Knowing how to use that is a pretty big deal, but it really looks more complicated than it actually is. You’re just controlling your microphone, the CD outputs, and the volume of your music.

We also have the “Black Box” [points to a wooden case full of CDs]. That’s all the new music the station really likes you to play. It’s updated every so often, so when I see what’s in it I think, “This is cool, maybe I should play this band for my next show.” Also because they’re physical CDs, you see the album art that you don’t really see anymore because everything is in digital format. Even though iTunes provides you with a computer copy of that stuff, it’s never as cool as holding it in your actual hands. So I love looking at that when I’m in here, and yeah, sort of just getting ideas by soaking up the aura of the booth for inspiration.

TM: Good to know, since lots of people tend to worry about what is actually involved and what you’re required to do on air.

AE: Oh yeah, it’s honestly not too difficult. They totally ease you into the whole thing. Like I said, it’s about having a basic level of responsibility, and an eagerness to learn this small stuff so when your first show actually happens, you don’t end up talking into a turned off microphone for an hour. Everyone at the station is really understanding, because they know this is a major form of public speaking, so you’re bound to be a little nervous at first.

TM: That’s totally understandable. Switching gears a bit now, if you could co-host your show with any musician, who would it be?

AE: Ooh, a fun question! Right now I’m really into Wavves and Best Coast, so Bethany Constantino or Nathan Williams. They have some pretty good tweets, and they always seem really down to earth and cool, and they’d probably just be like, “Let’s play some Blink-182 and Punk-O-Rama!” But yeah, they would seem really fun to hang out with for an hour.  Also, maybe the band jj, but then they would probably be like “Let’s play some T.I. and Taio Cruz” and I would have to say “Uhh, I don’t think I can do that…” Although if I’m having a special guest like that, I guess I could do that for them. But yeah, really when you’re doing a show with somebody, it feels more like a conversation. You’re just hanging out or chatting, you know, shooting the breeze!

TM: Good choices. Could you give our readers some final words of wisdom? What could they do if they want to pursue a career in broadcasting or just become a DJ like you?

AE: If you are interested in broadcasting, CFRE is a great place to get some practical experience. Working at CFRE is great because I like the idea that if you’re a creative person you can sort of express yourself. They really give you that kind of creative control by allowing you to have your own hour show. Also, it sort of allows you to have a kind of soap box where you can just present what you find interesting in the world, whether it’s music related or another topic. There are a lot of people that do great non-related music programming on the station too. There are two guys that do a show on nerd culture, another duo that talks about new age spirituality; there is really no limit to what your show could be about.

TM: Very true. Last question. Do you have any “guilty pleasure” music you love to listen to, but wouldn’t dare play on the show?

AE: Well, as strange as it may sound, even though CFRE is a radio station that devotes itself to independent music, I love listening to mainstream radio too.

TM: Really? What’s a song that makes you happy when it comes on the radio?

AE: “Bottoms Up” by Trey Songz! No question! Anything by Nicki Minaj, or Rihanna [laughs]. You know the show Friends?

AE: Okay, right now I’m thinking of that episode where Joey has to do an interview for Days of Our Lives, and he does the whole interview really well, until the interviewer asks him what his favourite soap opera is at the very end, and he says “I don’t watch soap operas! I have a life!” and ruins the entire thing. I hope this question doesn’t have a similar consequence.

TM: Do you really think it might do that?

TM: Should we stop here?

Aristotle is a third-year English student who encourages you to become a DJ at CFRE Radio. Check out The Gamut on Facebook

(facebook.com/cfre.gamut) for each week’s playlist and visit cfreradio.com for a list of other programs and details on how to apply for your own show.