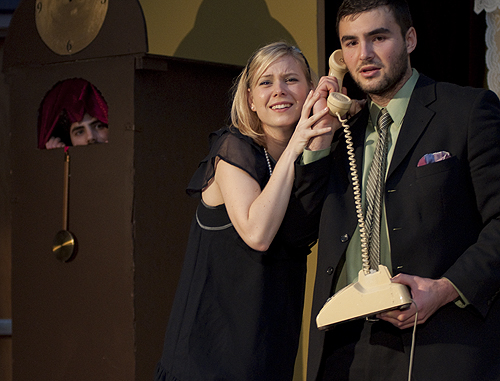 If a burglar asks you for a drink upon being discovered, chances are he’s not as dangerous as you think. Led by professors Salvatore Bancheri and Guido Pugliese, the Italian theatre troupe Le Maschere Duemondi dell’Università di Toronto a Mississauga (The Two-World Players of UTM) staged a production of Dario Fo’s comedy of errors, Non tutti i ladri vengono per nuocere (The Good that a Burglar Can Bring) this past weekend.

The production was met with peals of laughter from a responsive audience.
Performed entirely in Italian, the 1957 play tells the story of a burglar (Luca Mazzulla) who breaks into the house of a wealthy man (Peter Filice), only to be interrupted by a phone call from his wife (Maria Coscarelli). Before he can leave, the burglar is forced to hide in a grandfather clock when the wealthy man and his mistress (Karolina Frasunkiewicz) return unexpectedly to the house. The burglar’s wife calls and the owner of the house answers, thus creating a whirlwind of confused identities, as the man’s wife (Adwoa Asare) returns home as well, soon followed by her own secret lover (Adam Cresswell). Everyone is so concerned about concealing their own identities to keep their significant other from finding out about their frivolous affairs, all the while generating hilariously clueless conversations. One such example is when the man’s wife comes home and the man introduces the burglar as the husband of his mistress in order to conceal her identity.
Though most of the play’s actors and actresses are not drama students, this was hardly detectable. They made the play  incredibly entertaining from start to finish. Mazzulla’s entrance to the theme of Pink Panther established the fact that laughs were sure to follow, and his reactions to the ridiculous situations his character end up in were both extremely comedic and yet very natural. If Mazzulla’s emphatic Italian gestures and demeanour were to be matched in any way, it would be by Coscarelli’s performance as his prying, controlling and neurotic wife. She conveyed the stereotypical overbearing wife well, and though her character and that of her burglar husband spent more time arguing than anything else, the chemistry between Mazzulla and Coscarelli was evident as they effortlessly portrayed a typically dysfunctional marriage.
Filice’s role as the owner of the house was the most challenging as he had a significant amount of text to deliver. On the whole, he did quite well in his portrayal. One of his most memorable and entertaining scenes was the fumbling and constant misplacement of the gun. He pointed the gun at the burglar at one instance, only to have the burglar gain possession and point the barrel up his nostril instead. Both Frasunkiewicz and Asare were endearing despite their roles as adulteresses, and Cresswell’s depiction of the French Italian Antoine/Antonio was yet another comically infused performance, as he transitioned in and out of a hilarious combination of both languages.
Though Cresswell is the only member of the drama program, he, Frasunkiewicz and Asare are not native speakers of Italian. They should be commended for their great performances. Matthew Lima was responsible for the play’s scenography but also made a special appearance as the second burglar at the end of the play. When Lima began singing and humming the Pink Panther tune, his efforts were enthusiastically echoed by the audience.
In addition to the play’s hilarity, some amusement came from an elderly Italian woman in the audience, who enjoyed adding a bit of her own commentary to the interactions between characters. The slapstick antics of the cast were enjoyed by all. Even those who are not familiar with the Italian language will likely find themselves laughing at all the right moments.
Two more performances, taking place in room 137 in the Kaneff Centre, remain for the weekend of March 6 to 7. Contact Belinda Grayburn at 905-569-4321 for tickets and further information.