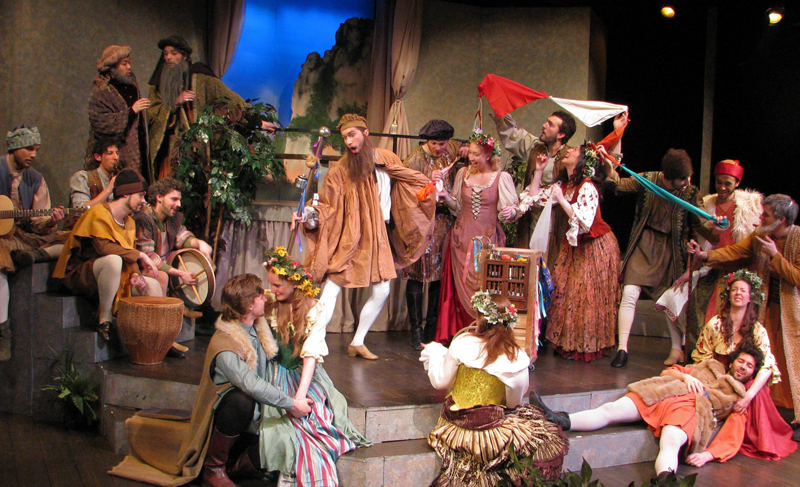 As the school year comes to an end, so does another season of student theatre on campus. Theatre Erindale’s 2010/11 “Coming of Age” season wrapped up last weekend with a performance of Shakespeare’s The Winter’s Tale under the experienced direction of Mimi Mekler.

The plot focusses on Leontes, King of Sicilia (Paolo Santalucia), who becomes fixated on the idea that his wife Hermione (Hannah Drew) is having an affair with Polixenes, King of Bohemia (Philip Stonhouse). His paranoia drives him to extreme measures and he orders Camillo (Matthew Gin) to murder Polixenes, but Camillo instead warns Polixenes of the vendetta against him, and the two flee Sicilia for Bohemia. Meanwhile, Leontes has Hermione arrested and put on trial for her supposed adultery, and while in jail she gives birth to a baby girl whom Leontes believes to be the bastard child of Hermione and Polixenes.

In order to settle the rumours flying around, two lords, Cleomenes (Eitan Shalmon) and Dion (Julio Ospina), seek the word of the god Apollo for the final verdict. Apollo confirms Hermione’s innocence and that the child is indeed the daughter of Leontes, but he defies the oracle and convinces himself it is all untrue. In his crazed state, Leontes attempts to kill the child, but upon much pleading from fellow counsellors like Antigonus (Adam Cresswell) and his wife Paulina (Kristen Zaza), he declares that the child be abandoned in the mountains instead. Hermione tries to reason with Leontes in a very moving speech, but he simply shuns her and everyone is led to believe that she dies in prison.

Antigonus flees with the child to the shores of Bohemia, but he is soon ambushed by ferocious bears and must leave the child hidden, as he is ultimately attacked and killed. The morose and sinister mood then shifts quite drastically as the action moves to the lands of Bohemia, inhabited by happy-go-lucky shepherds and shepherdesses. One such old shepherd (Cameron Laurie) stumbles upon the child and raises her as his own, alongside his clown of a son (Jake Maric). Great dramatic irony ensues as Perdita (Alison Blair), the long-lost princess of Sicilia, lives a rural life among the Bohemians, and many characters of the past return to put the pieces together in an attempt to unite the two kingdoms. In an otherwise fairly predictable plot, the unexpected, supernatural twist at the end allowed a number of actors and actresses to showcase the full range of their talents.

The play began on a somewhat static note, as much of the action was on a more psychological level that required the audience to follow Leontes’ frazzled thought processes. Paolo Santalucia gave a very strong performance as a king tormented by jealousy and paranoia, and he greatly charted the deterioration of Leontes as he loses both his wife and son, but redeems himself by embracing the daughter he cast off so long ago. Hannah Drew’s portrayal of the emotionally abused Hermione was particularly compelling, as she perfectly conveyed the heartbreak Hermione feels as a result of her husband’s unfounded persecution. Alison Blair gave a quaint performance as the couple’s young son, Mamillius, but she stood out to a greater degree as Perdita, whose royal heritage is unknown to her for countless years. Adam Cresswell and Kristen Zaza both put a lot of emotion into their characters, with whom the audience was able to connect, while Matthew Gin greatly conveyed the scheming yet heartfelt nature of Camillo, who ends up helping out and plotting against the same people at various points in the play. Philip Stonhouse was equally enjoyable as the King of Bohemia, and he worked well to convey the centrality of his character to both plots.

However, the three standout performances belonged to Cameron Laurie, Jake Maric, and Andrew Soutter, whose jovial characters managed to invoke a new energy into the second half of the play. Laurie’s charisma emerged in his portrayal of the old shepherd and he had a great dynamic with Jake Maric, who played his oblivious and excitable clown of a son. Maric’s performance was incredibly refreshing, and it was evident that he was greatly enjoying himself onstage. Soutter gave another endearing performance as the charming pickpocket, and together with Maric, they provided the greatest source of laughter throughout the entire second half. Despite the somewhat less exciting Sicilian plotline, all of the actors and actresses played their parts exceptionally well.The shift to Bohemia allowed for some entertaining music by Christopher Dawes and John Dowland, great choreography in Sarah Jane Burton’s folk-ish dance sequences, and beautiful costume design by Joanne Massingham.

Although The Winter’s Tale is not one of Shakespeare’s most popular plays—in fact, it pales in comparison to Othello, as Leontes’ self-fashioned paranoia is much less captivating than Iago’s sly hell-raising—the true highlight was the strength of the entire ensemble’s performance. The great talent of the third-year cast was apparent throughout the entire season, and although the graduating students have graced the Theatre Erindale stage for their final time, there is no doubt that their flair for the stage will take them even farther in years to come. Under the dedicated guidance of Theatre Erindale and the drama program faculty members, these actors and actresses were able to “come of age” both onstage and off.