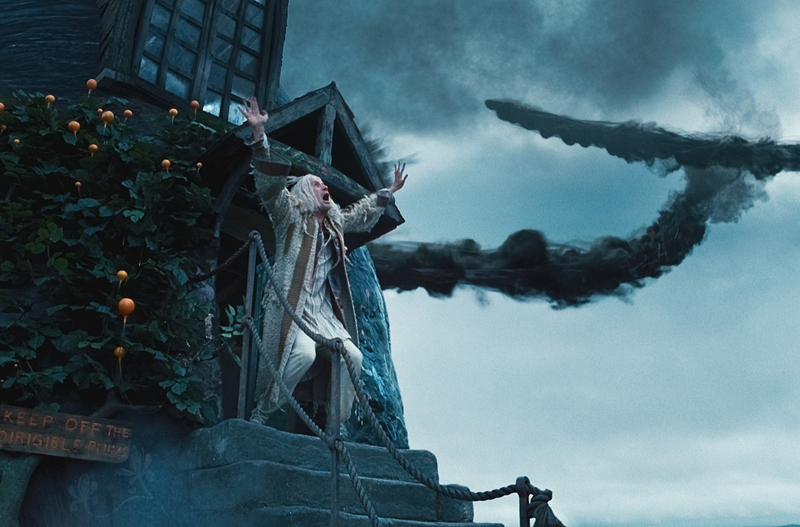 At 9:45 p.m. on Thursday, November 18 at Coliseum Mississauga, the long-awaited Harry Potter finale was just hours away. But until then, mobs of teens, young adults, and the odd parent or two waited in muddled lines outside the closed doors of the auditoriums. Some sat on the carpet clutching their care-worn copies of Harry Potter and the Deathly Hallows, as they tried to refresh their memory before the movie; others stood and compared their choice of costume—Hogwarts uniforms versus Quidditch robes.

The conversations hummed as friends held places in line and texted latecomers about their whereabouts, while overwhelmed staff members attempted to herd everyone in an organized, linear fashion.

Finally, with an hour and a half until midnight, the doors opened and it was a chaotic race into the theatre. Even the Hufflepuffs knew this was not the time to be nice, as grabbing a good seat in the fast-filling theatre was about as difficult as capturing the Golden Snitch! Eventually the eager fans all found seats, grateful to be waiting out the clock in comfort.

Nevertheless, sitting in a teeming theatre for over an hour with a blank screen taunting you is not a task any witch or wizard would gladly undertake. Time was largely spent chatting about expectations of the movie: Will it live up to the book? What parts will they cut out? How will part one end?

While we would all find out the answers quite soon, it was evident that the excitement was growing. Snacking was a popular distraction as Bertie Bott’s Every Flavour Beans were passed along one row, and a Gryffindor and two Slytherins shared a small mountain of nachos with another—clearly this is a rare occasion in which house rivalry was not in effect. In fact, despite the agonizing wait and surprising lack of fans dressed in costume, spirits seemed rather high. Perhaps this is because most of the fans have grown up with “The Boy Who Lived”, maturing along with the characters and content of the books. “Reading or watching Harry and his pals is like catching up with old friends,” remarked one UTM student dressed in Gryffindor garb.

As we neared the reunion with our wizard friends at midnight, a general restlessness spread throughout the theatre. Finally, at precisely one minute after 12, the lights dimmed, the audience cheered, and then…previews!

But soon after that, Harry Potter and the Deathly Hallows: Part One officially began, and the room vibrated with anticipation. The camera began its traditional flight through the clouds in the same fashion as all six previous films. Applause and cheers soon died away and the entire auditorium fell into an eerie silence to watch the beginning of the end.

As the Harry Potter films have progressed, it is fairly obvious that the danger and tension have as well.

Part one of the seventh movie in the series continues on this dark and treacherous path. The film opens with farewells, as the three main characters have accepted that no place is safe anymore. Harry Potter (Daniel Radcliffe) must embark on the overwhelming quest of finding and destroying the remaining

Horcruxes so that “He-Who-Must-Not-Be-Named” can finally be killed. Helped by his two BFFs, Hermione Granger (Emma Watson) and Ron Weasley (Rupert Grint), “The Boy Who Lived” undertakes his most difficult and dangerous challenge yet.

What director David Yates is attempting to portray is a wizarding world without the innocence and whimsy of past movies. He has gradually achieved this with The Order of the Phoenix and The Half-Blood Prince, but it is in Deathly Hallows that the real threat is fully revealed. There is no more Hogwarts for Harry, Ron, and Hermione. No parents. No Dumbledore. The three heroes are completely on their own, a concept which allows us to see how their friendship has truly grown over the past 10 years. We see how everything has changed for them; their feuds become more intense, their goals more important, and their maturity more evident.

The three young actors have certainly matured along with their characters and are very impressive in the movie’s many intense, dramatic scenes. Radcliffe, Grint, and Watson are now so familiar with the characters and what is at stake that they vividly convey their characters’ inner turmoil while being hunted by the Ministry, Death Eaters, and the Dark Lord himself. Scenes involving the villains are nothing short of sinister as Voldemort (Ralph Fiennes) sends shivers down everyone’s spine with every threatening hiss. Deathly Hallows is certainly the darkest instalment yet and, due to some shockingly graphic scenes, is definitely not recommended for children.

That being said, don’t think that HP7 is a total drama or downer. The audience is never too short of laughs thanks to Ron, the Weasley twins, and some unsuspecting Ministry of Magic employees. This movie also marks the triumphant return of Dobby, the plucky little house elf who was greeted with major applause at his first appearance. There are a number of other old acquaintances who make nostalgic appearances; some are happy reunions, while others are difficult to speak of without getting slightly misty-eyed.

There was no shortage of laughter or tears throughout the quick-paced movie, and even if you haven’t grown up with the books and films, it’s easy to see why loyal fans tough out the long wait.

If you still haven’t seen Deathly Hallows yet—Merlin’s beard!, what are you waiting for? Let your inner wizard out and go see the beginning of the end of this epic, decade-spanning saga!