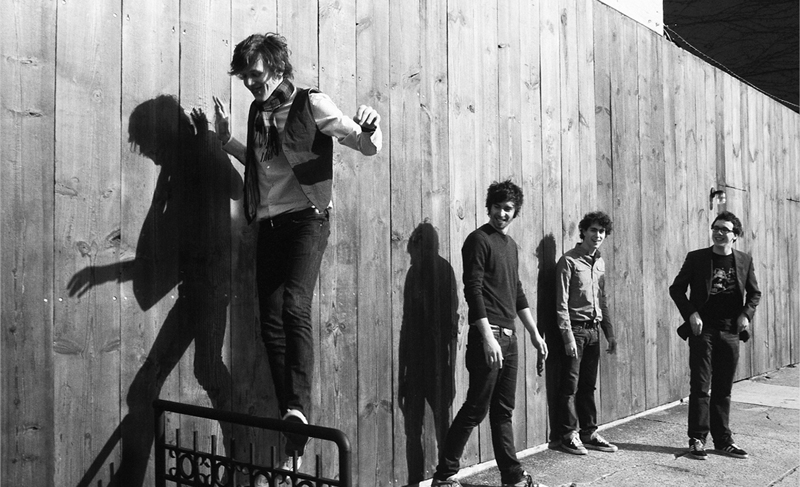 The stage was set as the youth piled into the warmth and dimness of the Kool Haus last Saturday night.

The Two Door Cinema Club logo was set at the back with two round cat eyes relentlessly staring at the crowd. They eyes stared still as the bodies shuffled around with anticipation. Placed precisely in the centre was nothing but a drum set and a microphone stand—a simple set for a simple band that call themselves PS I Love You.

Finally, two figures came on stage unannounced and nonchalantly. One prepared himself with a beer at the drum set as the other, with a guitar in hand, adjusted the mic stand. It seemed like not many knew who these guys were; nevertheless, everybody wanted to hear some music. The two turned out to be a noise-pop band from Kingston, Ontario. Right off the bat, PS I Love You surprised the crowd with their roaring sound. The music was fabulously guitar-based with the front man clearly having some serious talent on the instrument. Vocally, the lyrics seemed typical for a garage-band sound and were limited with screams and vulgarism. The relatively good music was the main attraction, due to the fact that some people were not too thrilled with the vocals. The duo played songs from their LP, starting the night with “Meet Me at the Muster Station”, which speaks about anger and frustration towards the social world being dependant on technology more than ever. Another memorable tune, entitled “2012”, unavoidably caught everyone’s attention. It was clear to see that the crowd accepted the band with open minds, but they were still getting restless as they eagerly awaited the two sets of “Clubs” to hit the stage.

The next band had a very warm welcome from the mob of indie rockers that filled the crowd. Two Door Cinema Club, originally from Ireland, finally took the stage with the upbeat electric music everyone was waiting for. The band began with “Cigarettes in the Theatre”, which was the perfect first tune to get everybody pumped up for the next few hours. The lead vocalist, Alex Trimble, sounded amazing live, and very similar to the record itself. The vocals sounded almost flawless among the rush of guitars, drums, and synth. The literal jumping and dancing on the stage by Trimble and bassist Kevin Baird infused a lively atmosphere throughout the venue. In the middle of the set, Two Door performed a couple of their more recent songs, including “Handshake” and “Kids”. Two Door struck the crowd with thrilling indie rock that essentially left people wanting more or asking where they could get more. As the set ended, the energy emitted from the stage invigorated the crowd. The whole performance of songs spat dashing melodies and did not leave a single person leaning against the wall.

The final intermission passed and the stage crew prepared for the much-anticipated headlining band.

Just like the opening act, Tokyo Police Club is made up entirely of Canadians, specifically from Newmarket, Ontario. As the red lights dimmed the stage, the band appeared and began the instrumental intro to “Favourite Colour”. The crowd could not help but applaud when Dave Monk’s voice was heard and the bright lights finally revealed the faces of Tokyo Police Club. The songs from their second album, Champion, were a delight to watch and hear, and heads were peeking over heads in an attempt not to miss a sight or a sound. When hits such as “Wait Up (Boots of Danger)” and “Bambi” were performed, the lyrics had an echo as the crowd sang along to every line they knew. The overall musical performance was vigorously entertaining, and was definitely worth the long wait. Tokyo Police Club saved an old song for last, when they performed “Your English Is Good”, off their debut album. The song marked the beginning of the indie rock band’s fame in 2008, and was now the closing performance of the show.

Things couldn’t have gotten any better—but surprisingly, they did. For a final encore, Two Door Cinema Club returned onstage to join Tokyo Police Club for a cover of “Last Night” by The Strokes, as both front men took turns singing the verses and chorus. It was a memorable way to end the show with such a famous tune, and the final words that Monk shared with fans were simply, “Thanks, Toronto. We’ll see you soon.” Yet again, all that was left was an empty stage and a crowd with the feeling of anticipation for “soon”.