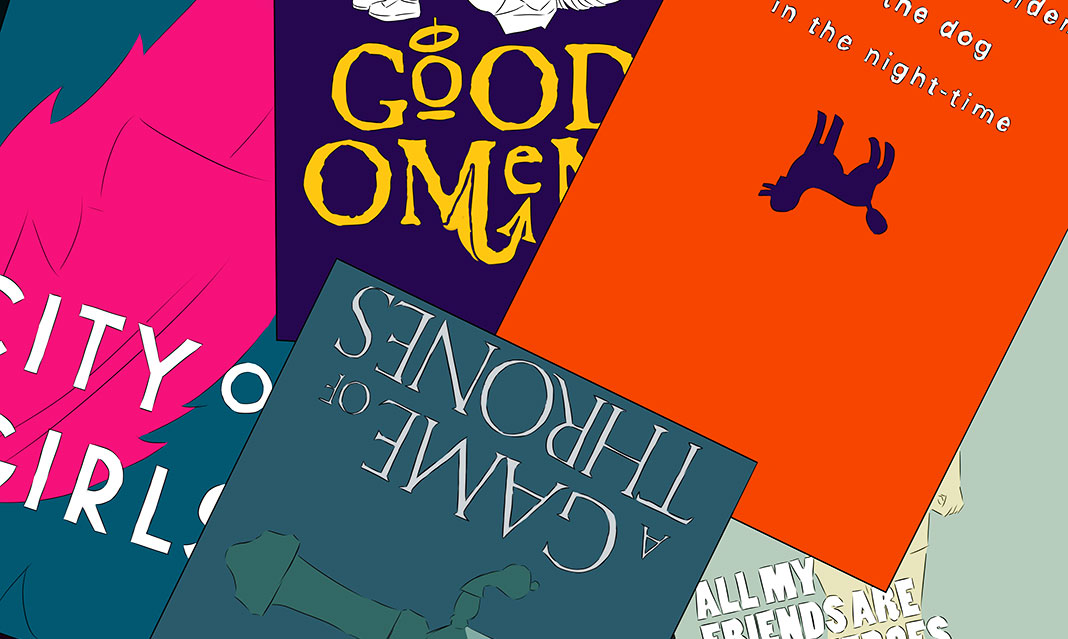 Are you someone who never has time to read for pleasure, but now has infinite pandemic time? This is the list for you!

Two weeks (or more) can feel like a very long time if you’re stuck inside social distancing with not much to do other than watch Netflix and the news. If you’re bored of that, there are also books to read! So, turn off your screen for a little while—here are some books to add to your list.

City of Girls by Elizabeth Gilbert

Head back in time to 1940s New York City. A time of boozing, nightclubbing, sex, and adventure. The book follows 19-year-old Vivian as she moves to NYC to live with her aunt after dropping out of college. Here she joins her aunt’s theatre company and makes friends with showgirls. The girls go out on wild adventures in the city every night, celebrating Vivian’s newfound freedom and making men fall in love with them. After one personal mistake that leads to a scandal, Vivian’s world turns upside down. But that mistake is what leads Vivian to the love of her life and helps her understand what kind of life she wants to live.

Christopher Boone knows all the countries and their capitals, he excels in math, he hates the colour yellow, and he finds people confusing. One night, when the neighbour’s dog Wellington turns up dead, Christopher sets out to solve who murdered him, Sherlock Holmes style, completely logically. When looking for clues about Wellington, Christopher finds letters addressed to him—from his dead mother. Christopher values the truth above everything so now he has two mysteries on his hands to solve. It’s a book about family, being yourself, and overcoming difficult situations. It’s funny and heartfelt at the same time.

A Game of Thrones by George R.R. Martin

If you’re a fan of the Game of Thrones TV show and you’re going through withdrawal since the series ended last year, maybe you should read the books. The books take you on an epic fantasy adventure through the land of Westeros. We get to know the great families whom fight to take the Iron Throne. Each chapter is told from a different character’s point of view so we really see what’s going on from all angles. All the characters are part of the bigger story, but they also have their own individual stories. There’s love, battles, betrayal, friendship, survival, feminism, and everything else you could possibly want in a book. There are also five books of about 700 pages each so that should keep you occupied for a while.

All My Friends Are Superheroes by Andrew Kaufman

This short, quirky book is about normal people with superpowers. There’s The Ear, The Spooner, and The Impossible Man. At Tom’s wedding, where he also married a superhero, The Perfectionist, Hypno (the ex-boyfriend) hypnotized The Perfectionist into believing that Tom is invisible. Convinced that Tom abandoned her, The Perfectionist decides to move to Vancouver and leave Tom and her broken heart in Toronto. But being invisible has its advantages. Without her knowing, Tom boards the plane and sits next to her. Now Tom has the five hour flight from Toronto to Vancouver to convince his wife that he is visible.

This is a highly entertaining end of the world book. Heaven and Hell are preparing for Armageddon. Angel Aziraphale and demon Crowley have been living on Earth since the beginning and they have become sort of frenemies. It turns out they actually don’t mind Earth, and don’t want all life to come to an end. The Four Horsemen are ready to go and bring about The End, but they need the Antichrist to officially set things in motion. Moreover, there’s been a mix up and no one knows where the Antichrist is. Good Omens was also adapted into a miniseries on Amazon Prime Video if you want to watch that once you’re done the book.

How We Fight For Our Lives by Saeed Jones

Saeed Jones’ memoir tells the story of a black, gay man from Tennessee as he tries to find his place within his family and within America. The book highlights prominent homophobia, racism, and other forms of discrimination in America and how Jones dealt with these issues as he moved across country at different points in his life. The book is beautiful and reads like poetry. It’s a book about strength, perseverance, and hope.

This book might be a memoir, but it reads like a fiction novel and goes to show that sometimes truth is stranger than fiction. Tara Westover was born and raised in a big Mormon family in the hills of Idaho. She worked in her father’s junkyard, salvaging metal scraps and helped her mother stew herbs. Tara went to school for the first time when she was seventeen. She educated herself, learning enough math and writing, to get her into Brigham Young University and later Cambridge. Westover’s story is a battle between family loyalty and doing what’s best for herself.

When a giant ten-foot tall Transformer-like sculpture appears in the middle of New York City, 23-year-old April May and her friend Andy make a video with it. They call it Carl. The next morning, they discover this video has gone viral. Not only that but there are now reports that there are Carls in cities all over the world from Los Angeles to Beijing. April May finds herself in the middle of an intense, international media frenzy over what the Carls are doing here and what they want.