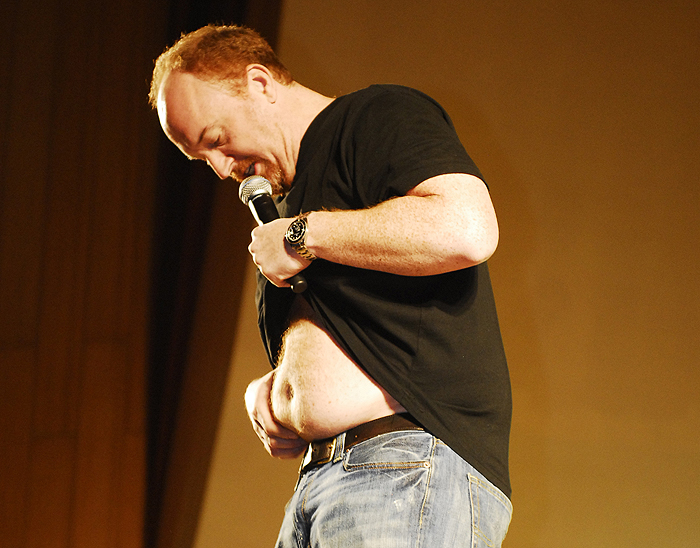 I was in New York three years ago and I tried to see a The Whitest Kids You Know show at Carolines comedy club. At that point TWKYK were developing a show for the Spike network and would not be seen that night. Instead, they were replaced by a headlining act Id never heard of. His name was Louis C.K. On came this middle-aged bald guy, who described himself as a fat faggot and contemplated the tangibility of literally sucking a bag of dicks. I fell for him right away. My accidental patronage turned me into a longtime fanboy.

The only comedian Ive seen control a room in the same way as Louis is Dave Chapelle. Hes the same sort of fearless storyteller. C.K. offers his opinion without apology and audiences accept it without blame. Its a discipline cultivated over decades of live performance, and the effect is phenomenal. It is mind boggling to watch him get away with the most salacious, offensive, terrible shit while actively telling his audience to fuck off, and come out smelling like roses.

He despises anything that doesnt immediately benefit him and he makes no illusion of it. He admits to fantasizing about punting his baby or wishing ill on strangers for no reason. He had a bit that involved shouting N****r baby! more than once, while experimenting with the inflecting and thereby contemplating the meaning of the phrase. Meanwhile, the entirety of the sold out Winter Garden Theatre giggled their asses off. He delivers his jokes with a self-deprecating Boston charm and, outside of it being hilarious, youre really left with the feeling that he is, in fact, a good guy. I think C.K. is probably the best standup going right now.

Louis has been professionally writing comedy since the early nineties for the likes of David Letterman, SNL, Conan OBrian and Chris Rock. He has since collaborated with Rock to bring forth comedy classics like Pootie Tang which he wrote and I Think I Love my Wife which he co-wrote with Rock. After two decades on the standup circuit and writing other peoples jokes, C.K. has just recently has he found himself in the prime time spotlight. He can be seen on NBCs Parks and Recreation and Ricky Gervais new comedy feature, The Invention of Lying. A recent appearance on Conan OBrian where C.K. champions an age of incredible innovation while chastising a generation of lazy ingrates exploded on YouTube. If you havent seen it yet, I really recommend it. Just google it, you lazy ingrate.

This tour will give way to his third Tour DVD, Louis C.K.: Hilarious. The last two, Shameless and Chewed Up can be purchased on his website, louisck.net or stolen off the internet. I guarantee if you do youtube him, be prepared to spend at least a half hour going through his stuff. Its good. Go.