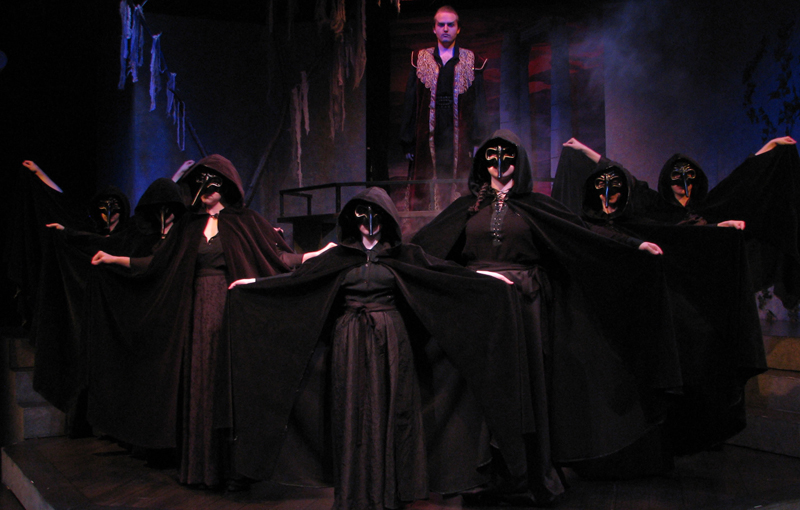 “Double, double toil and trouble; fire burn, and cauldron bubble!” the veiled hags famously chant in the opening moments of Witches and Bitches, Theatre Erindale’s latest production. Directed by Kelly Straughan and both compiled and adapted by Patrick Young, the play features an assemblage of the most menacing female antagonists from Tudor-Stuart drama. The work is inspired primarily by Thomas Middleton’s The Witch, Shakespeare’s Titus Andronicus and Macbeth (which Middleton revised to include scenes of Hecate and the Three Witches as they originally appeared in The Witch, and it’s this version which has risen to popularity), John Webster’s The White Devil, the Jacobean tragedy The Witch of Edmonton by William Rowley, Thomas Dekker, and John Ford, and finally, Middleton and Dekker’s The Roaring Girl.

Although it’s an intriguing concept that was worth exploring, the combined plots just didn’t translate effectively as a collective performance. Most of the situations are without much context, so for those who are unfamiliar with Shakespearean, Middletonian, and Jacobean drama, it’s hard to see exactly what each woman’s motive is in carrying out her sinister deeds. Although each role was carefully compiled to showcase each villainess at her most wicked, without more of the original play to serve as a backdrop for the women’s behaviours, the performances become even further isolated from the assembled plot. The greatest sense of cohesion comes at the end, when each woman discovers that the evil Shaitan (Julian Munds), the demon leader of the witches’ coven, has had a hand in foiling each of their schemes.

Nevertheless, each female role was acted with great conviction, passion, and villainy, which greatly enhanced the overall performance. In addition to playing the great female villains like Lady Macbeth (Stacey Arseneau), Tamora, Queen of the Goths (Hallie Seline), Mother Sawyer (Tiffany Feler), Beatrice-Joanna (Tasha Potter), Livia (Stacey Gawrylash), Vittoria Corombona (Kathryn Alexandre), and Moll Cutpurse (Nora Williams), each actress also took on a number of other roles as they all appeared in each other’s tales. Furthermore, these smaller roles were mostly male, and although less convincing, the actresses were able to convey relationships in which the men are subordinated into weaker positions at the hands of the powerful women who are really running the show. The play swiftly transitions between plots, yet there is always a return to the main scene of conjuring and chanting, with Shaitan loosely in the role of Hecate.

Munds’ performance, as the sole male actor, showed the potential to convincingly portray the devil in his various guises, but he lacked his usual stage charisma and at times looked rather uncomfortable in these roles. He was able to captivate the audience with his ominous speech and really come alive on a few occasions; however, he appeared not fully invested in some of the characters he was trying to embody.

The effort the cast put in was evident from the beginning, but despite the mostly passionate performances, these emotions didn’t engage and resonate with the audience. It felt as though the characters were simply dropped into the plot and because there was no character development, it was difficult to identify with any of them or to feel anything for them and their predicaments. As a result, while the performances worked well as standalone pieces, the play was not as strong as a collective adaption.

However, the lyricality of the witches’ chanting and their recurring song were entertaining elements that greatly set the eerie mood, and the song in particular was catchy enough to be hummed by audience members during the intermission. The set design effectively captured the supernatural world of the witches, while Brian Kenny’s lighting was a key theatrical element, as was the metronome-style recorded drum of Adam Cresswell.

If there is moral that you can walk away with from this play, it’s to never piss off a woman—end of story.

Witches and Bitches runs until January 29 at Theatre Erindale. Visit theatreerindale.com for tickets.