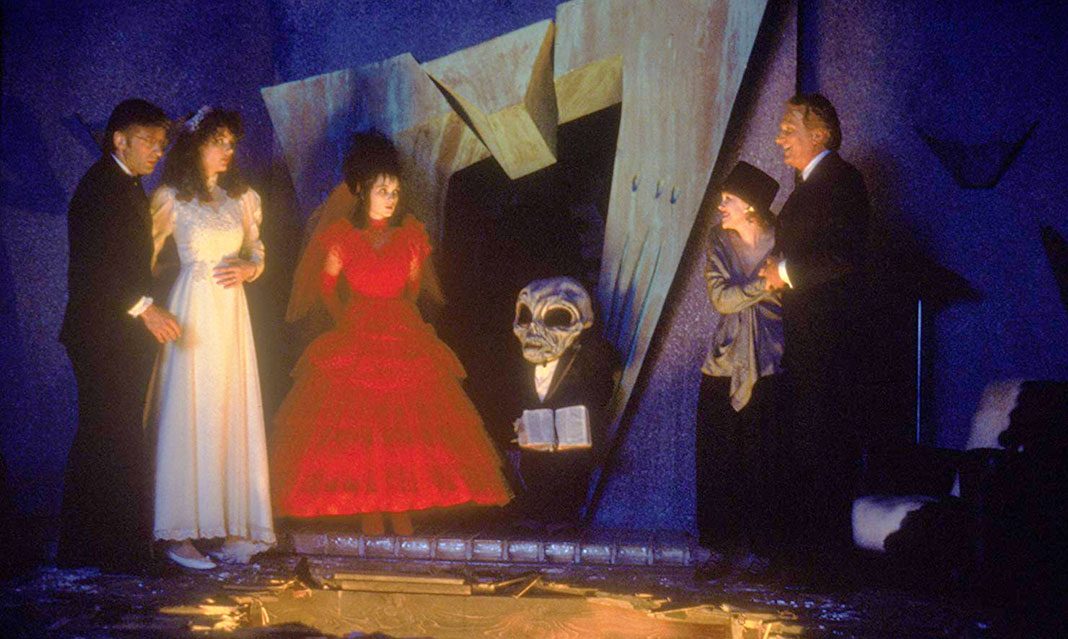 October is essentially synonymous with Halloween and gives me an excuse to re-watch my favourite Halloween classics. Every year, I always find my way back to Tim Burton’s Beetlejuice (1988).

Barbara (Geena Davis) and Adam Maitland (Alec Baldwin) were a happy couple in a small town. The Maitlands had their beautiful house, their two-week vacation at home, and they had each other. However, the vacation didn’t go as expected and their plans for peace and quiet were ruined by death. A quick drive into town for supplies would be their last as Adam and Barbara crash their car, which falls into the river. Finding themselves trapped back at their home as ghosts, they must watch while a family from New York, Delia (Catherine O’Hara) and Charles Deetz (Jeffrey Jones), take over and move in with their daughter Lydia (Winona Ryder). After plotting to get rid of the Deetzes with no successful attempts, they seek help from the infamous Beetlejuice (Michael Keaton), a troublesome freelance bio-exorcist who can only be released by saying his name three times.

Beetlejuice gives a playful interpretation of one of life’s biggest questions: what happens after we die?

In death, everyone gets their own “Handbook for the Recently Deceased.” Creatures like sandworms attack anyone they set their sights on. The dead get assigned their own caseworker. This is not the life after death one would expect.

Beetlejuice is the perfect Halloween rollercoaster. The humour never gets old and it keeps that perfect Halloween vibe if you still want to watch horror but don’t feel like being scared out of your wits. Its cartoonish horror effects are uniquely grotesque; they look ridiculous, but that’s what makes it fun to watch. These ghosts don’t actually frighten you, but they give you a variety of characters that fit the image most people think of as “monsters.” While sitting in a waiting room to see their caseworker (yes, this is still a struggle in the afterlife), Barbara looks around at the strange characters in the room and says, “Adam, is this what happens when you die?” to which the receptionist responds, “This is what happens when you die. That is what happens when he dies. And that is what happens when they die. It’s all very personal.” This personal aspect that everyone is different in death is quite charming. Shrunken heads, bisected bodies, and more draw your eyes to each character and make you wonder how they died.

Beetlejuice himself is not an ordinary ghost and is unpleasant to look at: disheveled green hair, a deep purple ring around his wide eyes, pasty white skin and rotting teeth. His outward appearance matches his personality as this odd character is crude, perverse, and loves to create chaos. Keaton as Beetlejuice is an absolute joy to watch. The bizarre facial expressions and voice comes through to show the eccentricity that makes Beetlejuice who he is.