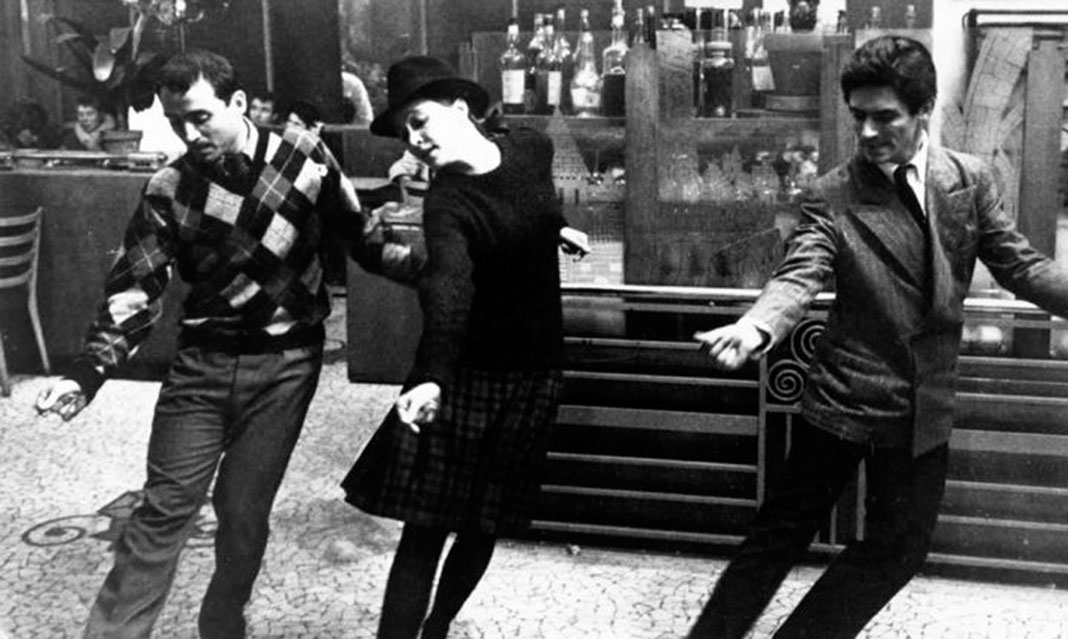 Bande à part is a 1964 French drama and crime film. The French title is derived from faire bande à part which means “to do something apart from the group.” The film starts off light and airy with three characters Odile (Anna Karine), Franz (Sami Frey) and Arthur (Claude Brasseur) spending their days sipping coffee in small cafes and dancing in the streets of Paris.

Odile and Franz meet in an English language class they both happened to enroll in. The more they spend time together, the more comfortable Odile feels to tell Franz about the stack of money hidden in her Aunts’ villa. Not knowing what to do with the information, Franz rushes to tell his friend Arthur and the two plan to steal the money. Eye gazing and compliments leads Odile to fall for Arthur and eventually she tells him the whereabouts of the money. Odile, Arthur and Franz all meet in a Parisian cafe to plot the robbery and the story begins…

Bande à part has a lively and lighthearted start, showcasing Franz, Arthur and Odile dancing and running through the Louvre, play acting robberies and shootouts. Ironically, this play-acting becomes a reality, making the characters live in a parallel world. The finger triggers are soon replaced by guns and dancing is replaced by running away.

The New Republic described Bande à part “like a reverie of a gangster movie as students in an espresso bar might remember it or plan it—a mixture of the gangster film virtues (loyalty, daring) with innocence, amorality, lack of equilibrium.” The crime doesn’t fit the true persona of the characters. Director and narrator Jean-Luc Godard relies on shared experiences to develop the characters and plot of the film. The crime scene is Godard’s own interpretation and imagination of what romantic Paris and American crime would look like if they meet in the middle.

According to Godard, we romanticize common stereotypes that are presented to us through the media, especially movies. We feed off our imagination, what it feels like to rob, steal or love. Since our imaginations are more powerful and far more creative than our daily experiences, they often become a part of us. Unlike most films, Bande à part solely examines the relationship of the director and narrator with the audience. Godard uses various techniques to relate to the viewers mind, the first one being shared experience. What Godard communicates is that our imagination glamorizes ideas such as crime and love, however when those idealistic thoughts become reality, we no longer fantasize about them.

Integral themes throughout the film play with the idea of certainty and apprehension. To the non-analytic viewer, Godard can come off as playful and nonsensical. What most fail to realize is that Godard isn’t concerned with realism—in fact, what he’s trying to convey through Bande à part is the concept that character development and plot twist derives from the fantasies that are portrayed throughout.

The narrator of the film is a character in himself, which gives the movie more of a documentary feel. Godard doesn’t leave the viewer wondering about the characters’ thoughts and feelings. He tends to explain their every move, which is intentionally done to connect with the viewer. Unlike most, this film is not concerned with the relationship of the characters and the viewer, but with the relationship of the narrator and viewer.