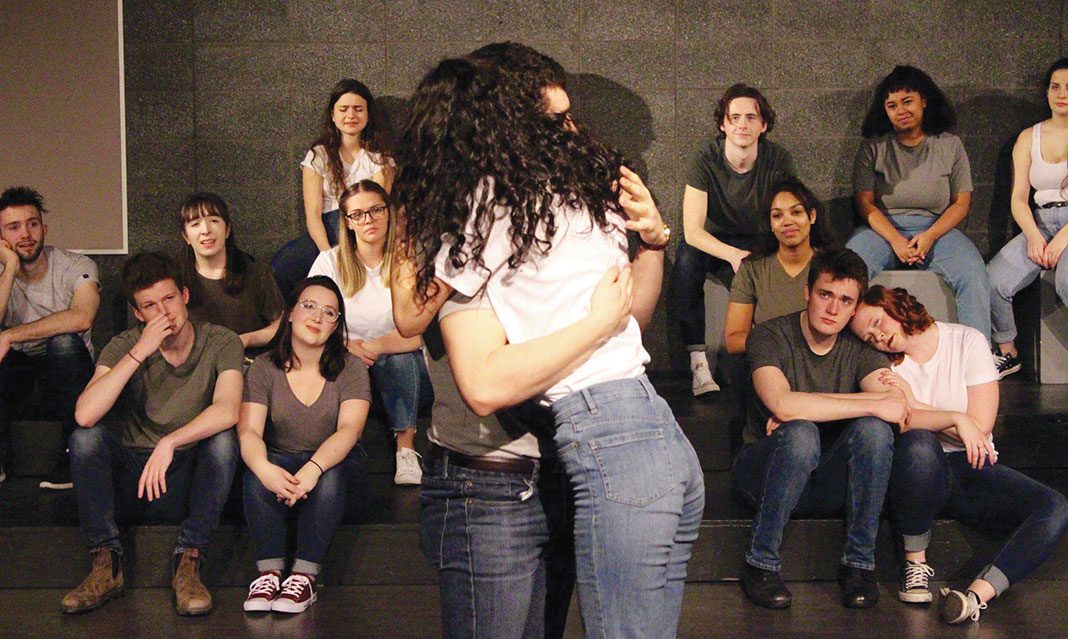 This year, the Blackwood Gallery started off the semester with their exhibition The Work of Wind: Air, Land, Sea, which explored themes of sustainability and climate change. We spoke to staff at the campus radio station, CFRE, on re-establishing their music and show programming as well as to students Ruchi Wigwe and Alexis Whelan on their artistic pursuits. Blackwood Gallery also presented When Either But Not Both Are True last October. Theatre Erindale produced an incredible year of performances, including works of: Metamorphoses, Henry IV, Blithe Spirit, In the Next Room, and Three Sisters. We covered other arts-related events as well, including Ad Summit’s Well-Fed Artist Conference and UTM Italian Studies play Ciao, Professoressa! We ended the year reviewing UTM Art and Art History program’s graduating exhibition and speaking to published student authors. Congratulations to all students involved with any of the arts related events this year. We wish you all the best this summer as you continuing pursuing the arts and seeing what you achieve next year. We’ll be following along

The 91st Academy Awards marked a night of several milestones, making sure that the award season ended on a celebratory high. A remarkable number of women and people of color took home awards, a stark contrast from the awards of previous years.

Recently, the academy has become notorious for its outdated practices and lack of diversity. With increased pressure to change from the growing Time’s Up movement and allegations involving several big Hollywood names, the limelight was on the 2019 awards ceremony to bring about a major change. And it could not have started off on a worse foot. It suffices to say that Oscar’s 2019 had a rocky start. The build-up to the night of February 24 was dominated by news of Kevin Hart’s homophobic rants and rumors of behind the scenes awards being presented during commercial. Indicating, the night could possibly be the worst in living history. Still, the Oscars pulled through. Not having a host shifted focus on issues that mattered more such as celebrating the diversity.

Some of the highlights of the evening were as following. Mahershala Ali became the first black actor to win in the same category more than once when he collected the award for Best Supporting Actor. Regina King’s Best Supporting Actress for If Beale Street Could Talk, rounded up the last of the three wins for a black woman. And Domee Shi became the first woman of color to win an Oscar for Best Animated Short.

Bohemian Rhapsody was yet another star performer as it claimed the crown of the most decorated film of the night. It managed to recover from its director’s dismissal amidst sexual assault allegations and instead brought back focus to its inspiration story of a successful gay immigrant man. Rami Malek remarked that he was proud to be part of a story that celebrated a minority group, especially considering he himself is the son of immigrants from Egypt. His own journey has all the makings of a great biopic—the son of Egyptian immigrants wins Oscar for Best Actor.

The 2019 Oscars was definitely a much welcomed sight and let us hope this is a sign of more positive things to come in terms of diversity and equality. Though these milestones are worth celebrating, it’s worth noting how absurdly long it took for us to get this far.

A Star Is Born

In October 2018, the fourth rendition of A Star is Born, starring Lady Gaga and Bradley Cooper as Ally and Jack, was released and became an instant pop culture sensation. The film garnered much critical acclaim from both critics and audiences, especially for the actors’ performances. Their performances were honest, relatable, and vulnerable, which is why it’s easy to sympathize with these characters even though they don’t always do the best or the right things. This film was also Bradley Cooper’s directorial debut. The film was nominated for eight Academy Awards including Best Picture and “Shallow” was nominated for Best Song.

The hit song, “Shallow,” became Lady Gaga’s fourth number one song on the Billboard Charts and thousands of covers of the song popped up on the Internet. “Shallow” won in its category, and Cooper and Lady Gaga gave an intensely emotional performance of the song on the telecast, putting the song back on the charts.

Everyone seems to agree that this is a good remake of a film. The original story is still there but it’s new and modern with fresh takes on old themes such as romance, self-reinvention, fame, and feminism. The 2018 film is heavily influenced by the 1976 version, starring Barbara Streisand. Some scenes directly came from that version such as the scene where Jack says, “I just want to take another look at you.” However, instead of jealousy being Jack’s major character flaw that leads to his downfall, in the 2018 version, the problem is his addictions to drugs and alcohol. Cooper’s version of the story felt like a story that was made for 2018, everything from the costumes to the music to the way the couple dealt with their problems felt right—it felt realistic.

The entire movie was overall really well done and really well thought out. While it may have been influenced by previous versions and other stories, it’s a movie that stands on its own and when audiences think of A Star is Born, they will think of the 2018 movie.

A few weeks ago, the much anticipated third season of Queer Eye was released on Netflix. Everyone’s favourite Fab Five returned to Kansas City, Missouri to help Americans become the best versions of themselves. If you’ve never seen the show, here’s a quick rundown: Jonathan Van Ness does hair and skin care, Tan France does wardrobe, Bobby Berk does home renovation and interior design, Karamo Brown does culture and social skills, and Antoni Porowski does food and these five gay men give someone a complete makeover. This show is funny, uplifting, and heartbreaking all at the same time. It definitely tugs at your heartstrings and tear ducts.

Queer Eye became a pop culture phenomenon when it was first released in February 2018 and collected three Primetime Emmy Awards. At its core, Queer Eye is a reality show but it’s unlike most such as The Bachelor/ette, Survivor, or The Voice, which have a lot of hysterics and trivial drama. Queer Eye is much more structured and lets the audience get to know the individuals, and it highlights everyone’s best qualities rather than their worst. Overall, it’s more thoughtful and heartfelt.

The show’s tagline is “More than a Makeover.” The Fab Five want to help these people in all aspects of their life, not just their physical appearance. Yes, Jonathan and Tan help give individuals a physical makeover by helping tame their hair and improving their wardrobe, but it’s also a personal, inner makeover, where individuals realize why their struggling and come up with strategies on how to be better. Throughout the five-day makeover process, the Fab Five offer great advice about food and fashion and hair care that is not only applicable to the individual they are helping but also to the audience who is watching the show at home.

Queer Eye is a show that everyone can relate to on some level. This show breaks down cultural barriers and shows us that no matter where we come from, no matter what we look like, we are all capable and deserve to do great things because we are worth it. It’s worth taking the time to invest in ourselves.

Us, by Jordan Peele, is a perfectly chaotic metaphorical thriller. It is Peele’s next film after his successful Get Out. Us stars a cast of actors who deserve large amounts of recognition for their roles. Lupita Nyong’o is terrifying as Red/Adelaide Wilson. Winston Duke is a breath of fresh air in this neo-thriller. The children who are played by Evan Alex and Shahadi Wright Joseph are breakout stars. Madison Curry stars as young Adelaide, who plays a pivotal role in this film.

The movie centers around a family whose holiday escape is to an old family home. They are attacked by a psychopathic version of their doppelgangers. The doppelgangers are terrifying yet satirical – what if we had a twin we never knew existed? This movie is defined as a horror, however, it is more of a satirical thriller. There are certain scenes of classic horror within the film, mainly portrayed by the brilliant Nyong’o However, this film is a very layered one. It is a level of thriller that has not been done since Kuberick. At a time when polarization between class and wealth is influencing political choices, as well as the divide between the right and left, this movie is exceptional.

Furthermore, Peele’s movies manage to create an underlying tension and uses conventional movie tropes, yet he will flip these on their head to make the audience think. Whilst there are plot holes, the movie is open to many interpretations, which is the genius of this movie. It is not as direct as Get Out. Instead, it turns us against ourselves. The cinematography and the soundtrack are mesmerizing. Peele does long shots using a soundtrack that is haunting.

What makes this movie groundbreaking is the effect of its underlying message. Very few horror movies manage to convey a socio-political message. Furthermore, Peele has created a world within horror where black lives matter. He is turning old horror tropes on their head. These acts seem miniscule but the representation on screen is important. He has built a world where black people and those who are often repressed, such as the poor, can have their voices heard.

In Us, Peele uses classic horror jump scares to make people think about their life and societal structures. Whilst this movie has multiple messages, Peele has crafted it in a way that even if you disliked it, you will still think about the film. This, in my opinion, is what makes a movie great. If Peele can use his art space to make people aware of socio-economic problems, then he is one of the greatest filmmakers of our time. He is returning with the reboot of “The Twilight Zone” later this year.