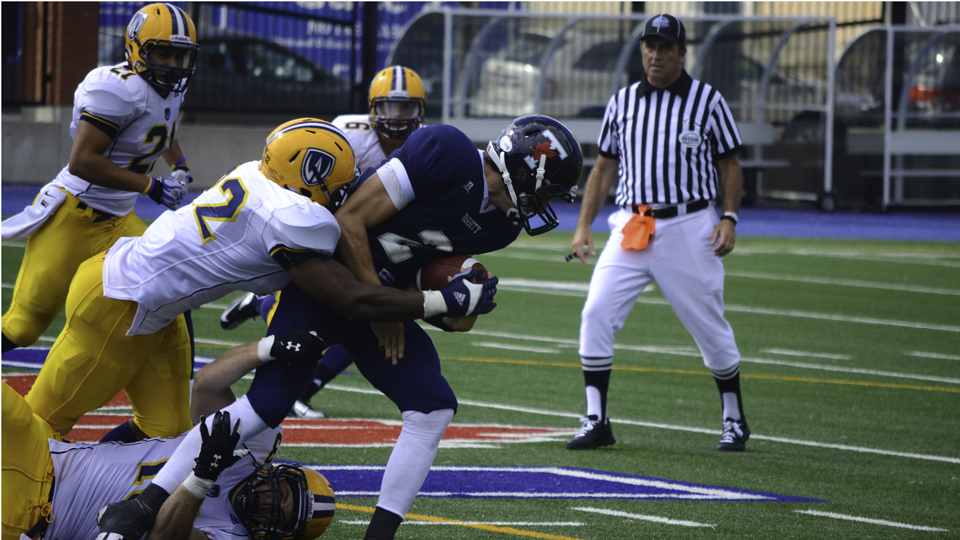 For the second game in a row, the U of T Varsity Blues football team were beaten and outscored by over 50 points. The Windsor Lancers walloped the Blues 55–4 at Varsity Stadium on Saturday, in front of a crowd of just 1,512 spectators.

The game’s action started almost immediately. Windsor running back Mitch Dender opened the scoring on the team’s third drive by punching in a three-yard rushing touchdown. This set off his big half, in which he netted 93 of his 108 total yards on the ground. Shortly after Dender’s goal, the Blues found themselves on the board as Andrew Lomasney nailed a 26-yard field goal, bringing the game to 7–3.

Richard Quittenton made a one-yard rush to the sideline in a drive, and then lost his helmet when Jake Nicoletti tackled him out of bounds, leading to a 15-yard major penalty for unnecessary roughness. Lomasney got in position to make his chip shot. After the flag, Blues running back Ashton Nelson had two runs of seven and eight yards, but it was Quittenton’s pass to UTM’s Stephen Boroniec for 17 yards down that put the team in the red zone. That was as close as it got for Toronto.

After each team dealt with two pairs of two and out, Austin Kennedy—an early-season favourite for the Hec Credighton Award—completed a 57-yard touchdown pass to slotback Jordan Brescacin, ending the first quarter. The second quarter kicked off with Kennedy getting his second touchdown pass after an 18-yard dart to slotback Evan Pszczonak.

Toronto’s backup quarterback, Chris Jugovic, was under centre for the next drive, but was ineffective. He threw an incompletion and lost a fumble forced by Windsor defensive tackle Tai Pham on the next play.

Four series later, Toronto’s Spenser Stewart managed a key interception off a tipped pass from Kennedy with a 32-yard return to get the ball to Windsor’s 40-yard line. Toronto was unable to capitalize on the field possession, as Lomasney missed his 30-yard field goal attempt. The Blues were able to get a single point on a rouge when Windsor’s return man Shea Pierre was unable to return the missed kick out of the end zone.

Windsor’s Stewart punched in a rushing score from the one-yard line to push the halftime lead to 31–4. Kennedy’s score stood out, going into halftime with 244 yards thrown on 11 of 16 passing.

The crowd was treated to a presentation by the Rameses Shriners fraternity, who presented their flag and gave a musical performance.

Halftime changed nothing for the Blues. Windsor pushed the lead to 45–4 from another Stewart rush of nine yards for a major and a 20-yard interception off Quittenton for a touchdown by linebacker Marcus St. Aubin.

The last points of the day came from Dan Cerino with a 32-yard field goal and from Dender, who put the final score on the board with a one-yard touchdown run.

Toronto was outgained 554 yards to 309 and also lost in possession time by 43:22 to 33:57. Quittenton finished the day with seven of 23 passing for 115 yards, three interceptions, and four sacks, while Ashton Nelson gained 116 yards on the ground on 21 carries. Windsor’s Kennedy finished with 300 yards on 14 of 21 passing and two touchdowns.

Coming from his team’s second straight defeat in which over 50 points were scored, head coach Greg Gary immediately led the team to the end zone for a rare on-field post-game team meeting.

“I just told them that we have some decisions to make as a program. Whether we’re going to be competitive or not, I said our preparation has to be better. Because clearly we’re not preparing well enough to win football games, or even to be competitive in football games,” he said. “We have to do that. I told them we have to come back on Tuesday and get back to work. That’s all you can say after this, and after last week.”

Even in defeat, the UTM presence among the Blues was felt. Boroniec finished the game with two catches for 22 yards and two tackles. Boroniec, a silent leader, is used to doing things beyond the requirements of his position. He started as an offensive lineman in high school at St. Marcellinus Secondary School, and switched to running back when he joined the Blues. He is often seen catching the ball out of the backfield. “I [have] been playing every position on the field now—get to get the ball in my hands, get to make some blocks, and sometimes win the game. Unfortunately, today wasn’t that result.”

Abiodun Olusoga, also from UTM, returned from a one-game suspension after being ejected for a kick in the team’s first game, which was against Wilfred Laurier. “Abi”, as his teammates call him, finished with a team leading eight tackles, two for a loss, and four quarterback hurries. “I was motivated,” he said. “I let my team down by not being there last week. I was just trying to get the boys up; unfortunately, it went for a loss.”

Olusoga, a standout with his distinct on-field fashion sense, embraces the heckling that comes with wearing only one long white sock. “I gotta do something different when I’m on the field. I gotta represent, do something a little different,” he says. “Keep one sock high and one sock low.”

The Blues return to national television next Saturday at 1 p.m., when their next game will be broadcasted on The Score’s University Rush series as they head to Guelph to take on the Gryphons.