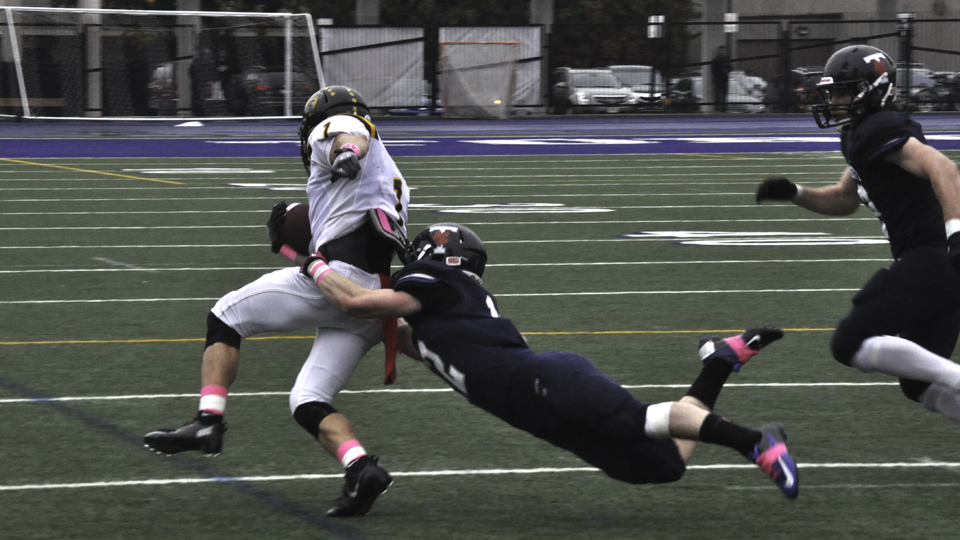 On a rainy afternoon on Saturday, October 19, the University of Toronto Varsity Blues took to the field for their final game of the regular season against the Waterloo Warriors in attempt to reach the .500 mark for the first time since 1993. As part of the festivities, the Varsity Blues honoured upper-year graduating members of the team who would play their last game in Blues’ uniform; among them was receiver Paul de Pass, who began the game 128 yards away from breaking U of T’s all-time receiving yards record.

The first quarter began with the Varsity Blues struggling to connect on any plays and bring them to fruition, resulting in an interception from Waterloo at U of T’s 25-yard line, which led to an astounding 28-yard reception by wide receiver Nick Anapolsky of the Warriors to put his team on the scoreboard with a 7–0 lead. Anapolsky, who was playing his last-ever football game at the university level, was attempting to break two records of his own during the game, being three interceptions away from beating the OUA receptions record, and seven receptions away from the all-time CIS record. Inching their way towards the opposition’s end zone, the Blues answered immediately by making Waterloo concede a safety, bringing the score to 7–2. Before Waterloo could catch their breath, U of T was on the offensive once again, with quarterback Simon Nassar connecting with de Pass for a 16-yard touchdown to give the Blues a 9–7 lead halfway through the first quarter and something for the loyal fans who braved the rain to cheer about. As the first quarter neared its end, the Varsity Blues continued pressing the Warriors’ defence. Nassar put out a pass which looked as though it wouldn’t find anyone, until receiver Alex Pierzchalski made a diving grab for a 17-yard touchdown reception, giving the Blues a 16–8 lead at the end of the quarter.

The second quarter was relatively quiet, without any scoring until the halfway mark when Varsity Blues placekicker Eric Hewitson, a UTM second-year English major, booted a 32-yard field goal to give the Blues a 19–8 lead. Though the Warriors weren’t able to answer on the scoreboard, wide receiver Anapolsky broke the all-time OUA record for the most receptions in a season with 69, and was poised to smash the CIS record before the end of the game. Waterloo’s defensive back, Alasdair Coy, maintained the momentum by scoring a 23-yard field goal to make the score 19–11 at the close of the half.

As the second half began, the Blues attempted to increase their lead and did so less than five minutes into the third quarter when de Pass made a 67-yard touchdown reception, giving the Blues a 26–11 lead, with de Pass three yards away from breaking the all-time U of T record. The dominant play was continued by Varsity Blues’ running back Aaron Milton, who made a 73-yard rush to the opposing end to put his team in scoring position.

U of T’s Pierzchalski scored his second touchdown of the game with a five-yard catch to put the team up 33–11 with under four minutes to go in the third quarter. With a minute left in the third quarter, receiver de Pass became U of T’s all-time career receiving record-holder, breaking Mark Magee’s record of 2,385 yards by two yards, and celebrating amid the applause from spectators and hugs from teammates. To keep the crowd cheering, the Varsity Blues capitalized on a penalty incurred by the Warriors when punter Marcus Hobbs scored a touchdown to give the Blues a 40–11 lead with only 30 seconds left in the quarter.

As the final 15 minutes of the Varsity Blues’ season began, the team tried to hold off the Warriors as best they could. Unfortunately, a penalty incurred by the Blues led to the Warriors’ running back, Glorian Ganza, scoring a touchdown to bring the score to 40–18. As the Warriors tried to make a comeback, U of T stretched the lead even further with a 103-yard touchdown reception by de Pass, which gave his team a 47–18 lead. As the Blues continued to put the pressure on, another record was broken by safety Kevin Bradfield, who became the Varsity Blues’ all-time career punt return yards record-holder. With under three minutes remaining, Hewitson rocketed another field goal to give the Blues a 50–18 lead. Though things looked bleak for the Warriors, Anapolsky managed to secure his spot as the all-time leader in CIS history for most receptions in a single season. With the seconds winding down to end the game, the crowd erupted one last time this season to celebrate the Varsity Blues’ fourth win of the season and the first time in 20 years that they’ve reached the .500 mark.

The magnitude of this victory was felt by the players and coaching staff. “It’s huge! It’s been 20 years, and we’re really doing something right now,” says Bradfield, a third-year employment relations major. “Things are changing around here. We really made a statement this year. We had a couple close games, but we put in work this year. And we’ve shown the league that we’re a force, we mean business, and we’re not playing around.”

The victory was bittersweet for de Pass, who ended his five-year long career with the Varsity Blues in style. “It’s rewarding, first and foremost, and exciting. I’ve spent a lot of time in the program, so to break a record that has been longstanding is a really good feeling,” said de Pass, a history major.

“I think that this team is starting to gel. We’re disappointed [to lose] the veterans like Paul, but we think we have young guys who are coming up that can replace them over time,” said Greg Gary, the head coach of the Varsity Blues for the fifth year in a row. “I think the program is on the right track, I think we’re trending upward.”

Gary believes the team still has at least one more year of rebuilding before they can play at a higher level in the OUA. “I think it will still take some work to get there,” he said. “But I think these are pretty good indicators that we’re moving the program along.”

After giving their best effort in 20 years, the Varsity Blues end another chapter in their rebuilding process and move a step closer to achieving their goal of a championship. The players and coaching staff are confident that victory is on the horizon, and promise to give U of T a lot to cheer about in the coming years.