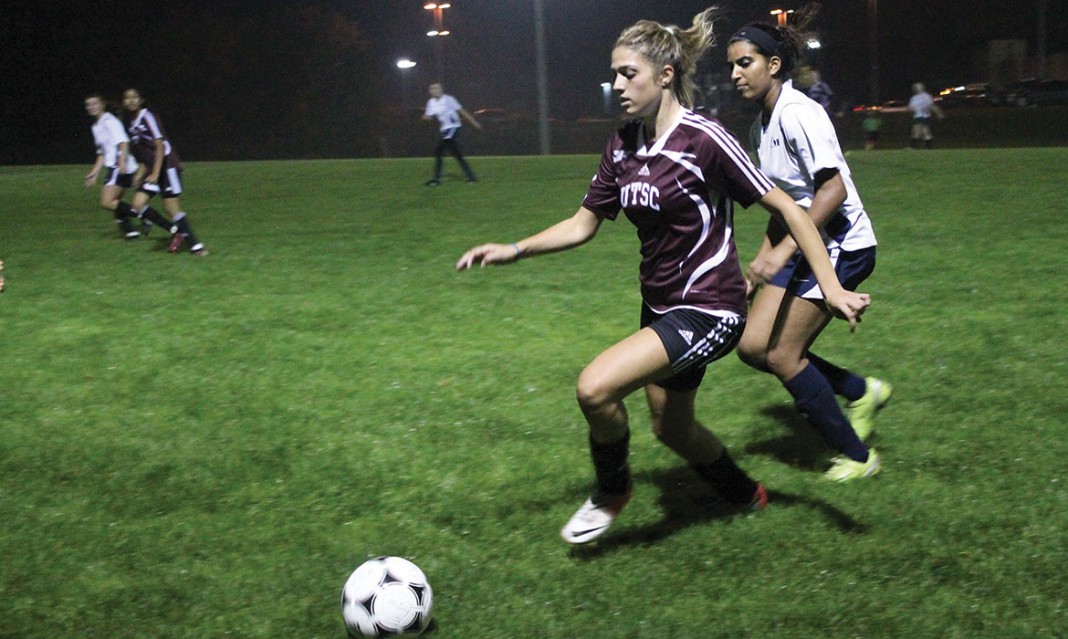 UTM hosted UTSC in intramural women’s soccer Wednesday night at South Field, the first game of a double-header with the men’s intramural soccer team playing immediately after. This game is the third game of the season, and the UTM women are up against UTSC, a team that has not yet lost this season.

UTM came out with a traditional back four and two strikers up front in a 4-4-2 formation. They played fluidly, with the midfielders dropping back and pushing forward when needed. UTM threatened early with a corner leading to a shot on target, but it was shot directly at the goalkeeper. UTM followed up with another great opportunity near the end of the game. UTM dominated possession early in the game, easily outshooting UTSC. UTSC was forced to counter on the wings, giving UTM quite a bit of trouble as UTM’s back line often pushed forward to support the attack.

UTSC struck early, scoring a screamer from outside the box at a very difficult angle. Whereas UTM relied heavily on short, quick passing, UTSC focused on the long ball with great success. The wet conditions stifled UTM’s passing and caused great difficulties for UTM’s finishing. UTSC played quite physically, forcing physiotherapist Dr. Nourus Yacoub onto the field multiple times. Just before halftime, UTSC scored a second goal in a confused melee when the UTM goalkeeper was drawn out too early.

Heading into the second half down two goals, UTM made some changes. UTSC was dominating the wings and the midfield moved from a diamond formation to three in the middle with no wingers. The midfield moved to a more box-to-box playmaking role, freeing up the forwards to press forward earlier and faster. UTSC also stepped up their offence in the second half; their forwards had more flexibility to move up and down the full length of the field, and their playmaking really stepped up a notch as they shot more, from more dangerous positions, in the second half.

UTM finally scored in the 50th minute. Attacking midfielder Christina Rico played a brilliant through ball in the 57th minute that led to forward Chantel Pandeirada tapping in the ball in the resulting scuffle, pulling UTM within one goal of UTSC. A few minutes later, UTSC managed to score a total fluke goal on a cross attempt, making the score 3-1 UTSC. UTM switched to a back three with an extra forward in an attempt to chase a late goal. Finally, UTM pulled within one goal again towards the end of the game on a UTSC own goal. Unfortunately, that was the last goal of the match. Despite some brilliant opportunities in the last few minutes, UTM was unable to score that equalizer. The final score was 3-2 in favour of UTSC.

Coach Damian Yearwood remained upbeat. “Tough loss? Bad luck. We played very well despite not getting the goals we deserved,” he said. The team performed admirably and created many dangerous chances. UTSC simply had better finishing with their long shots. They only managed one more shot than UTM, and despite the loss the UTM women never looked overmatched.

The UTM women will play their next game against UTSC at the Scarborough campus on October 26.