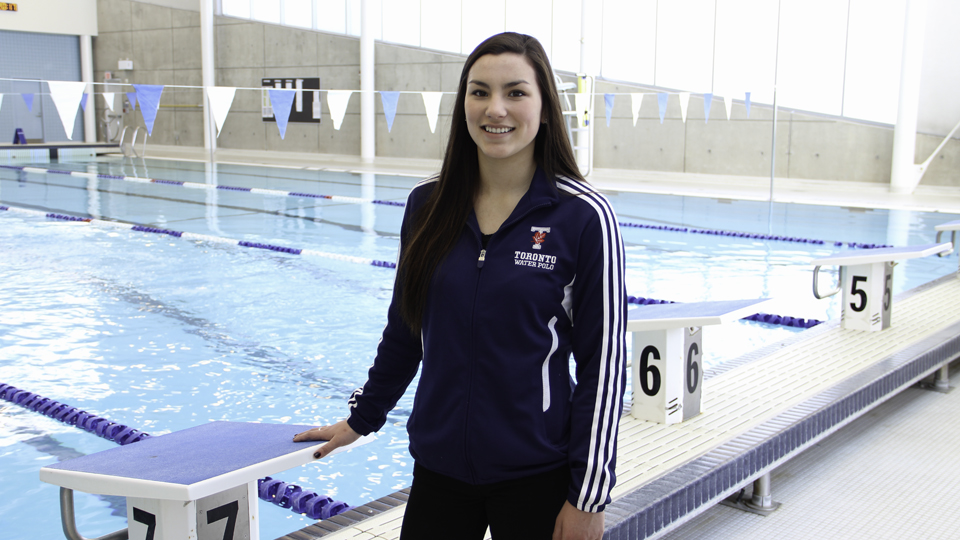 Strength, endurance, quick reflexes, and awareness—these are the requirements of a successful water polo player.

For UTM’s Stephanie Watson, these abilities come naturally. Watson plays the right side for U of T’s Varsity Blues women’s water polo team, the 2013 OUA champions. A native of Victoria, British Columbia, Watson entered the sport at the age of six by playing mini-polo, and has been hooked ever since.

“I like water polo because it has aspects of many sports incorporated into it,” says Watson. “It’s not only about being the fastest or the most skillful. You have to use your head and be a smart player for the best results. Also, the fact that it’s a team sport really teaches you how to work together and be a team player, [which] you can apply outside the pool as well.”

Since universities in BC didn’t offer the sport, the second-year economics major came to U of T after being contacted by head coach George Gross. “I thought it was a good fit for what I was looking for,” Watson explains.

After completing her second year on the varsity squad that went undefeated throughout the regular season, Watson has settled into her new environment at UTM quite nicely.

“Coming to Ontario and not knowing a single person, my varsity team became my second family,” she says. “I was lucky to have such caring upper-years I could go to for advice through all the changes.”

Despite the new network of friends made on campus and through the varsity program, the decision to leave home and become independent wasn’t easy for the varsity star.

Even so, “I made some pretty amazing friends here. They help me get through it,” Watson says. “And as much as I miss home, I’m glad I get to experience moving away, taking care of myself, and having responsibilities. It really helps a person grow up.”

Watson plans on returning home after her time at UTM is over. “I really enjoy living in a big city like Toronto because there’s always something to do, but when I graduate, I’m definitely going back to BC. The nature there is so beautiful, it just doesn’t compare,” she says.

Though the polo player is currently in the off-season, the buzz from winning the OUA championship still hasn’t subsided. Not only were the Blues able to go undefeated over the course of the regular season and playoffs, the team also managed to win their games with large margins, ultimately winning their final game against Carleton University by a score of 10-4. This was the sixth time the teams have met in the women’s water polo final since the creation of the varsity women’s water polo team.

In Watson’s first year with the Blues, the final against Carleton went into a shootout that resulted in U of T losing 6-5 and earning silver. This year, she was happy to be on the winning side. “It was my first experience winning a championship, and it was nice to be recognized for all our hard work and dedication throughout the season,” Watson says. “My team trains really hard, so it’s nice to have something to show for it.”

Head coach George Gross praises Watson for her work ethic throughout the season. “[She] was always a threat to score and did score multiple goals on the power play but also set up other players when the defence started keying on her,” he said. “Watson also set a wonderful example of a strong work ethic combined with technical skills growth.”

Now that her goal of winning a championship has been accomplished, Watson has a new set of goals in mind for the 2014 season. “As an athlete, I feel like you can always set new goals for yourself once you accomplish existing ones,” she says. “Next season, I hope to play to the best of my ability and win the banner again!”

Note: The print version of this article mistakenly referred to Stephanie as “Jessica”. It also included a photo caption intended for another article. A notice will be printed in the February 10, 2014 issue.