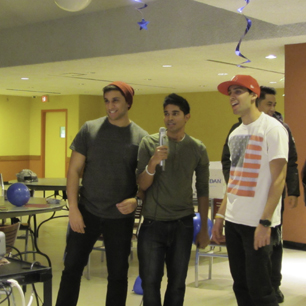 The UTM Dance Team hosted Dance Pub last Thursday in the Blind Duck for the eager patrons looking to celebrate an evening of dance and socialize with some the dancing community on campus.

Tickets were $10 in advance and $15 at the door. There was a modest turnout of excited friends and fans to see the performances.

Students and family crowded into the rows of chairs in the pub to support the variety of groups and clubs on campus featured, including Dance Club, Dance Team, Style and Profile, and Caribbean Connections. The showcase went from 8 to 10 p.m.

“The show went really well,” said Eliza Khan, one of the executives of SAP. “We all had a lot of fun. We could have used more space for some of the numbers, but apart from that, really great.”

Jenna Malone and Becky Arnott hosted the showcase. “It’s our second year hosting together, and we’re happy to be back supporting Dance Team,” said Arnott.

Many of the performances were choreographed by the dancers themselves. They impressed the audience with their variety, precision, and choice of song.

The dance numbers choreographed by Amy Smith and Alexandra Ieraci were particularly well received, with some praise for the fun-filled SAP numbers towards the beginning of the showcase.

After the showcase, the rows of chairs were cleared and the pub was transformed into a regular social event, with the dance floor open to everyone. The night trailed off slowly, with people drinking and dancing casually until the 12 a.m. close

“Towards the beginning of the showcase, the dance numbers choreographed by SAP’s Amy Smith and Alexandra Ieraci were particularly well received.”