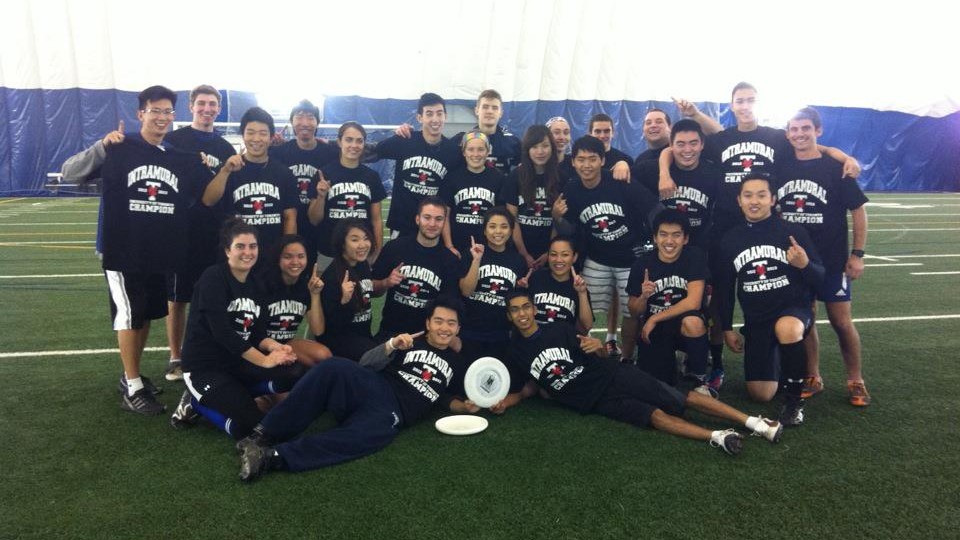 The Division 2 ultimate frisbee team capped off their semester with a perfect 8–0 season, winning their first championship in four years. On Saturday, the Eagles travelled downtown to play at Varsity Stadium in the semifinals against Skule A, whom they defeated 9–4.

After a 20-minute resting period (compared to their opponents, Victoria College, who had an 80-minute break), they played the final to see who would be crowned the U of T outdoor ultimate frisbee champions.

With a starting line of Eric Mark, Chester Mui, Ryan Mooks, Viren Patel, Cassee Hayes, Alex Rowles, and Janny Hyunh, UTM took the lead early and never looked back. UTM was ahead by 3–0 five minutes into the first half; two of the three points came from Mui, their top scorer this season. After scoring their first two points, he celebrated by demonstrating to his team how to channel their inner Ray Lewis and Cam Newton. With a 5–0 lead at half-time, head coach and player Chris Wong told the team to keep pushing.

The second half was a mirror image of the first half as UTM kept up their lead.  Victoria College couldn’t break the momentum of their hard defensive plays and diving grabs. Even before the last point was called, the excited Eagles were spraying each other with water on the sidelines in celebration.

When the time ran out, the final score was 14–2 for UTM. The team rushed the field for a huge victory cheer and dance, and the players dumped water on their head coach, drenching him.

Wong posted some words on the team’s Facebook group after they won. “Div. 2 ultimate champions! Congrats to everyone! Every single one of you [was] awesome today, and I think we fully deserved the wins and justified why we’re the champs and why we’re undefeated,” he wrote. “Loved how you guys totally brought the game on from the get-go, cheering on the team and getting really vocal on every possession. […] It feels amazing to finally win it after the four years I spent with the team, but it feels even better to have won it all with you guys. […] Let’s carry this into indoor season.”