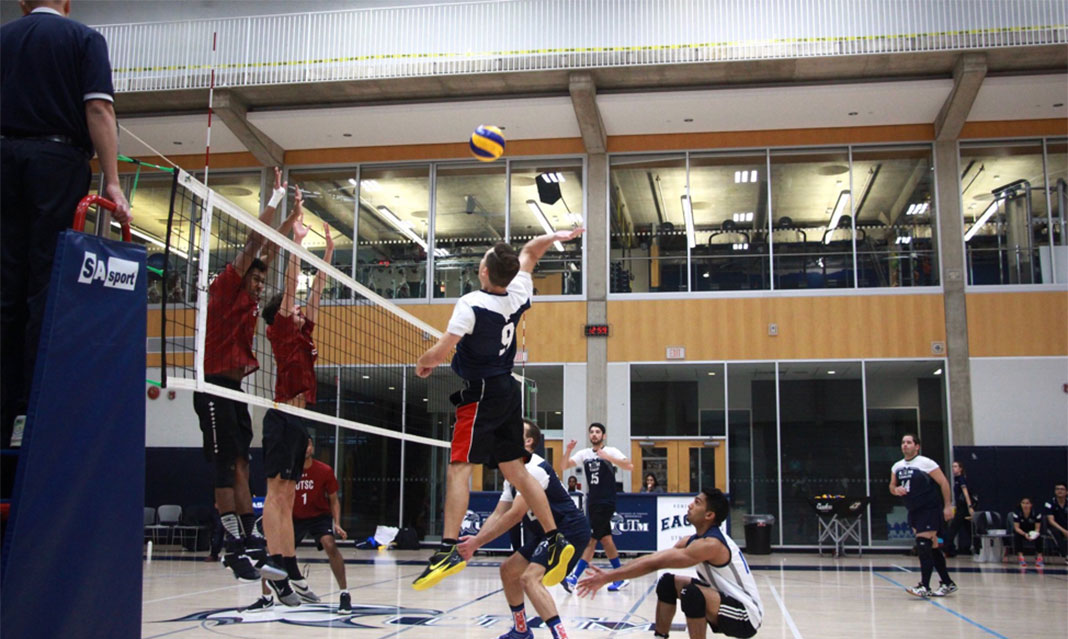 It’s 2:30 p.m. on Sunday, November 11 at the RAWC. The referee blows the whistle to start the deciding game, the Eagles chant, “One, two, three, Eagles!” and run on the court to their positions. The UTM d-league men’s volleyball team have come back from an 0-2 deficit to tie the series and head to a game five.

The men’s volleyball team at UTM have had a lacklustre history. The 2017-2018 season winning only two games in the regular season, and the year before, losing in the first round of playoffs. The team entered Sunday’s match with an undefeated 3-0 record, having faced the notoriously strong St. George Reds, St. George Blacks and UTSC Raccoons. UTM Assistant coach Jeffrey Wang attributes this drastic change in performance to “[the players] show more commitment and have an attitude of wanting to improve. We’ve had problems with attendance in the past, but this year the players come to practice 30 minutes early.”

The Scarborough Raccoons enter the RAWC to avenge their 3-0 loss to the Eagles, this time with their star player who was absent in the first match. The match begins at 1:00 p.m. and the first and second game both begin with the Eagles taking a significant early lead and then losing it at the end. The Eagles morale is at a low when Scarborough breaks the pattern and takes an early lead, 7-1. Scarborough misses their next serve and now its third-year middle-blocker Joel Mcleod’s turn to serve. He serves a jumping float which leads to a poor receive and thus, a weak offensive set-up by Scarborough. They bump the ball over, giving UTM a free kill opportunity. “Free Ball!” yells third-year right-side hitter Diego Solari, and spikes on the third touch for a point. Mcleod serves four more times, consistently hitting offense-breaking floats leading to poor hitting options for Scarborough and brings the team to tie at 7-7. The audience joins in to cheer and the energy for the starting six is back where they needed it. The team wins that game and the next, leaving the match to be decided in a fifth set.

There are many schools of thought for what kind of sport volleyball is. Whether it’s a game of height only made for giants, of athletic prowess for gym lovers, or of skill and court vision for the experienced. What is shared between all the schools of thought is that the game of volleyball passes by at a moment’s notice. It can be a competitive game where making the most out of every possession is the core of the sport. A couple consecutive mistakes and victory will slip out of reach. This is especially true for a fifth set where it only plays to 15 points versus the normal 25.

Set 5 begins with UTM serving in S1 rotation. This means the setter is serving, so there are three available front court hitters, giving them the most offensive options. The two teams feel the pressure of the moment, opting to safe play and the two teams score back and forth evenly at 8-8. UTM makes a break with second year master’s student Patrick Bilas, a veteran of the school team, and finish the match 15-11.

Having a flawless season on paper does not change what the men set out to achieve by the end of the season. They aim to remain faithful to the process of getting better by attending practices and training off-campus. The university is also beginning to invest more in the men’s d-league team, the first signs of this is bringing in OUA experienced volleyball coach Dan Hayes. He sets his sights on making the team varsity level.

Fourth year setter, and core member of the team for several years, Lucas Linhares, played an integral part in Sunday’s victory. When asked about his performance, he said “I’m a perfectionist. I always think I could have done better … but overall I think I made the right decisions at the right moments and [the team] won collectively.”

If the men’s team can keep up this attitude, and learn from the previous year’s inconsistency, having a d-league championship will make for an excellent addition to the resume for entering the OCAA league.