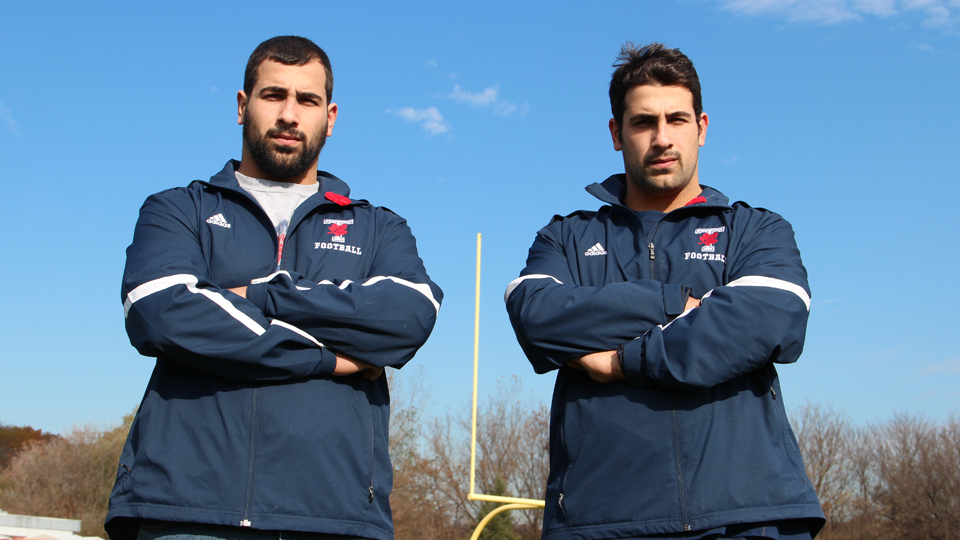 Being competitive comes naturally to Jordan and Justin Marra. The Brampton natives, Varsity Blues football players, and fourth-year UTM students expect to be the best at everything they set their minds to. The twin athletes strive to become as effective as they can be, whether it’s at practice, in the gym, or in the classroom. “Growing up in a competitive and supportive household, we were determined to be the best football players that we could possibly be,” says Jordan, a history major and the Blues’ defensive lineman.

For the Marra brothers, football isn’t just a recreational sport—it’s a lifestyle. “We spent hours on the football field over the past 14 years developing our skills with coaches, gaining an understanding of the game that’s instinctive,” says Justin, a classics major. “We became essential pieces [of] any team we played on, and believed that we could compete to be the best at any level. I don’t think there was a period of realization; the CIS was just the next step up from the OVFL and high school.”

Jordan and Justin credit their upbringing for instilling the importance of winning in them. “Leadership is something that’s natural to us,” says Jordan. “Our father always preached leading by example.”

Their leadership on the Varsity Blues has had a noticeable effect on the younger players. “The Marras have been like fathers to me,” says Jordan Brown, a UTM second-year sociology major and Blues offensive lineman. “The leadership and guidance they’ve provided has been invaluable.”

The Marra brothers were instrumental in the Varsity Blues’ success this year. The team finished the season with a 4-4 record, arriving at the .500-mark for the first time in 20 years. Both brothers play on the defensive side; as guards, their job is to protect the running game and make things difficult for the quarterback. U of T impressively established one of the league’s best-run defence squads, taking seventh place in a 27-team competition. “It means a lot to us to be a part of a tradition that has been around for over a century,”  Justin comments.

While the brothers recognize the importance of classroom learning—Jordan in history, Italian, and geography, and Justin in classics and religion—football is like an education in itself, and one they’re even more passionate about. “We train hard and don’t take anything for granted. We spend hours watching film in preparation, as well as hours in the gym,” says Jordan. With the 2013 season over, they’re already preparing for next year. The atmosphere in the Blues’ locker room is different from past years, though. The team is more confident in their ability to win a championship for U of T, and the Marras share that sentiment. “We have the tools to become a Yates Cup contender,” says Jordan. “It’s a very realistic goal for next season.”

Students can look for the brothers on campus next September, donning their Varsity Blues crests and wearing the blue and white of their team.