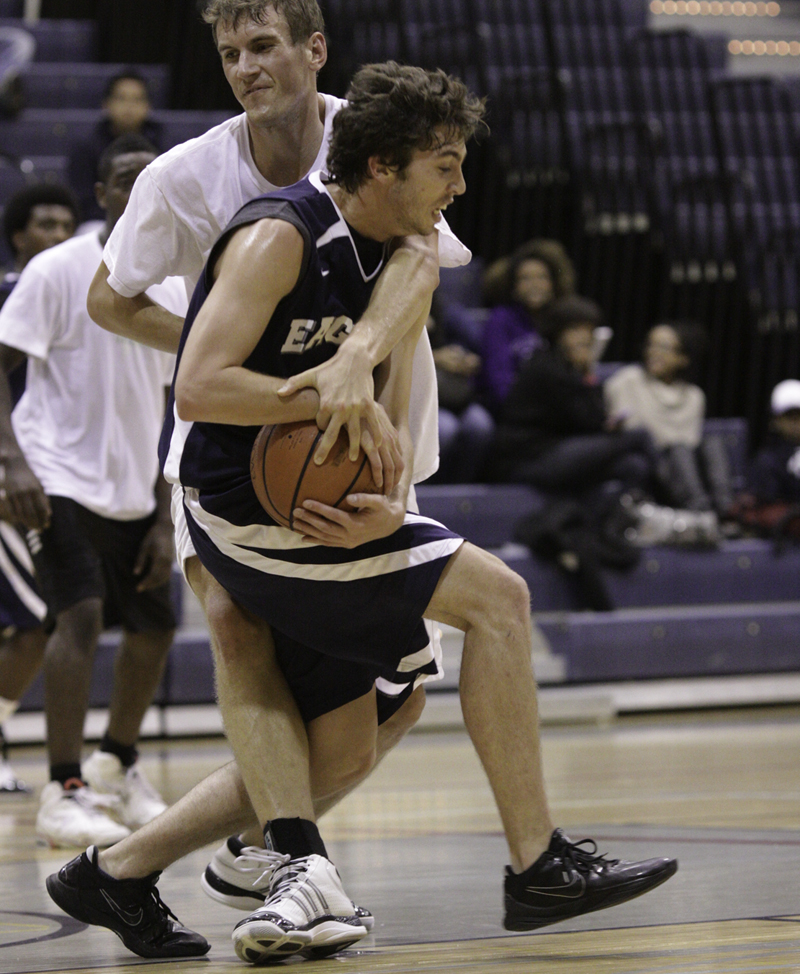 On Wednesday, October 19, UTM Blue played their Division 1 home opener against the Faculty of Physical Education and Health. Despite their best efforts, the UTM men’s basketball team was defeated by FPEH, with a final score of 71–80.

Although UTM sunk the first basket of the game, FPEH came out strong and got 14 points in a row. Kevin Sutton countered with a free throw after an FPEH player fouled him and then Fedja Kuljanin scored a basket, making the score 5–14. By the time UTM called their first timeout, the score was 10–18.

After the timeout, FPEH continued to capitalize on UTM’s mistakes and got another six points, making the score 12–24. After that, UTM started to wake up. They scored a 3-pointer and drew three fouls. Kent Bray, who drew two of those fouls, sunk his first free throw, and although he missed the second one, he was able to regain the ball. This led to another two points for UTM. When Bray drew the second foul, he was able to sink both free throws to make the score 23–26.

After that, it was back and forth, with UTM and FPEH trading points until halftime. FPEH taking a narrow lead of 34–37 into the break.

FPEH started the second half by drawing a foul and getting both shots in. UTM’s Kent Bray drew a foul of his own shortly afterwards and also sunk both his shots. Kuljanin’s score brought UTM to a 1-point difference, and after FPEH scored only one of their two free throws, UTM tied the game, 40–40.

FPEH countered by throwing a 2-pointer and two 3-pointers. By the time FPEH called for a timeout, the score was 42–50.

After the timeout, FPEH and UTM took turns drawing fouls. UTM’s Jordan Nazarene drew two fouls and gave UTM four points, making the score 50–57. When FPEH dribbled the ball into their offensive zone, Jonathan Harvey of UTM suffered a leg injury and had to leave the court.

Kent Bray shot another 2-pointer, but FPEH got six points in a row. By the next timeout, the score was 54–67.

With 4:45 left to go in the game, the UTM players on the bench started calling for defence and encouraging their teammates to not give up. The encouragement must have been heard, because Andre Woodroffe stole the ball from an FPEH player and got two points for UTM. Han Wang got creative and blocked a shot with his head.

But by the game’s end, UTM still wasn’t able to catch up. UTM came close when they shot five points in a row to bring themselves within seven, but a series of seven fouls drawn by FPEH meant that UTM had no opportunity to make the game closer. The final score was 71–80.

UTM’s top player of the evening was Kent Bray, who had 19 points by the end of the game. Also notable was rookie Jay Adamu, with 9 points.

“The team didn’t perform to [our] expectations,” said coach Ammer Askary. “But it’s still early in the season. We’ve only had a couple of practices, and this was our second game. We’re still rusty and we’re still getting familiar with each other and with the plays.”

“We need to start stronger,” said Jordan Nazarene, who played a solid game. “Our problem was that we didn’t have a strong start and then we spent the rest of the game trying to play catch-up, which didn’t work out so well for us—so for our next game we need to have a good warmup and get out strong.”

Andre Woodroffe, who suffered an ankle injury before the beginning of the season, played his first game. He wasn’t able to train this week or practice before the game.

Next week, UTM Blue will be taking on UTM White at the RAWC. The game, which will be held at 8 p.m. on Wednesday, October 26, is heralded as the “Battle of UTM”.