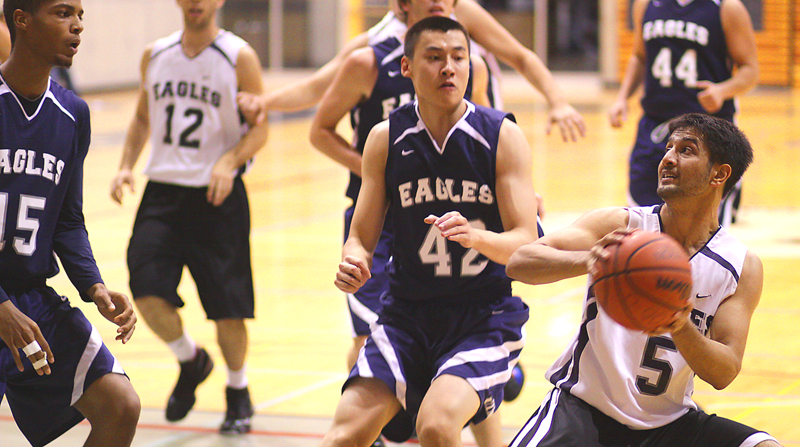 On October 26, the two UTM Division 1 men’s basketball teams faced off against each other. While both teams put forth a strong effort, Blue won by a landslide, with a final score of 75–46.

“We played well as a team,” said UTM Blue captain Kent Bray. “We were focussed; we worked hard. Both teams wanted the win. We came prepared to play together.”

Before the game, the Athletic Council handed out thundersticks to everyone who came out to watch the game. Students used them enthusiastically throughout the game. The audience also had an opportunity to enter a raffle, held after the game was over.

The energy was high in the crowd from the opening tip-off. UTM White scored the first basket. After that, the score went back and forth during the first quarter. White pushed ahead early on with a score of 12–7.

UTM Blue player Jonathan Harvey scored the first 3-pointer of the game, but White quickly countered. Daniel Pinnock of White faked a pass that led to a basket.

With the score 16–10 in White’s favour, Blue took their first timeout of the game. The timeout seemed to work, considering that Blue player Kent Bray scored a 3-pointer early after it was over. UTM White players Daniel Pinnock and Omar Jallow both drew fouls, but Pinnock missed both shots and Jallow only scored on his second shot.

“At the beginning of the game, we felt in control,” said UTM White player Jordan Lisacek. “But the momentum changed, and we came up short.”

The momentum changed when Blue tied the game 17–17 and then pulled away from White when Bray scored his second 3-pointer of the evening. After that, the team never looked back. Blue scored seven points in a row, including a 3-pointer by Luke Makar.

UTM White player Harris faked a pass and gave his team two points, but the score became 35–21 when Blue scored another seven points, including a 3-pointer by Tevin Sutton Stephenson and a skilful layup from Kent Bray.

At halftime, GG Squad entertained the crowd with their breakdancing skills. UTM’s mascot, the Eagle, joined in on the fun.

UTM Blue started the second half of the game by pushing even further ahead. Fedja Kuljanin scored four points and Jordan Nazarene added another two points. In frustration, UTM White fouled Jonathan Harvey, who landed on his chin after attempting a layup. Harvey sunk both his free throws, but left the game less than a minute later because of his injury. UTM Blue Tevin Sutton Stephenson responded by scoring a basket and sinking two 3-pointers to make the score 51–25 in favour of Blue.

With the clock ticking down, Blue player Jordan Nazarene earned an easy two points after White gave away the ball and then failed to run after any of the Blue players.

UTM White seemed to wake up after that, but it was too late for any real impact in the game. Julian Niera of White helped his team to another two points at the end of the game, but Blue ran down the clock as much as they could and the game ended with a 75–46 victory for UTM Blue.

Kent Bray was the top scorer of the game with 18 points. Not far behind was Tevin Sutton Stephenson with 16 points. UTM Blue player Han Wang finished third on his team with eight points.

“I thought our performance was a great team effort. We had three guys hurt that couldn’t play, including one of our top scorers, Andre Woodroffe,” said UTM Blue coach Ammer Askary. “The practice before the game, I said that the winner of this game will be the team that wants to win more. In these types of game it comes down to effort and desire. And we had more of both.”

For UTM White, Ahmed Al-Ansary finished the game with 10 points. He was helped by Manpreet Gill, who had nine points, and Josh Sumi, who had six points.

“We could’ve played better,” said UTM White coach Jeremy Wong. “We were ill-prepared to play this game. We didn’t adjust properly to the game plan that UTM Blue had. It was a learning experience, though.”

“We were mentally ready to play the game,” commented UTM White player Jordan Lisacek. “Both teams have a competitive spirit, and we both wanted bragging rights. Our team was undefeated coming into this game, and we wanted it to stay that way. But, I mean, if there’s one team you want to lose to, it’s UTM Blue. We both represent the same school, after all.”

UTM Blue plays their next game at Scarborough, while UTM White will host Law in the RAWC. Both games will take place at 8 p.m. on Wednesday, November 2.