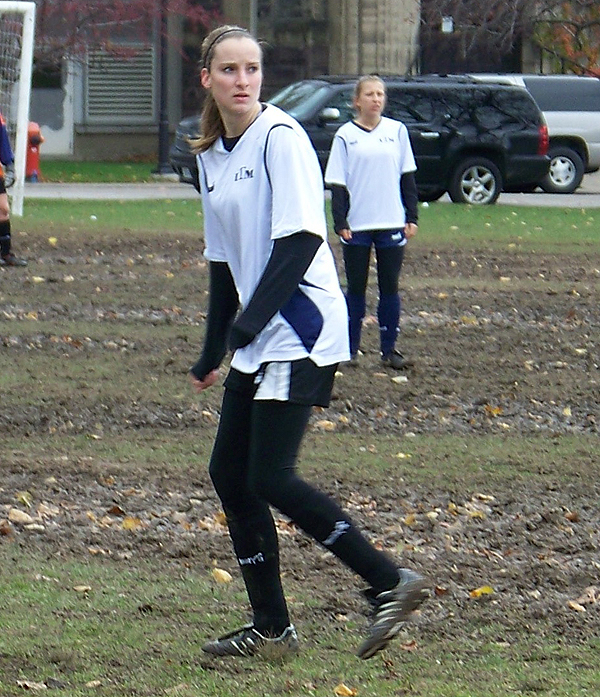 Erin Doane, a 19-year-old Art and Art History student at UTM and MVP award recipient for women’s division 2 soccer, is living proof that a solid athletic background lends itself to opportunities and initiatives in post-secondary life.
Brampton-born Doane worried that her academic performance would suffer during her first year at UTM, but sports was such an important part of her life that she couldn’t think of giving them up.
“I’m glad I didn’t [give up] because games and practices gave me something to look forward to in the crush of essays and projects,” said Doane.
Doane aims to become a teacher after graduation, but isn’t set
on the idea. She wants to explore other opportunities.
In high school, Doane attended Fletcher’s Meadow Secondary School and beat out her toughest competition, her twin sister Devon, to win Senior Female Athlete of the Year.
“I have always been committed to playing sports, so in my first year of university, I told myself I would at least try out for a sports team, no matter how intimidating it might be,” said Doane.
“I looked up the tryout times on the school website and ended up trying out for women’s flag football as well as women’s outdoor soccer. I made both teams in the fall as well as both women’s indoor tri-campus and division 2 soccer teams.”
Doane made the easy transition from life as a high school student-athlete to that of a university student-athlete with the ability to choose teams that fit her schedule. She said her division 2 team was very “cavalier” and not as severe as the tri-campus team, which enabled her miss some games if she needed to finish school work.
Doane finds that the bonds made between athletes in intramural programs are much stronger than bonds made in the classroom.
In total, Doane, who is only into her second university year, has won four intramural championships.
As a member of the division 1 women’s intramural outdoor soccer team, Doane came away with two championship trophies in back-to-back seasons. Her women’s division 2 indoor soccer team took first place in their league, and Doane took home the MVP award for her stellar play.
Her most surprising accomplishment, however, was winning the championship with the flag football team, a memory she cherishes deeply.
When asked about her favourite athletic memory, Doane said, “It was the finals for my flag football team. We were ahead for most of the game, and then near the end of the final half the other team scores and ties it up. At that point, it looked like we’d have to play overtime. The last play was called; we were defending, and the opposite team had the ball. The quarterback on the other team threw the ball to her teammate, but I swooped in for an interception and pushed my way through, to the end zone.”