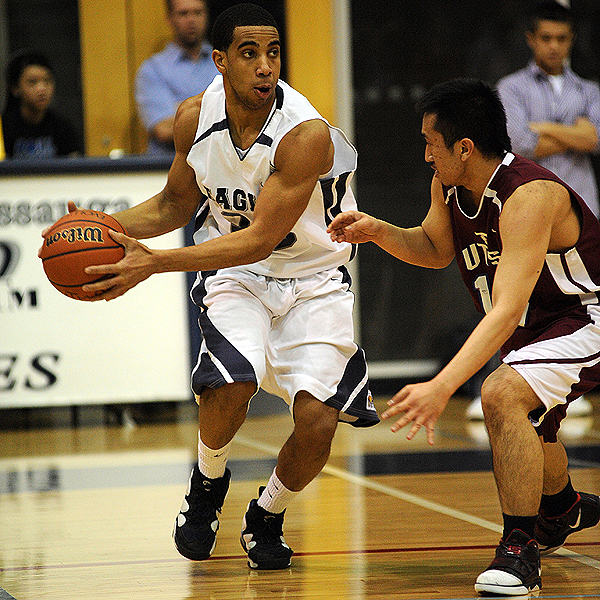 Currently in his third year with a double major in sociology and crime, law and deviance, 20-year old Andre Woodroffe has made many contributions this academic year to athletics at UTM, a school known more for its academic success than its emphasis on sports.
Woodroffe juggles several responsibilities. In addition to his courses, he works as the head coach of the championship-winning women’s division 1 basketball team during the fall semester, the director of Campus Rec & Wellness for UTMAC and has played with the division 1 men’s basketball team since entering UTM.
Many would crack under such pressure, but Woodroffe takes his responsibilities in stride and embraces the challenges he has encountered throughout the year. He believes his dedication and passion for sports is what motivates him to succeed.
“It takes a lot of discipline, will power, time management, prioritizing and also many late nights,” says Woodroffe regarding his hectic schedule. “The easy part is going to the gym, playing and doing what I love.”
His passion and dedication for athletics at the post-secondary level is not all surprising considering he has participated in a wide variety of sports since a young age. When Woodroffe arrived at UTM three years ago, he refused to be the typical faceless student who sits back and lets his university years pass him by. He refers to school involvement as a necessity.
“I’ve been so involved with sports my whole life, playing almost everything from baseball, basketball, soccer, football to hockey. It would be strange for me to come here and not be engaged,” says Woodroffe. “Sports is what I am passionate about and it is something that I will be involved in for the rest of my life.”
Despite the heartbreaking loss that the men’s basketball division 1 suffered during the championship game against Woodsworth, Woodroffe remains in high spirits. He is impressed with the fan support during home games at the RAWC this season and admits the energetic atmosphere helped motivate his team to victory and an impressive 9-0 regular season record.
“We have a fairly solid fan base when it comes to our basketball games. I love playing home games, being in front of family, friends,and fellow students. It really helps and adds another level of intensity,” says Woodroffe “Although we don’t fill the stands, our attendance is impressive considering how academically based our school is.”
Although he has yet to decide what line of work he wishes to pursue when he grows older, Woodroffe still believes that a career playing professional basketball is not out of the question. Being a veteran with the division 1 men’s basketball team, he has worked hard the last several years to develop his skills and improve his game. He idolizes NBA superstar Carmelo Anthony and the way Anthony performs on the court heavily influences Woodroffe’s own playing style. “Carmelo Anthony is the player I patent my game after and aspire to play like,” says Woodroffe.
When asked about his biggest accomplishment thus far at UTM, Woodroffe did not mention his championship with the men’s division 1 team in 2008/2009 or his championship coaching the women’s division 1 basketball team. He refused to pick a particular moment or a particular game he played.
Perhaps remembering the main reason why he attends university, Woodroffe is proud of his ability to handle school work and his athletic responsibilities. In a succinct parting statement, he believes his biggest accomplishment thus far is “being a successful student-athlete and balancing my busy schedule. It’s a tough task and reveals my true character.”