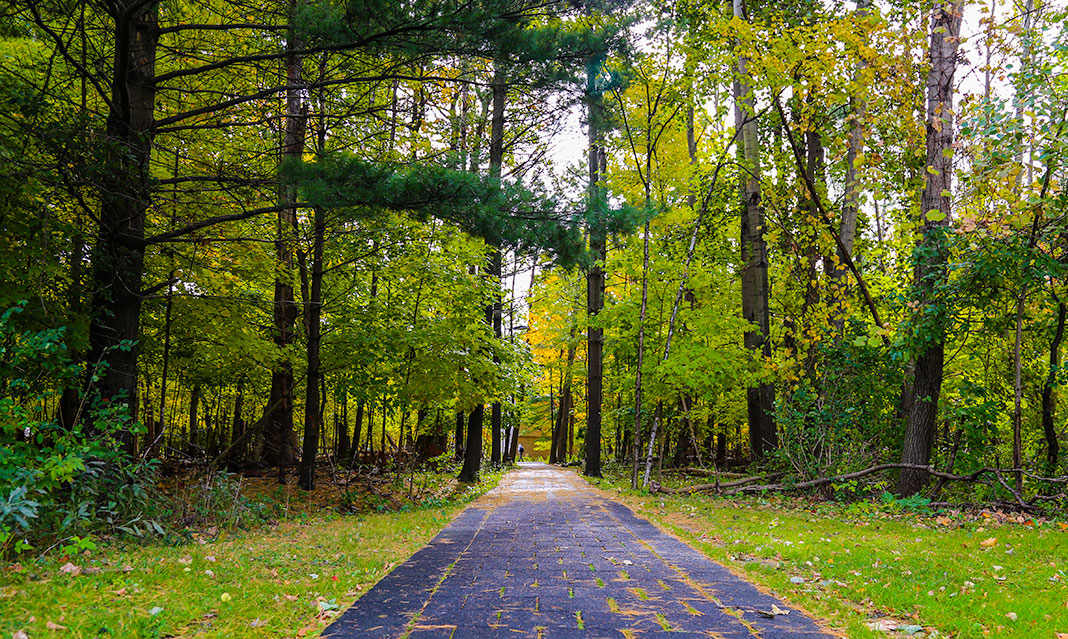 The RAWC took to the woods once again last Tuesday, October 30th for a nature walk. This time the walk was joined by several staff members from the RAWC and led by Cindy MacDonald. The theme of this journey was “Nutrition for Walking” and as usual, a short lecture was provided on this topic along with a short demonstration. However, this time there was show and tell, and MacDonald had brought along a much-appreciated free supply of delicious healthy snacks. Stashed within this royal feast were cups of yogurt, pumpkin seeds, pistachios, nutrition bars and fruits, such as bananas and oranges. While the group huddled around nibbling on their snacks, MacDonald went over some basic nutrition lessons. According to her we should have at least 8 cups of water a day, although about 20 per cent of which is already obtained from food. In fact, we often mistake thirst for hunger, and substitute a need of water with food. MacDonald states that the most obvious indicator of thirst is a feeling of fatigue and water replenishment therefore proves to be a key factor in our daily functioning.

Furthermore, when looking for a more prolonged reservoir of energy, carbohydrates are an ideal source of nutrition. Foods such as whole grain bread, oatmeal or bagels have the exact nutritional capacity to keep the body intact for the long run, especially with an addition of protein. On a shorter time-frame for those quick boosts of energy, MacDonald says nuts, seeds, yogurt and fruits such as bananas and oranges, are a good source of nitro-boost for our body’s engine. However, it is important to realize that foods with a lot of sugar are a poor source of energy, especially on an empty stomach. Although sugar will provide the much-needed peak in energy, it will also lead to a subsequent crash. Another helpful tip was to add variety to your meals with inclusions from all the food groups. Variety is important for keeping your nutrition, healthier and more delicious or interesting over time.

A second and more important conversation regarded mindful eating. According to the concept of mindfulness, people usually have a crowded mind, where they tend to drone on in autopilot to chase their to-do list, or worse yet, are stuck in the anxiety of the future or reminisce about the past. Mindfulness is being aware of yourself and staying in the present to maintain a calm and collected composure. Mindful eating takes this a step further by emphasizing the importance in the ritual of having a meal. Apparently, the body responds well to consumption when it isn’t distracted by the environment. An example includes simply looking at your food when eating instead of watching TV, because the body can activate many of its processes such as a higher production of saliva to better digest the food. This mindfulness extends to all stages of a meal, including buying it, preparing it, cooking, serving and consuming.

For the last part, one must practice many of the basics such as chewing thoroughly, appreciating your food, taking small bites, and starting with small portions. An important facet is activating all five of your senses when cooking or eating food. This includes noticing the aroma, texture, colour, tastes, feeling and even trying to identify the different ingredients or seasonings in the meals as we eat it. Overall, we’re able to pay more attention to the needs of our body and the signals that dictate when we have an appetite and when we’re full.

The walk also proved to be quite meditative. Having the opportunity during this season of autumn to walk through the changing leaves, the crisp air and even along a calm river proved to be quite fulfilling. The RAWC in fact attempts to use a variety of trails during the walks to expose the participants to all of the campus’ unexplored spaces.

This week, the group was allowed to talk to one another and not maintain the quiet silence that was expected during the first Wellness Route. This walk definitely had a communal feeling to it as all the hikers shared collective conversations and stories. Introductions were made, and people connected with each other to get to know their companions. Other than the strawberry yogurt provided initially with the snacks, this may have been the sweetest aspect of the trip.

The RAWC will be embarking on another expedition through the woods for a nature walk on November 6th, led by Nikki Robichaud. This time the theme is set to Yoga where the walk will discuss educational lessons on Asana and allow participants to develop a deeper appreciation for nature with some yogic postures and stances on this mindful walk.