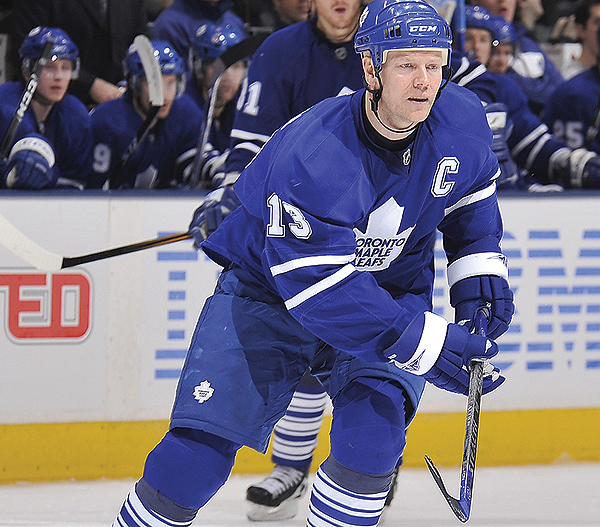 Now that the regular season is coming to a close for the NHL, the Toronto Maple Leafs will have many voids to fill in the off-season. One such void is the lack of a Captain to lead the team. With such a young team, who after Mats Sundin is worthy of donning the “C”?
The most logical choice would be Tomas Kaberle. He is the longest serving Leaf and most of the fans in Toronto love him. Questions remain, however, of whether he will stay after July 1. These questions will put a halt on giving him the captaincy. Also, it has been said Kaberle is too shy and quiet in the dressing room to lead the team and handle a position with the most media coverage.
Around the league, the captaincy has been given to the best player on the team. Sidney Crosby and Alex Ovechkin both wear the “C” for their respective teams. If the Leafs follow this trend, the Captain would have to be Phil Kessel. But Toronto Maple Leafs general manager Brian Burke will likely balk at giving the sniper the pressure of handling the media along with high expectations on the ice. To protect Kessel from the pressure, Burke will simply let him do what he does best: score.
During the 2008 Entry Draft, Toronto traded their seventh pick overall along with two conditional picks to get the fifth pick overall from the Islanders. GM Cliff Fletcher did this simply to draft Luke Schenn. Schenn was quickly named the future face of the franchise and made the opening day line-up.
“[Schenn] is a great young player and I expect him to be a great leader for this franchise for a long time,” said Burke to TSN when Schenn arrived. Burke also refused to trade him for anyone, as he believes in Schenn’s leadership ability on and off the ice.
Schenn, however, is not quite ready to make the step to become the true face of Leaf nation. He is still only twenty years old and has had his fair share of struggles in his sophomore year. Clearly, taking Captaincy is a tough step to make, even for a leader like Schenn.
François Beauchemin is also a candidate for the important position. He is a solid defenceman and a veteran in the NHL. He will be thirty next season and has been an alternate captain for the Leafs throughout the year and was also one in Anaheim behind Scott Neidermayer. He would be a logical choice to lead the team as he is a proven leader and has played under tremendous pressure, winning the Stanley Cup in Anaheim.
When Beauchemin signed with Toronto, Burke called him “a rock solid, steady defender that will add character to our team.” But Beauchemin needs to be more vocal on and off the ice to become the Leafs captain.
The Leafs need a captain who is not only vocal, but also capable of standing up for his team-mates and showing them he is a leader. The easiest and most logical choice, then, is newly acquired Dion Phaneuf. In his first game as a Leaf, he got into a fight in the first period after standing up for a teammate. Phaneuf can handle the Toronto media and makes his voice heard on the ice and in the dressing room. He has all the makings to be a great captain in Toronto and had a great mentor in former teammate Jarome Iginla.
Phaneuf is physical when he needs to be; he can change the pace of a game with a big hit and is not afraid to get into a fight if his team needs a boost. His dominant characteristics make him not only a great leader, but a respected person around the league. Phaneuf also has a tremendous slap shot from the blue-line and a high defensive IQ, making few mistakes when handling the puck or when the opposing team is supplying the harshest of offensive pressure.
Phaneuf is what the Toronto Maple Leafs need as a leader and should be named the Captain sooner than later.