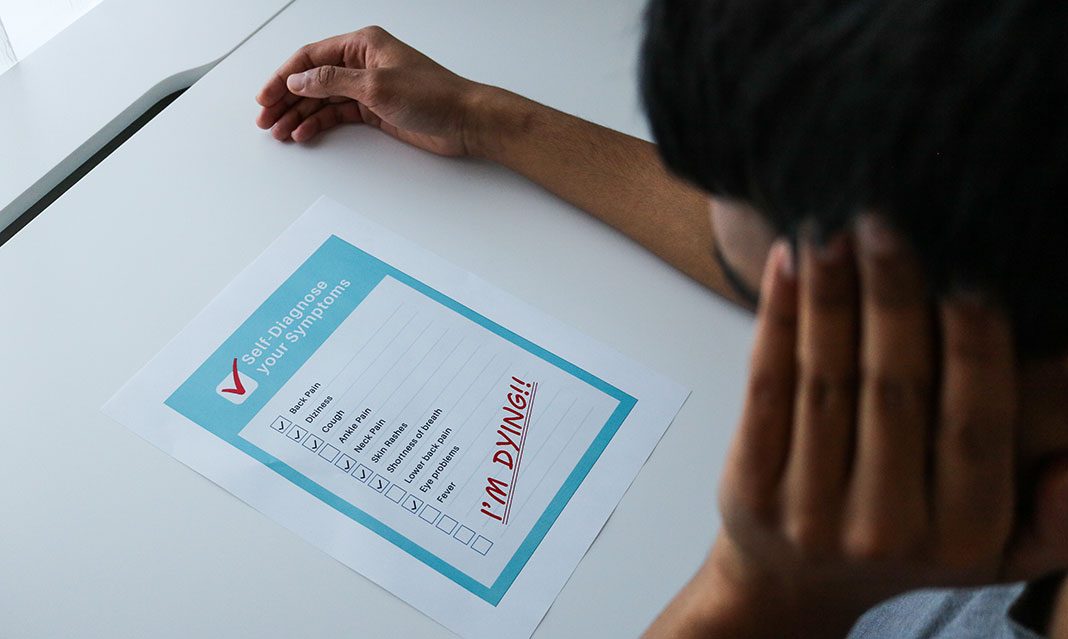 With Google at our fingertips, it feels downright irresponsible to not exploit this resource to self-diagnose one’s symptoms. With the time, energy, and effort one can spend to get an appointment for a limited time with a doctor, it seems far more convenient to Google away your biology. Unbeknownst to most, self-diagnosing consists of its own unique dangers that may end up causing more harm.

To start off, with the spectrum of illness and disorders one can contract, diagnosing requires a very keen eye for the nuances. As an example, patients with mood swings often assume they have a manic depressive illness when it could be a host of other things including major depression, bipolar disorder or seasonal affective disorder. The distinguishing requires a special attention to the quality of symptoms, such as how long the mood swings last and what type they are. The subtleties required in such self-diagnoses could significantly misdirect the patient as well as his clinician.

Another category of such a fallacy is the misinterpretation of psychological diseases with physical health issues. A tumor in the brain could just as easily cause psychological symptoms of depression or psychosis. Such misconceptions in extreme cases can be detrimental. Not to mention, many symptoms, especially visceral are not directly visible. Symptoms such as irregular heartbeats or hyperthyroidism when the body overproduces thyroid hormone. In this sense, self-diagnoses are quite superficial in identifying medical symptoms.

In addition, pain has a significantly poor correlation with tissue damage. Contrary to popular belief, pain is an experience in the brain and can be caused or perpetuated by mechanisms other than physical harm, such as neuropathy where nerve damage even after an injury has healed can persistently cause considerable pain. Another example is phantom limb pain, where following the amputation of a limb, the body continues to feel the excruciating pain of the missing limb even though it’s not there. In this sense, diagnosis of illness is a complex science that requires a deep competence simply not present in a casually superficial self-diagnosis. People also tend to frequently miss comorbidity, where two or more syndromes simultaneously exist within the same person.

Another danger of self-diagnosing is that a lot of people tend to exaggerate their illness. As an example, pain catastrophizing is a characteristic within people who tend to amplify their pain simply based on how they think about it. This is mostly based on their tendency to ruminate constantly and exaggerate their pain, coupled with a feeling of helplessness.

People also tend to prescribe their symptoms to more than one illness. Whereas depression can cause a host of other disorders including insomnia, anxiety and inattention, patients are usually predisposed to assigning these symptoms to separate syndromes such as ADD and sleep disorders.

This proves that patients can be too confounded with biases to make accurate self-diagnoses. Other than pain catastrophizing, patients can also lean towards downplaying their symptoms and minimize their perceptual effect in a state of denial. Individuals too busy or too nervous may avoid medical intervention and instead choose to carry on with their day.

There are legitimate syndromes that individuals usually tend to neglect simply because they are not quite disruptive in their lives. As an example, delusional disorders or personality disorders tend to go unreported as they are not problematic or overly psychotic enough for most people to seek conventional treatment.

Websites and search engines used for self-diagnosing are also based on algorithms that seek to get the most page views out of visitors. Consequently, the most serious types of ailments are provided at the top of the search results. People are naturally more likely to be engulfed by content on cancer than a simple headache. Research shows that these engines are not necessarily geared to provide the most accurate content and that individuals are more likely to walk away with significantly more dread that their symptom is a harbinger of something much worse. There is also a tendency to think that the top search results are more aligned with their symptoms than other illnesses.

Research also shows that few people use significant skepticism when consuming online content for self-diagnosis and roughly half of these end up consulting a doctor. Subsequently, most people tend to take matters into their own hands and try to treat their self-diagnosed illness.

The bottom line is that one should refrain from making significant changes in diet or medication without getting a clinician’s perspective. Self-diagnosing is only beneficial as a starting point and a doctor should be part of the conversation when proceeding to treat one’s health and wellness.