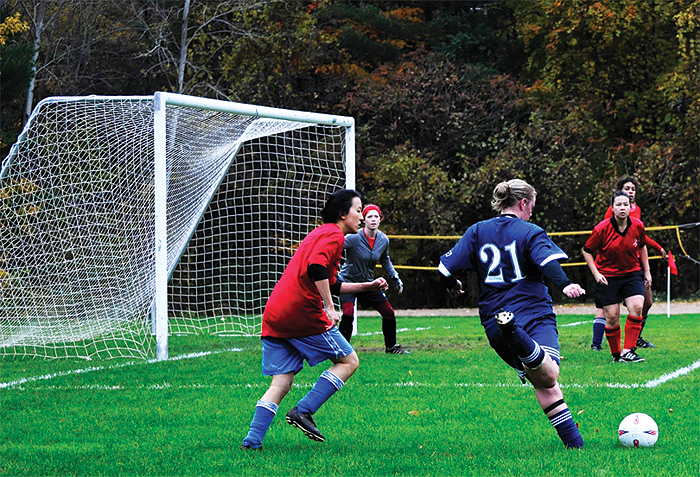 As the wide array of UTM clubs promote their worth outside the Student Centre, it can be difficult for many of them to stand out and appear attractive to the average student. Failure to do so would result in a lack of participation within the club.

To give clubs a chance to demonstrate their potential and to offer students an in-depth look at the various athletic clubs offered on campus the spotlight should be placed on none other than the UTM Soccer Club.

Students without prior knowledge may initially view this club as very ondimensional or that it only offers fun and enjoyment to the biggest of soccer enthusiasts. According to UTM Soccer Club president Ali Karim, this accusation is far from the truth.

The club does not have a specific target audience. We encourage everyone to join, males or females, whether they are top class players or beginners, fanatics or just mild followers, said Karim.

The clubs membership has become quite diverse over the last couple of years. As a result, the executive team is highly dedicated and excited for the upcoming year. Vice-president Nicole Di Nardo is a striker on the womens tri-campus team which demon- strates that the club is not just aimed at males, but females as well.

Soccer is one of the most popular sports in the world. UTMs club is simply a celebration of that. It unites everyone with an interest in the sport, whether they play a lot, a little or simply follow a specific team.

The club is a great outlet to for members to meet fellow soccer enthusiasts, make friends and generally have a great time. In addition, it may be particularly advan- tageous to beginners, who may become avid fans of the sport and its entirety by the end of the school year.

With a wide selection of athletic clubs available, why should they join the UTM Soccer Club? Karim believes the club has variety to offer its members. There is far more to it than just playing a game of soccer in a field or gymnasium.

Playing soccer is only a small aspect of what this club is about. With the World Cup approaching, interest is bound to be higher this year, said Karim. We plan to show live screenings of the UEFA Champions league games as well as World Cup games. We will also be showing some soccer related movies. Members can get into all of these for free.

One event that the clubs execu- tives are particularly excited about this year is the pub night which will be held on January 28. The pub night will build hype for the upcoming World Cup, which takes place less than a year away. Karim promises that there will be many surprises that night — you will just have to attend to find out.
Despite this years aspirations, Karim remains humble and respectful to UTMs various athletic-based clubs. He insists that students should enjoy their uni- versity experience to the fullest and also encourages members of his own club to join other rival athletic clubs.

We are not trying to compete with any of the other clubs and we definitely encourage UTM students to join the other athletic and recreation based clubs, he said.

For those who express interest in the club and want a say in the clubs overall direction, the Soccer Club is currently looking for three executives: events coordinator, advertising coordinator and first year representative. If you have any questions about the club or are interested in filling one of the three vacated sports, email Ali Karim at ali.karim@utoronto.ca for more information.