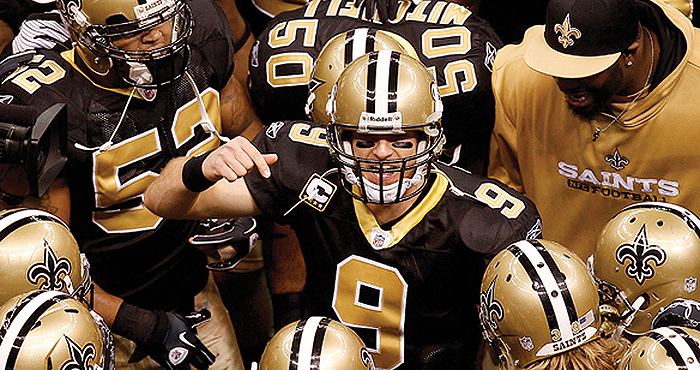 Despite all the ups and downs throughout the recent years, the Saints overcame all odds to become the Superbowl Champions.
In typical Saints fashion, they gave up the early lead to Peyton Manning and the Colts, going down 10-0 in the first few minutes. However, the Saints did not lose focus and Drew Brees played phenomenally. Brees led the way with a remarkable 32 completed passes in 39 attempts, for 288 total yards and two touchdowns. He tied an NFL record for completed passes and with this, was named a deserved MVP.
In the opening kickoff in the second half, the Saints caught the Colts off-guard with a surprising onside kick. With such an unexpected play, the Saints were able to recover the ball and quickly turned the recovery into points. The Saints marched down the field and Brees finally threw a screen pass to Pierre Thomas, who juked his way into the endzone for the first New Orleans touchdown of the game. However, Colts runningback Joseph Addai seemed to be unstoppable throughout the game as he was able to score a touchdown to recapture the Colts lead, making the score 17-13.
The Saints were able to fight back before the third quarter concluded when Saints kicker Garrett Hartley remained perfect from beyond 40 yards to make the score 17-16. Indianapolis kicker Matt Stover failed to connect on a 51-yard field goal to increase the Colts lead to four in the fourth quarter, which opened the door for Brees and the Saints. Brees orchestrated a 59-yard drive, which resulted in a Jeremy Shockey touchdown and a controversial two-point conversion. The touchdown had to be reviewed for several minutes, but passed, pushing the lead to seven points.
Manning had a great game as well, throwing for 333 yards, but made one major mistake in the fourth quarter that sealed the game for the Saints. Looking for wide-receiver Reggie Wayne, Manning threw the ball, but the play was anticipated by Tracy Porter, who jumped the pass and intercepted the ball. He quickly returned the ball for a 74-yard interception touchdown to put the Saints up by two touchdowns, which proved to be too much for the Colts to overcome.
The unknown before the game was the Saints defence and how they could react to the constant changes by Peyton Manning and the Colts potent offence. They were able to silence the critics by shutting down the Colts offence and receiving a timely interception, which was returned for a touchdown.
Once again, Brees was a deserved MVP as he threw 32-39 for 288 yards and two touchdowns. He tied an NFL record for completed passes in any Superbowl. This was truly a Cinderella story as only a few short years ago, the city was underwater when Hurricane Katrina destroyed the city. Both the team and the city were shocked and destroyed emotionally, and the team became the only turning point for many fans. After rebuilding with trades and draft picks, the Saints have truly created a remarkable story. The Saints were able to defy all odds this season and defeat the last obstacle in their way in the Indianapolis Colts, defeating them 31-17.
With the Saints Superbowl win, it appears as though Mardigras begins nine days earlier this year.