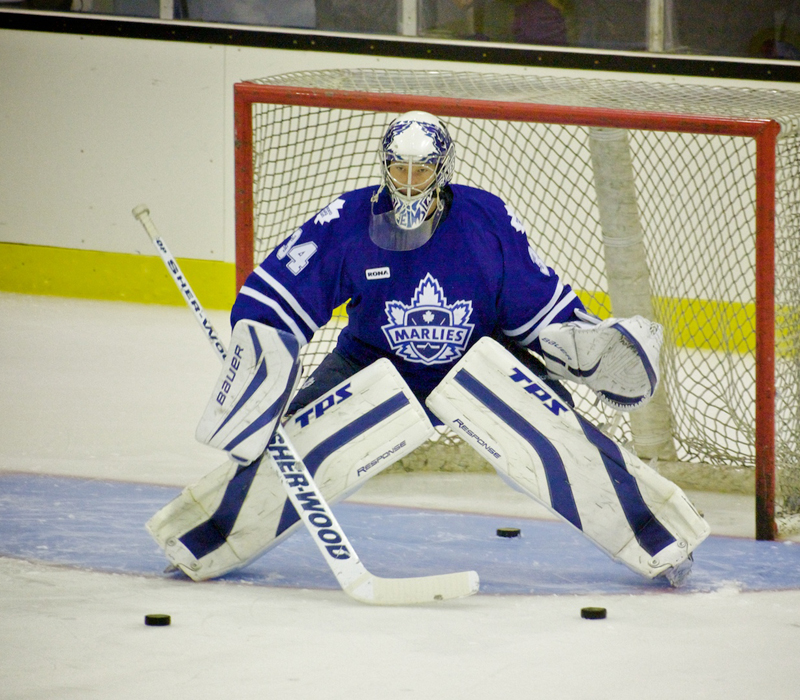 James Reimer started his 11th NHL game last Thursday and made 37 saves, including several outstanding ones in the third period.

Again, he was solid in his game—he’s known for being a calm and focussed goalie—and improved his goals against average to 2.39 and save percentage to .930 despite losing the game in overtime.

Game-winning goal scorer Ilya Kovulchuk complimented Reimer on his game Thursday evening, saying that Reimer controls rebounds well and that it’s hard to get shots by him because he’s a big guy and covers a lot of space.

He has been embraced by Leafs fans and media alike for his attitude towards goaltending: to him, every shot can be stopped. He takes responsibility for letting pucks get past him and doesn’t try to excuse a loss by blaming it on the rest of his team.

The 22-year-old Winnipeg native was drafted by Toronto in 2006 in the fourth round, 99th overall.

Reimer has played 12 games for the Leafs this season, and he is 6-4-2 on the season having played 654 minutes so far. It looks like he’ll continue to play in the NHL as Jonas Gustavsson’s stint with the AHL was put on hold Friday.

Gustavsson was pulled from last Wednesday’s Marlies game due to an elevated heart rate. His conditioning assignment was suspended on Friday as he underwent a minor heart ablation to help treat a condition causing an abnormal heart rhythm. The surgery, which took place Friday in London, Ontario, sets Gustavsson back in reconditioning himself to the same level as most NHL goalies. He can begin workouts starting February 18. At this time, he’s been placed on injury reserve.

Gustavsson was assigned to the Marlies on February 4. He played two games for the Marlies, in which he earned two wins and had a 0.75 GAA and .966 save percentage. However, he was pulled from a game on Wednesday with an elevated heart rate and hasn’t played since.

This week the Leafs play divisional opponents and are in desperate need of wins.  Reimer will be called upon at least once this week and will look to earn his seventh win of his surprising season.