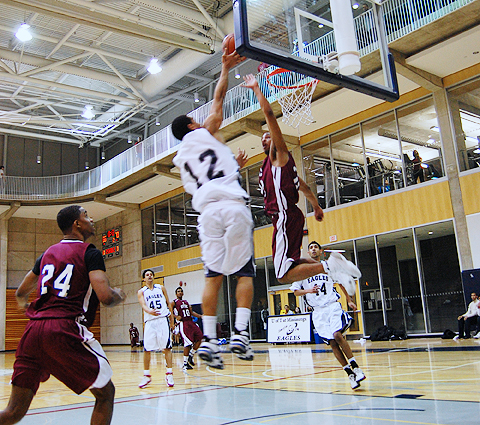 Most university students would kill for a gym with unlimited access to a 25-metre, eight-lane swimming pool, a twelve-person hot pool, three squash courts, plenty of weight machines, a cardio room, a dance studio, a glass-enclosed running track and a high-performance centre with Olympic weightlifting platforms. This gym exists here at UTM. Its called the Recreational, Athletic and Wellness Centre — RAWC for the rest of us — and yet many UTM students fail to make the most of it.

The RAWCs plentiful features and year-round accessibility makes it attractive not only to UTM students, but also to the entire Mississauga community. The university has had little difficulty keeping the facility at full capacity since its opening in 2006, but when it comes to intramurals and extracurricular programs, student participation has been inconsistent.

Whether it is because of a lack of promotion from the department of physical education (DOPE) or the pressures of schoolwork, many students appear oblivious to the activities and programs offered by the school. Perhaps some lack the confidence and motivation to participate, while others might be confused about how certain intramurals function. Whatever the reason, Michael Foley, the program assistant at DOPE, wants to ensure that this year, students are aware of what the RAWC has to offer.

We have a wide variety of sports and programs here at UTM, says Foley. Everything from a mens indoor cricket league to functional intensity training to yoga classes to ball room dancing. There is no shortage of activities and sports for students to get involved in.

The purpose of intramurals is to form a recreational league that is played within a confined geographical area, such as a campus. In order to join an intramural league at UTM, students need to create a team among themselves and gather a specific number of teammates before the scheduled team entry meetings occur. Despite the intramurals first-come, first-served policy, Foley intends to make sure that individual students without a team wont get discouraged or intimidated by the whole process.

Students who dont have a team will sometimes think they cant be involved, Foley says. That is not the case. They can join what we call the Free Agent list in the program office. If enough individuals sign up for that list, a team will be created. If a team is a player or two short they may also turn to the Free Agent list and recruit an individual.

Those who are unsure about certain details should rest assured that Foley and the RAWC staff welcome inquiries. Ive received many questions about ice hockey, Foley says. Students need to realize that there is no charge or rental fee for ice hockey. Just bring your equipment and the school will take care of the rest.

For students who feel too inexperienced or out of shape to join any intramurals, each sports league offers different divisions based on skill levels. Division 1 leagues are for advanced skilled teams that are looking for competition and willing to take the sport more seriously. Division 2 leagues are for beginner to intermediate skilled teams looking primarily to have fun and meet new people rather than partake in fierce competition.

Interest in different sports vary from year to year. Last year, Foley noticed that while some sports were extremely popular in terms of registration, such as indoor soccer, others, such as mens ball hockey, were not.

Other intramurals which continue to rise in popularity are squash and rowing. Squash became so popular last year that the department of physical education is now offering a new four-week course called Squash Lessons for Beginners. The course will be held on Tuesdays from 5:30 p.m. and 6:30 p.m. and will cost $40 for students and $50 for non-students.

The department offers tri-campus leagues; the highest level of league play available within the U of T intramural program. It requires UTM teams to compete against a team from U of T Scarborough and two teams made up of the best players selected from tryouts at the St. George campus. There is a wide range of sports to choose within this particular program including ultimate frisbee, ice hockey and rugby.

For students concerned about the inconvenience of finding their own way to the other University  of Toronto campuses, the university provides transportation to all games played off campus.

Despite all the accommodations provided by the physical education department, some students feel that joining an intramural would be too much of a burden as it takes time away from their studies. But Foley does not want students to think of intramurals as another responsibility.

Students who participate in sports and other fitness activities are making the most of their university experience. Its a great way to meet people and stay in shape all at the same time. Students will find that playing sports, taking a dance class or going for a swim in the pool are all great ways to relieve stress as well, says Foley.

For more information about tryout and team entry meeting dates for intramurals, students can pick-up a hard copy at the Memberships Services Counter, the Control Desk or the Program Office. The information is also available online at http://www1.erin.utoronto.ca/~w3physed/