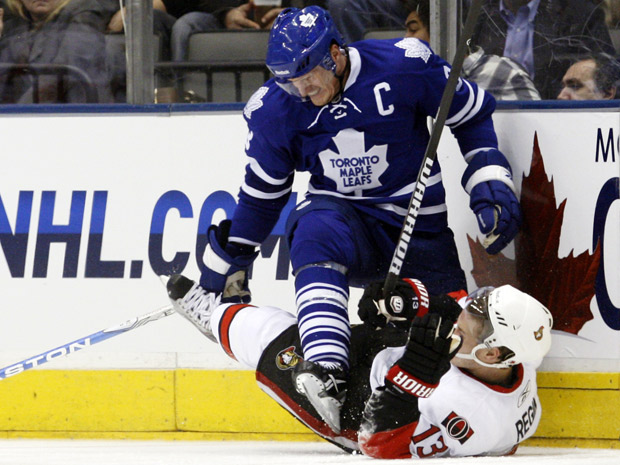 The Leafs are going to be without their captain, Dion Phaneuf, for four to wix weeks, after a laceration in his leg.

The injury occurred on Tuesday night when Phaneuf went awkwardly into the corner with Peter Regin of the Senators. The injury did not look too serious, but as Phaneuf was coming off the ice, it was evident he was hurt badly. He yelled to the trainers that he was bleeding badly and seriously needed attention.

The cut occurred when Regin’s skate blade came up on the inner thigh and clipped Phaneuf just enough to cut him. Wilson was understandably concerned; he said, “You can’t replace Dion and what he brings to the team.” However, he was calm, and told the media, “Other people will have to step up in a leadership role and be vocal… we’ve got a deep defence, very capable of playing well.”

The slice happened to cut a tiny piece of Phaneuf’s medial collateral ligament, which could very easily have been a season-ending injury. Luckily, he only needed a couple of stitches to repair the internal damage, but the main injury was the major incision, which will sideline him for over a month.

This brought up the issue of the NHL introducing mandatory Kevlar-type hockey socks to protect the players’ Achilles tendons. Unfortunately, many players do not wear their socks high enough to protect from the injury that Phaneuf suffered. General Manager Brian Burke commented on the argument saying “I don’t know how you wear a sock on your thigh, this was above the knee. I know some of our players wear them, but I don’t know about Dion. We do encourage our players to wear them. But the reaction from the guys who tried them is that they were uncomfortably warm. It was just a fluke thing that is going to happen again and it happened to our guy.”

Luke Schenn commented on the injury, saying, “No question that sometimes things get dangerous out there—you can go hard into the boards and get injured that way, or sometimes it’s a little thing where a skate cuts you. Sometimes you can’t control it, it’s bad luck. Knock on wood, it hasn’t (happened to him).”

The Leafs will look to Beauchemin, Schenn and Kaberle to pick up the slack on defence in Phaneuf’s absence since they have to move forward with or without their captain.