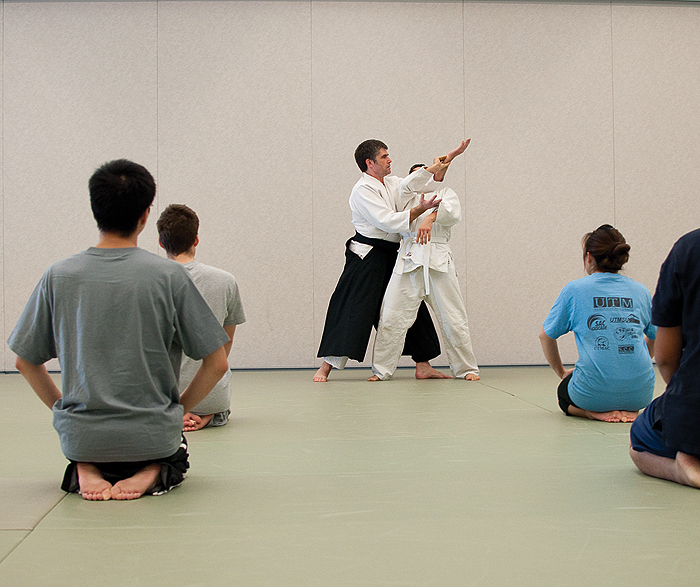 On September 21, we published an article about Aikido that prompted many student inquiries. To satisfy these inquiries, we sat down with Christopher Young, second-degree Aikido instructor, to talk about his martial art. Young teaches Aikido at UTM on Tuesdays from 7:30 p.m. to 9:00 p.m.

1) What did you think of the original article we published in The Medium?

I rather liked it. I’ve never been all that keen on the common translations for Aiki (harmony being the one I dislike most) and the one that most inspires me is a combining of spirits. This one comes from Robert Mustard-sensei, whom I consider a great teacher and who has taught me a lot over the years. He studied for many years in Japan with Chida and Takeno-senseis. From my own point of view, it is the one translation that meshes best with what Aikido is to me.

Even this translation can be interpreted in many ways, and my own interpretation is pretty hard to put into words. What we are trying to learn in Aikido (or at least what I’m trying to learn and pass along to my students) is how to take any force generated by an attacker and work with it. Kind of like surfing. A good ride is all about reading the wave and predicting what its going to do so that you can use the force to your advantage. The wave is going to do what it is going to do no matter what you do, so if you fight it, you will lose. This is Aiki. In the beginning, Aikido is all about pain compliance. As your training progresses, it becomes more about control through superior positioning, and finally it becomes Aiki as I defined above.

2) So is Aikido really about avoiding harm to your attacker?

Well, as for the gentle bit in the original article, I think that the idea that even when someone is attacking you, you should be concerned for that persons wellbeing. In Aikido, the notion that we strive to defend ourselves without hurting our attacker is very noble. To be honest, that notion is also misguided and dangerous.

In the highly unlikely event that I am forced to fight, my attacker’s wellbeing is of little concern to me. I certainly don’t want to hurt anybody, and I never have. I am very careful to make it quite clear to my students, and omnipresent in my own mind, that much of what we learn not only cause serious injury, but can in fact be lethal.

With that knowledge in hand, one must be mindful of what kind of disagreement is worthy of physical intervention. This may sound a bit harsh, and without a much longer explanation, I’m not sure how to convey exactly what I mean, but the question needs to be: Is this disagreement worth killing or dying for? If not, then you should not fight. Period. So in a way you could say that I am concerned for an attackers wellbeing in that I will not escalate a common argument over a parking space or whatever because it isnt an issue worth dying for. This is the idea that learning martial arts is very much about avoiding confrontation. Our ego is an enormous obstacle to our training, and while having the knowledge that you are able to physically prevail in an altercation can be good for your self-esteem, it can have some very negative effects on your ego. No matter how right you may be in an argument, raising a hand to teach someone a lesson is folly. You cannot win an argument by beating someone up.

3) Theres a debate as to whether traditional martial arts are relevant. Many claim that military hand-to-hand combat systems are more effective and easier to learn because they exploit our natural reflexes and have been tested in real conditions. Whats your opinion?

Its a common misconception that systems like krav maga, of which there are many, are somehow more effective than say, Aikido. All the use of force systems that are taught to various military and police forces are for the most part very rudimentary. They all carry weapons and these weapons are brought to bear almost immediately when things get serious. Even a simple stapler seems to be more of a threat than what three trained RCMP officers are willing to deal with when theyre empty-handed. Yoshinkan Aikido is taught to the Tokyo riot police in an intense course that lasts six hour a day for eight months, and to the best of my knowledge, this is one of the very few military forces that provide real, effective hand-to-hand training to their personnel.

There is no such thing as simple, effective martial arts training. It does not exist. In order to get any value from a martial art, you must be able to act without thinking. Its like catching a ball or walking. You learned how to do these things. Even though you know that to catch a ball you must move your hand to the point in space where the ball is going to be, close your hand at the point where they meet and absorb the force, if you have never done it before, you will very likely fail the first time you try. You must block thousands of punches in order to be able to block a punch effectively. There is no other way. To become capable of fending off a vicious attack, you must spend a minimum of six hours a week for a year or so in any martial art. And even then, there are no guarantees.

Its not the particular martial art that matters, but the training. Any Aikido student who has spent time on the mats under a good instructor will be every bit as effective as a student who has studied one of these abbreviated systems for a comparable time. The difference with a true Budo is that this is only the very start of the training. The body of knowledge is so deep that you have to continue moving forward.
The difference between us and other styles of Aikido is that they are comfortable training a method that will not be effective for many years in order to learn the more advanced aspects of Aikido first. I cannot speak for those who pursue this course, but I think it is because they simply cannot see themselves hurting someone, so they will forgo learning how to twist an arm until they can do it without hurting their attacker. Conversely, the most difficult aspect of training in Renshinkai or Yoshinkan is that we learn in a very regimented manner in order to establish a very strong base, where there is very little subtlety but students learn the effective use of force. At some point you must begin to soften and flow in order to progress. Many people have a difficult time taking this next step and end up stuck at the hard stage.

4) What about former or current Aikidokas who claim they had to study other martial arts in order to be effective, for example Brazilian jiu jitsu?

Theres an old saying: Its not the budo, its the budoka. Unfortunately people sometimes learn the wrong lesson from an experience. Rather than face the possibility that perhaps some of them were crappy Aikidoka, they blamed Aikido. Its a poor craftsman that blames his tools.

About Brazilian jiu jitsu, the bottom line is this. The very first UFC (Ultimate Fighting Championship) was a Gracie promotion. The decision was made to put mats down and set some basic rules that, on the surface, were there to protect the fighters, and they were, but they also provided an advantage to the grapplers. But the mats were the big thing. If the very first UFC had been contested on hardwood or concrete, ground fighting would not enjoy the popularity that it does today.

As a sport, MMA (Mixed Martial Arts) is very interesting to watch, and people like the Gracies are very skilled martial artists, but one-on-one fighting in a padded ring, wearing gloves, with a referee and a pile of rules, reveals very little about which martial art is better than the other. In my opinion, there is no best, there are only those who are worse. A highly trained martial artist, regardless of which art, is no one to be trifled with under any circumstances.

5) Do you believe in competition in martial arts?

Competition has no place in the martial arts. It always degrades the art when the focus is moved from improving your skills to proving youre better than someone else. Its all about ego. When you introduce competition, you have to introduce rules so no one gets seriously hurt. What you do in the dojo is what you will do when you are forced to defend yourself. Those rules will impede your ability to defend yourself.
I train Aikido because I believe in the system, and I believe in the system because of personal experience and anecdotes from top teachers. Im very confident in the systems ability to teach the true skills of martial arts. Now and then, I do have serious doubts about my ability to defend myself against someone who has skills that I have never trained. (Ending up on the ground with a grappler, having a boxer stand beyond my reach and hit me faster than I can block, etc). And I always come to the same conclusion. If I continue to train to the best of my ability, the posture, movement and understanding of an attackers dynamics that comes from this training will simply come out when needed.

As a sensei with a lot of beginning students, some who have trained in something else, I’m often punched at or grabbed in a manner that is not the Aikido way, and so far, its been very easy to deal with every time. Now I admit thats not really a test, but I do surprise myself sometimes when I do something I didnt know I could do. Just as a simple example, I picked a fly out of the air the other day. It is not something I spend any time trying to do, and I might never be able to do it again with a 1,000 tries, but I really do believe that it was simply a result of my training. And yes, I have tried a couple of times since, and missed.

I am not so arrogant as to think that I could win any fight, and I certainly am curious just how well I would do, but I try not to dwell on it. There will always be somebody better, but at some point, you will reach a level at which all those that can beat you will not be interested in doing so.

6) Why did you begin training Aikido?

I think deep down, I want to be in control of any situation I’m in. I don’t like bullies and I think I started training partly to make sure no one could intimidate me, but I think it was also so that I could intervene without hesitation when someone else was being bullied. I’m the kind of person who would probably jump in to help whether I had martial arts training or not, but its pretty stupid to try to save a drowning man when you don’t know how to swim.

My wife had started training with Plomish-sensei. She persuaded me to try it. I had been planning on taking Karate, but I gave Aikido a go, and just really dug it.