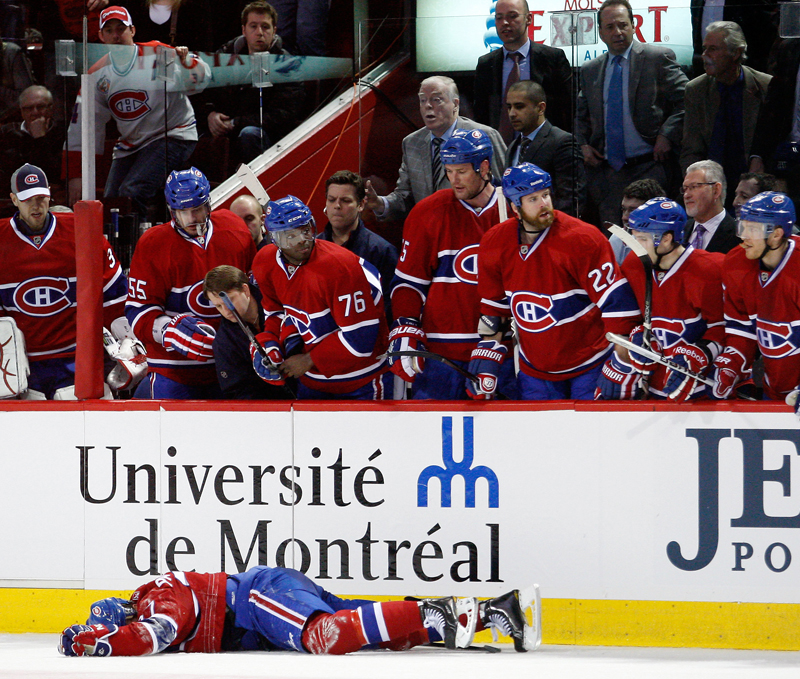 The NHL General Managers held meetings this past week to discuss the ever-growing issue of headshots in the fast-paced game. This is all in the wake of the devastating hit by Boston Bruins defenceman,Zdeno Chara.

On March 7, at The Bell Centre in Montréal, Max Parcioretty had to be carted off on a stretcher because of a simple interference play that forced his head into the partition between the benches. Pacioretty was immediately knocked unconscious and motionless in front of the Boston bench. The play seemed innocent enough. Pacioretty was trying to get around the 6’9″ defenceman when Chara guided him into the partition between the two benches, leaving the crowd and players in silence. Pacioretty, who is just 22, was carted off to the hospital for observations where it was discovered he had suffered a severe concussion and a fractured vertebra.

Head coach Jacques Martin announced the day after that “Max Pacioretty has a severe concussion, as well as a fracture of the fourth cervical vertebrae, but it’s not displaced. Max will remain at the hospital for further observation. There will be no other prognosis for the time being, but he will obviously be out indefinitely. The most important thing for our organization right now is Max’s recovery. We will continue following recommendations from the doctors and, of course, Max and his immediate family would appreciate privacy in this matter,” The following days were a mess for the NHL, as they chose not to suspend Chara for the incident, as it was deemed “a hockey play, with bad consequences”. Many people were torn by the decision, especially Montréal Canadiens fans, who wanted Chara suspended for the remainder of the season, deeming it a blatant intent to injure the young forward.

NHL VP of Hockey Operations issued a statement regarding the choice not to take further action on the Bruins defenceman, stating, “After a thorough review of the video I can find no basis to impose supplemental discipline. This hit resulted from a play that evolved and then happened very quickly—with both players skating in the same direction and with Chara attempting to angle his opponent into the boards. I could not find any evidence to suggest, beyond this being a correct call for interference, that Chara targeted the head of his opponent, left his feet or delivered the check in any other manner could be deemed to be dangerous.” The hit has left hockey at a crossroads as to what is punishable and what is not. Due to the lack of supplemental discipline, Québec has begun a police investigation into the incident. It’s doubtful that that will go far, but it just proves how much the hit has affected everyone in the hockey realm.

The result of the hit was clearly devastating and caused a stir between players around the NHL, with mixed emotions. Many people thought it was legal and unintentional, while others argue that Chara has played in the league for 13 years and knew where the stanchion was and knew what he was doing. Canadiens forward Mike Cammalleri said it best: “Only Chara will ever know (if he meantto do it or not).”

Lost in the abundance of comments were Pacioretty’s comments on the hit, as he spoke out for the first time regarding the incident. The words from the actual victim should have spoken volumes, but they were lost upon deaf ears on the NHL disciplinary committee. He spoke with TSN and said, “I’m upset and disgusted that the league didn’t think enough of (the hit) to suspend him. I’m not mad for myself, I’m mad because if other players see a hit like that and think it’s okay, they won’t be suspended; then other players will get hurt like I got hurt.” Pacioretty continued, “It’s been an emotional day. I saw the video for the first time this morning. You see the hit, I’ve got a fractured vertebrae, I’m in hospital, and I thought the league would do something. A little something—I’m not talking a big number, I don’t know, one game, two games, three games…whatever, but something to show that it’s not right.” A lot of people agreed with Pacioretty, since this lack of suspension means that guiding someone into a dangerous part of the ice is allowable in the NHL.

Pacioretty, clearly outraged, called out Chara: “I heard [Chara] said he didn’t mean to do it. I felt he did mean to do it. I would feel better if he said he made a mistake and that he was sorry for doing that—I could forgive that—but I guess he’s talking about how I jumped up, or something.” Not quite done, he elaborated, “I believe he was trying to guide my head into the turnbuckle. We all know where the turnbuckle is. It wasn’t a headshot like a lot of headshots we see, but I do feel he targetted my head into the turnbuckle.”

Clearly, Pacioretty has every right to think that—it was interference, and it looked somewhat more than a simple “hockey play”. Chara is not a rookie, he’s played hockey his whole life, down 4-0… the list goes on.

The NHL must make the necessary precautions to ensure this doesn’t happen again. The GM meetings have suggested several new guidelines for a headshot victim, but nothing has been set in stone yet. Hopefully the NHL can figure out how to eliminate these types of hits, before someone dies on the ice.