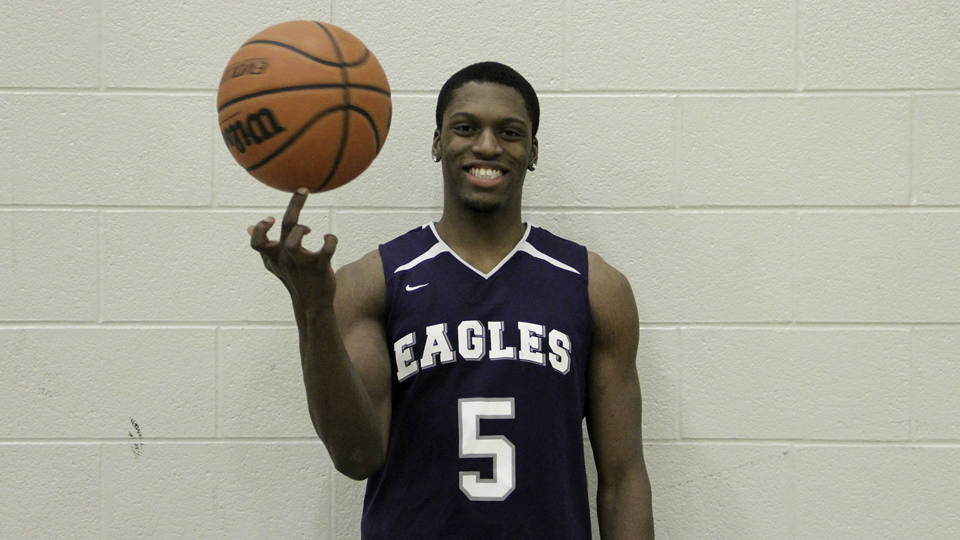 Winning a game of one-on-one basketball wouldn’t be an easy task for any opponent who challenged Austin Chambers. Austin’s outstanding athleticism and determination are apparent every time the point guard steps onto the court with his Division 1 UTM Blue squad.

The 20-year-old business management student from Ajax first fell in love with basketball at the age of 10. “Once my dad bought my first outdoor hoop, I would spend all day shooting and practising on it,” says Chambers. “Ever since then, playing basketball has been my absolute favourite thing to do.”

The second-year student has dedicated his life to the love of the game. “Growing up, I would usually play on a school team as well as a club team,” he says.

For many students living on campus, there’s a thrill that comes with living independently for the first time, and doing so at a prestigious postsecondary school is important to both Austin and his family. “Playing basketball has drastically improved my experience here at UTM,” he reflects.

Like many UTM students, Austin likes being part of an athletic team while getting to meet new people and enjoying the company of those who share the same interests. “It’s [basketball] that I love doing the most and it has led me to meeting many amazing people,” Chambers says.

Especially during midterm and exam season, using sport to relieve stress has helped Chambers’ performance in the classroom, he adds.

Even though Austin has a full-time commitment to his schoolwork, he feels as though a commitment to his athletics has made him better at planning a schedule and managing his time. “If I notice on my schedule that there will be any conflict, I’m still able to complete my schoolwork ahead of time,” he says. “I feel like I do a great job of balancing the two because it’s something I’ve been doing since I first started playing basketball.”

Chambers spends his downtime at the RAWC preparing himself for game day and preventing injury. “I take full advantage of the weight-training facilities here at UTM, and I spend almost as much time lifting, foam-rolling, and stretching as I do actually playing,” says Chambers.

Confidence is key when it comes to being a successful athlete, and in addition to having strong physical attributes, there’s a mental toughness that comes with playing. Austin is known for his ability to drive the lane, complete slam dunks, and shoot the difficult three-point shots. “I have the speed and ball-handling ability to get by any defender or hit shots from pretty far past the three-point line if the team plays zone. One thing about me is that I absolutely hate losing.

“After graduating, I’m going to play professionally and continue enjoying this game that I love so very much,” Chambers continues. Even though playing professionally is Austin’s dream, he knows that having a back-up plan is imperative. “I also plan on earning my MBA so that I will have something to fall back on once my playing days are over.”

Austin has great ambitions for the future, but right now his goal is to lead his team to championship. The UTM Eagles Blue team currently sits in the fifth spot in the Division 1 league, with a 5-4 record. They’ll take on their on-campus rivals, UTM White—in first place with an undefeated 9-0 record—on Wednesday, February 12, with tip-off at 8 p.m. at the RAWC.