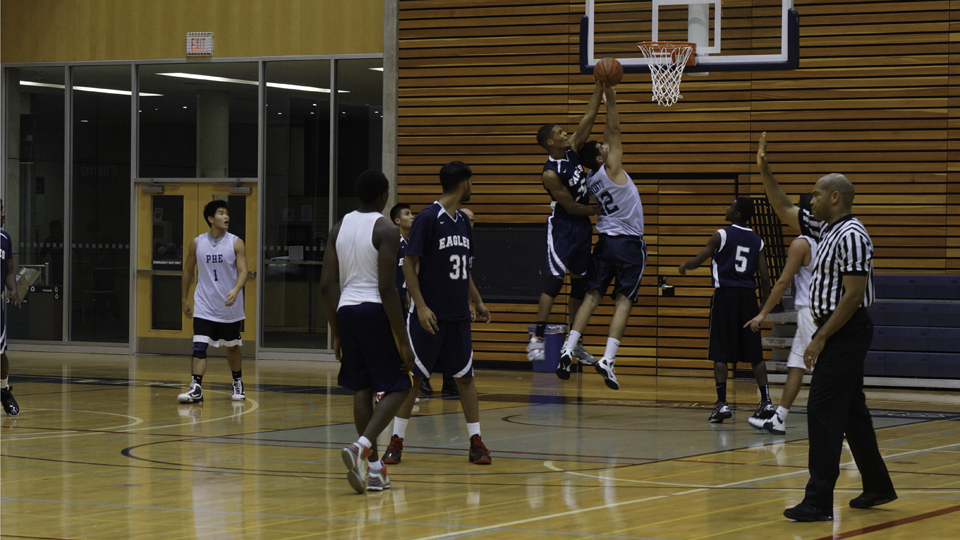 The UTM Division 1 Blue men’s basketball won their second consecutive game with a blowout 89–65 victory against the Physical and Health Education team. The Eagles were looking to improve their 1–1 record; after their unconvincing win versus New College, the Eagles fared much better this week.

Last time the Eagles took to the court, it was clear that the new players hadn’t integrated well into the team, and there were visible flaws in the offensive plays. There weren’t too many flaws this time, and the Eagles put on an entertaining display for fans. They put their foot on the pedal right from the start and never looked back.

Power forward Tevin Sutton-Stephenson, whose shots were falling last game, set the tone early with a score and a foul that sparked both teams into action.

The first half was played at a quick tempo, with both teams running up and down the court and getting layups. The Eagles played a tougher defence than PHE and ended up forcing more turnovers, while their jump shots fell from both the two-point and two-point lines. The Eagles went into half-time with a 49–33 lead.

In the second half, the Eagles blew the game wide open with good offensive and defensive plays from the new players coming off the bench.

Shooting guard Terrel Subban showed off his strong playmaking, dishing out assists to his teammates, who were knocking down shots. Solid defence and good rebounding from centre Jordan Nazarene allowed the Eagles to push up the court more to get easy baskets.

Strong drives to the basket from point guard Peter Bui allowed for other players on the team to have open shots, and efficient three-point shooting from guard Victor Dang put the game out of reach for PHE.

The fans cheered as the game drew to a close. Both the players and the coaches were pleased with the performance of the team.

“We played well. We haven’t played like this all season; it felt like everything was in sync. The team chemistry came through and shots were falling,” said Anisha, Balla, the Eagles’ assistant coach.

Sutton-Stephenson finished with 25 points, the highest on his team. “I started off the game aggressively and got the team rolling. We had strong play from the bench and we spent a lot of time in preparation for the game,” he said. “I spent time before the game taking about 200 shots to get [my] limbs loose.”

The Eagles have played two home games in a row, and will play their next ones away from home. Now that their chemistry is forming and the shots are going in, the Eagles are going to be a hard team to beat this season.