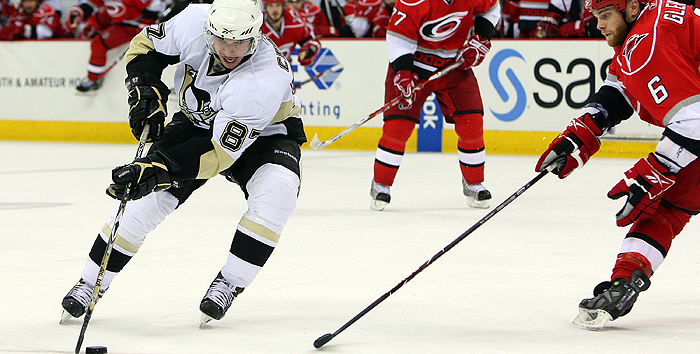 With the regular season having just begun, there are many predictions. One thing is certain: as soon as the puck drops on opening day, the Eastern Conference is going to be fast and furious. Teams will need every point possible to make the playoffs.
The defending Cup Champs should lock up first place with ease in the East. The young guns of Pittsburgh are still together and do not show any signs of slowing down. Marc Andre-Fleury is coming off one of his most impressive seasons to date and should be one of the top backstops in the league this year after a solid playoffs. Jordan Staal will continue his strong two-way play and help Fleury on the defensive end.
On offence, Sidney Crosby is due for another 100-point season. He is only surpassed by Evgeni Malkin, who will lead the league in scoring for the second consecutive season. Jordan Staal will continue his strong two-way play. Together, they should easily secure the first seed in the East.
Fellow Russian Alexander Ovechkin should lead the league in goals this year. His performance on ice and passion to win will take the Caps to the playoffs. With rookie goaltender Semyon Varlamov battling for the number one spot with Jose Theodore, the goaltending on the Capitals is not a concern this season. Varlamov had an outstanding playoffs; he’s expected to start more games than Theodore. They have good goaltending and clear scoring prowess; expect their team to finish second easily.
On the other hand, Boston will struggle but secure third seed with a division win in the Northeast. In the off-season, they traded Phil Kessel but acquired Michael Ryder to play with Marc Savard. Their defence will be physical with Zdeno Chara and Dennis Wideman expected to lead the way on the back end. In net, Tim Thomas proved he was NHL-worthy last year and will now lead the Bruins to a third seed.
Fourth seed is more difficult to predict but should be taken by Philadelphia. The resurgence of Chris Pronger and Ray Emery will revive the Flyers and give them much needed physicality on the blue line. They will also have great scoring from a recovered Simon Gagne. This team will strike fear into the league with their snipers taking the advantage with many counter attacking goals.
Right behind them in fifth should be the Montreal Canadiens. They added several new faces to the team in the offseason. After losing Captain Saku Koivu and sniper Alexei Kovalev, they added Scott Gomez along with Mike Cammalleri for a much needed offensive boost. These players add scoring depth and leadership on the ice but the defence is expected to be inconsistent. Carey Price, however, should have the best season of his career and will help bail the defence. With Price, the Canadiens should finish fifth.
Right on their heels are the Buffalo Sabres, a team to watch out for this season. Ryan Miller will be solid in between the pipes again. Thomas Vanek was a disappointment last season, but aims to turn his fortune around this season. Look for at least seventy points from Vanek and sixty from team-mate Jason Pominville. They have a solid powerplay and a decent penalty kill.I If they stay out of the box, they should squeak in the playoffs in the sixth spot.
The penalty kill of the New Jersey Devils will be exceptional this season because of Martin Brodeur. He has backstopped the team to the playoffs numerous times and should do so again this season. Scoring was an issue last season for the Devils and continues to be problematic as they lost Brian Gionta in the offseason to free agency. However, leading scorer Zach Parise is still in red and needs another stellar season of at least eighty points in order for this team to make the playoffs.
If Brodeur and Parise manage to stay in good shape, they will make the seventh spot. That leaves the final playoff spot to be battled for by Carolina and the Maple Leafs. Cam Ward and Eric Staal must carry the team again this season for a chance at making the playoffs. If one of them misses any action due to an injury, a shaky defence and mediocre second powerplay unit that falters down the stretch will shatter their playoffs dream.
This leaves the window open to the Maple Leafs. They acquired big names such as Mike Komisarek and Phil Kessel, adding a much needed offence, physicality and solid defence. Despite a bad pre-season, Vesa Toskala will be solid this year in net. The Maple Leafs have much better powerplay and they will fight for the eighth seed.
Also expecting to battle for a playoff spot are the Islanders. They acquired John Tavares through the draft and managed to sign goaltender Martin Biron. However, this team is still too weak to compete for a spot in the postseason. Along with the Isles; the Senators, Thrashers and Lightning will miss the playoffs this season as scoring and goaltending will falter down the stretch.
One thing is certain: this season will prove to be most exciting for the Eastern Conference.