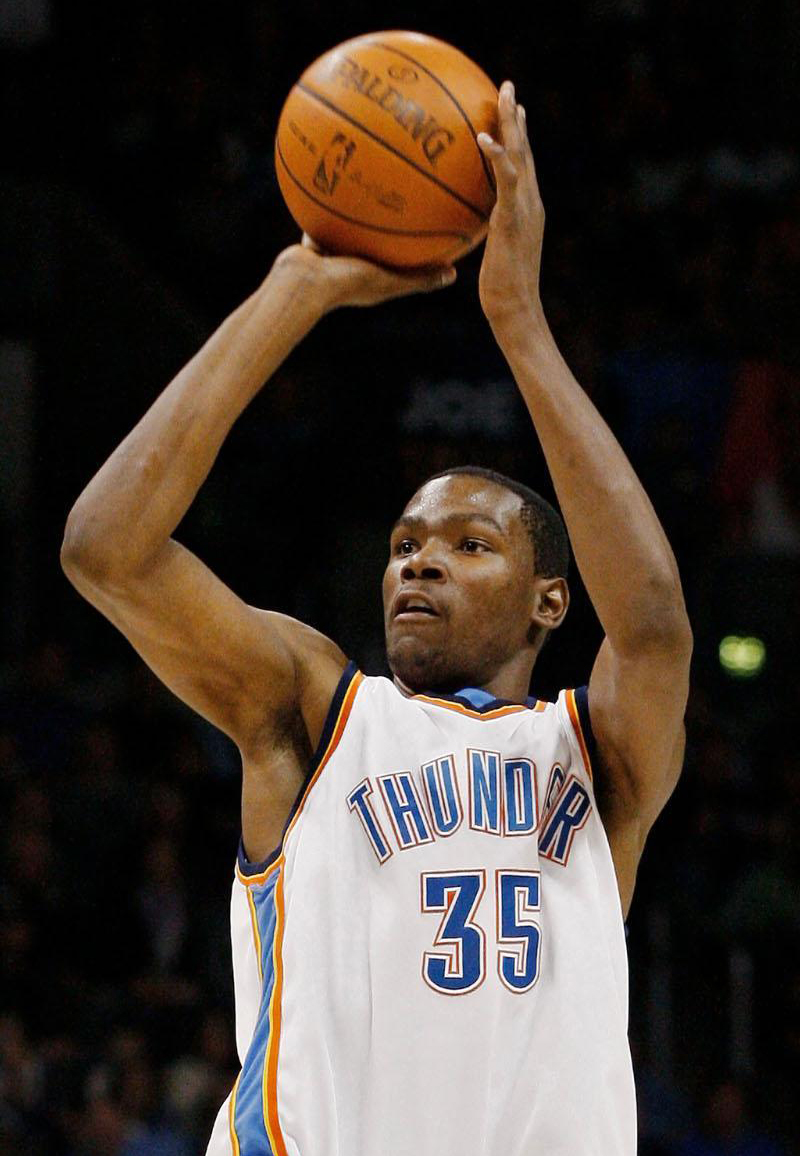 The NBA MVP: Kevin Durant. KD has become the premier scorer in the NBA. He is averaging around 29 points per game and would leave the Oklahoma City Thunder hosting a playoff series if the season were to end today.

Durant is not only leading by example on the court by hitting ridiculous shots, he is slowly becoming a more vocal leader and realizing that he and the team now have targets on their back. Durant, a mild-mannered, quiet guy, had an interesting altercation with Chris Bosh not too long ago and showed that he isn’t going to allow other players to get in the faces of his teammates. KD is on his way to a hall of fame career, and if the Thunder can hold down the fourth seed or better in the Western Conference, I don’t see how he wouldn’t win the MVP trophy. Runners-up: Derrick Rose, Dirk Nowitski.

Defensive Player of the Year: Dwight Howard. Yeah, surprise surprise… Howard is the best centre in the league, and no one alters an offensive game plan like Howard. He is averaging 13 and a half rebounds with two and a half blocks per game. His blocks are a bit down this year, but it’s not his fault. Opposing teams have decided to stop driving on this guy and are taking 10-foot jumpers and three-point shots instead. He is the catalyst to the Magic’s game plan, and Orlando is once again one of the top teams in the Eastern Conference. Runner up: Kevin Garnett.

Rookie of the Year: Blake Griffin. If you read my previous article, you know that I am a big Blake Griffin fan. He is averaging almost 23 points and 13 rebounds a game and has put the Clippers back on the map. Usually, halfway through the season we’re asking who the Clippers might select in the NBA draft, but this year is different. Griffin is the anchor of the young Clippers team, who are competing in many more games this year; and in January they defeated both the Miami Heat and the Los Angeles. Griffin is the king of highlights this year and the fact that he is coming off knee surgery which ended his year last year makes this all more impressive. Runner up? It’s not close.

Most Improved Player: Kevin Love. This pick might be of some controversy, because the argument against Love is that he plays on a terrible time and his stats are inflated due to “junk time”. But let’s look at the numbers this year compared to last year: 22 points per game this year vs. 14 last year; five more rebounds this year; shooting 45% from three-point territory; and his overall field-goal percentage and even his free throw percentage is up this year. Runner up: Eric Gordon.

Sixth Man of the Year: Glen Davis of the Celtics. He’s averaging 12 points a game; I bet no one saw that coming. And his defence and jumper have greatly improved.

Coach of the Year: Tom Thibodeau of the Chicago Bulls. He has had to deal with significant injuries to his three best players, and the Bulls still have over 30 wins before the All-Star break.