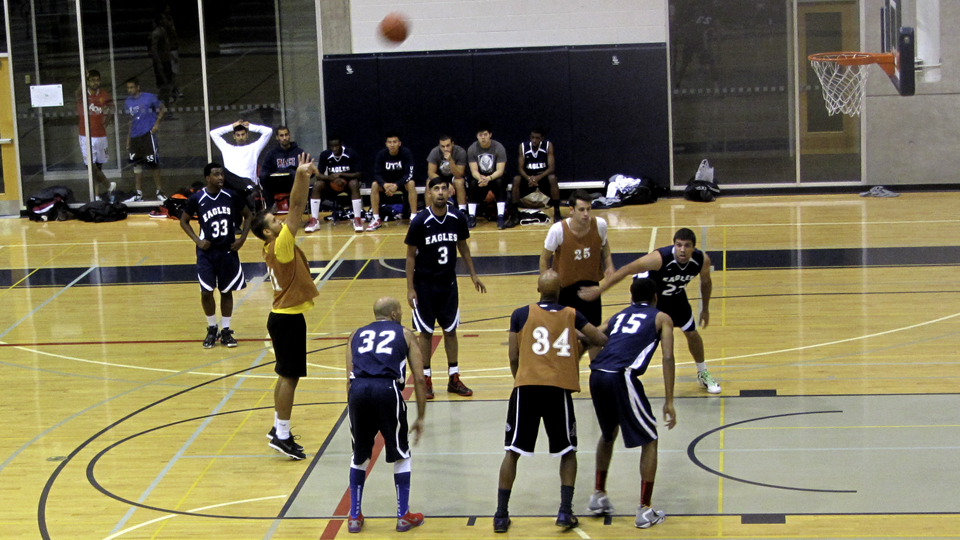 UTM’s Division 1 Blue men’s basketball picked up their first win of the season with a 67–49 win over New College. After having lost their first game of the season, the team was on a mission to get their first victory in front of a home crowd at the RAWC.

With all the new players, the team hasn’t had a chance to really come together yet, as was clear right from the beginning of the game. There were missed plays and the team resorted to taking difficult jump shots that weren’t falling. This slow start allowed New College to find their rhythm, and for most of the first half the Eagles were outhustled on both offence and defence. The Eagles were led in scoring by veteran Osama Abdelkader, who ended up 12 points. The teams went into halftime tied at 24–24.

The Eagles found new life in the second half while their opponents grew tired. The crowd was cheering when, halfway through the second half, the Eagles’ defence kicked in. Hands got in the passing lanes and the fierce defence only allowed contested jump shots. New College’s shots bricked and their players were getting increasingly frustrated.

Efficient bench play from Joseph Adamu and strong rebounding from both Tevin Sutton-Stephenson and Faiz Ahmed allowed the Eagles to push down the court and get easy points. This strong defence and the easy shot attempts led to an 8–0 run that brought the Eagles out of reach.

Close to the end of the game, the new players on the team started playing their roles very well, leading the team to play more fluidly. Jonathan Harvey took control of the game close to the end, and as the opponents tired out, Harvey put on the finishing touches with a two-step spin move and finger roll—all on the eve of his birthday.

After the game, the players and coaches shared the same sentiments.

“We played below expectations, and it was a slow start for the boys. There are a lot of new faces and there is still a lot of work to be done,” said UTM’s coach, Ammer Askary.

“Not our best game, but we pulled it out in the end,” said Harvey, the Eagles’ scoring guard.

“At the beginning of the game they could have played better, but by the second half, they were the Eagles I came to see,” said Napta Elsadig, a third-year psychology major who regularly spectates at Eagles games.

The game ended in a victory for the Eagles, but this playing is not going to get them through the playoffs. Against a better offensive team, the Eagles could be in for trouble if they get off to another slow start like this. But as long as they fix their offensive glitches, this team could go all the way.